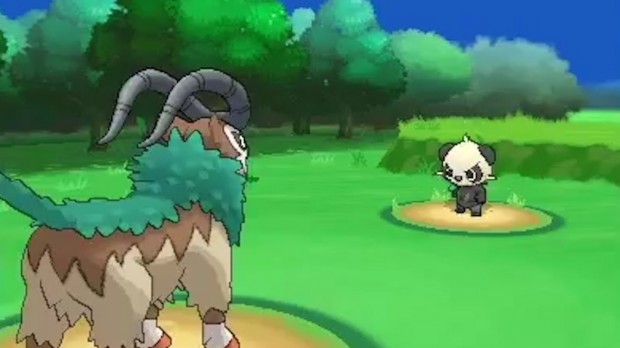 When I was growing up, Pokémon Red and Blue were the single best reasons to own a Game Boy, and after playing through Pokémon X and Y, it’s safe to say that not a lot has changed.  With a greatly improved multiplayer functionality, a more sophisticated battle system, and beautiful 3D environments this game is everything fans could have hoped for and more.  Players can look forward to traversing a brand-new region, engaging in hundreds of battles, and catching more Pokémon than you could shake a stick at. All-in-all, Game Freak has provided an evolution to the series that is super effective.

If you’re reading this, then you’re probably familiar with the Pokémon formula, but what has changed with Pokémon X/Y?  The biggest change, and the most immediately apparent, are the graphics.  For the first time since the series first launched nineties, the game’s presentations has been completely reworked, and now features full three-dimensional animation that can be admired when the player is exploring Kalos (Pokémon ‘s newest region of the world, that has been inspired by France), or during Pokémon battles.  The animation is some of the best seen on the 3DS, and the series’ overall aesthetic presentation has been improved upon more than any game has before it.

The second thing that players will notice, also pretty early on in the game, are some of the sweeping changes to gameplay that have been made, and there are a lot.  Whether you’re interacting with other players via the Player Search System (PSS), indulging in Pokémon Amie, participating in a Sky Battle, being drawn into a Horde Encounter, boosting your Pokémon via Super Training, learning more about the new Pokémon fairy type, trying out Mega Evolutions, or customizing your trainer’s appearance there are noticeable improvements at every turn.

The Player Search System is by far the most important change, which improves upon the system introduced in Pokémon Black/White versions, and succeeds in making the Pokémon experience constantly connected.  Through it players can trade Pokémon , battle one another, and help one another out via activating buffs called “O Powers.”  The whole system works pretty seamlessly.  When I was near a WiFi connection, I saw other players in my area automatically and the game proactively gave me opportunities to interact with them throughout the game.

Pokémon Amie is a mini-game that is a lot like Nintendogs for Pokémon that doesn’t add much to the game, but also isn’t mandatory to play.  Sky Battles take the arena to the sky, in which only flying Pokémon can participate, while Horde Battles draw the player into a random encounter with as many as five wild Pokémon confronting the player.  The new fairy Pokémon type continues to expand the options for players, and gives dragon-type Pokémon a weakness to contend with.  However, I suspect that the most beloved improvement will be the mega evolution feature, which allow a trainer to further evolve certain Pokémon for a single battle, which adds some added strategy to the battle system.

The storyline in Pokémon X & Y is rubbish. It involves your player becoming a Pokémon master by defeating gym leaders, which should sound familiar, but this time the antagonists are the well-dressed Team Flare, and their leader who is basically Poke-Hitler.  In the villain’s quest to “wipe the world clean” and “make the world more beautiful,” the player stands as the only thing between peace and Poke-Murder, and it involves an ultimate weapon, a legendary Pokémon, and an apparently immortal being.  The story has never been the game’s strong suit, so this is mostly forgivable, but I would have liked to see a great storyline enhance this already impressive game.

One of Pokémon X and Y’s greatest strengths are that it has been sped up to be less of a chore than previous iterations.  For example, the player is given Exp. Share in the games first hour, as well as roller skates to speed up movement.  It also seems to be meant to be played straight through without any grinding, as none of the areas are significantly more difficult than the last area, so I was able to rush through or stop to smell the roses at my perusal.  However, this strength is also one of its biggest flaws, because it means that the game isn’t very challenging…at all.  I played through this game twice, without paying much mind to strategy, and never lost a single battle.  Granted that I’m no beginner to the Pokémon franchise, but I recall my days of fighting the Elite Four in previous games as being much more challenging, and feeling much more accomplished when I finally defeated them.  The biggest issue seems to be the AI, which doesn’t respond to the player’s decisions at all. I often fought trainers that pulled out a water-type to fight my grass Pokémon without a second thought to the beating that they were about to receive, and it would have been nice if the AI trainers took the mechanics of the game into account during battles.

The sound in Pokémon X & Y is better than any game before it.  The music has some of the same iconic scores that players will recognize with new stuff mixed in, and doesn’t become repetitive as quickly as past Pokémon titles.  The sound effects are greatly improved, and add impact to battles.  Most importantly, the sounds that your Pokémon make during battles are no longer strange, electronic screeches, but rather a large library of individual sounds that fit in with the Pokémon that you’ve selected.

I played Pokémon X and Y in their entirety, one playthrough which lasted about 40 hours, but I took my sweet time, and the second run which had me at the credits in about 20 hours, and I can tell you that the differences are few.  From what I could tell, there are only a handful of version-exclusive Pokémon, and no other differentiators.  Pick the legendary Pokémon that you like best, or your favorite letter, or flip a coin and just play the game.

Pokemon X & Y set a new standard for Pokemon games to come. The advances in this game are well worth the $40, and if you're interested in the online aspect, I'm happy to say that it is booming and has hours of entertainment to offer. It has improve upon the series in almost every way, so if you're a fan who has been dragging your feet to buy X or Y, because they've been waiting for one of the games to finally break the monotony and change the series in some major ways, then this is the game you've been waiting for. There has never been a better time to set out on the never-ending quest to Catch 'Em All.