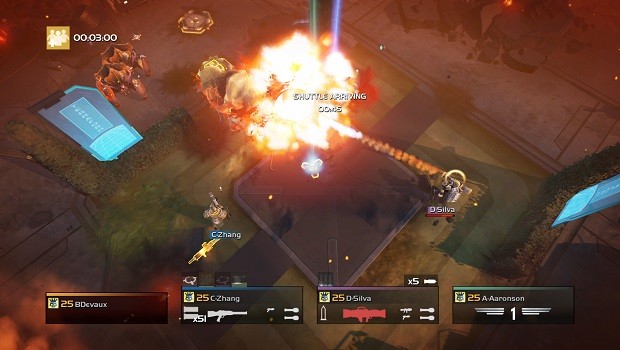 I’m always on the hunt for a good cooperative multi-player game, but sadly they are far and few in between. I tend to disagree with what other people consider a good co-op game because often times it’s simply a good single-player concept that happens to scale when you add more players to the mix. It doesn’t feel very much like teamwork, in most cases. It’s more like there are multiple people doing their own thing but with a common goal. That’s not the case in Helldivers, though. You need to teamwork your ass off if you want to survive.

The missions start out on the easy side, accurately labeled “A Dive in the Park”, giving you a chance to acclimate to the control scheme. You’ll get a chance to try out various weapons that perform surprisingly different – you’re not going to play the same way if you’re strapped with a laser beam cannon as you are with a shotgun or an automatic rifle. The guns have different recoils, clip sizes, ranges, and so on.

Guns will be your primary source of destruction in most cases, but there’s also various types of grenades and, more uniquely, stratagems. Stratagems, otherwise known as spells, abilities, or special attacks in most games, are a big part of what sets Helldivers apart from other action games. Stratagems cannot be expended on the fly like, say, Diablo 3, with only a cooldown to worry about; Helldivers is unwaveringly focused on timing and positioning and, as such, makes you sing for your supper.

In order to use a stratagem you have to hold its assigned button down to open the list of stratagems at your disposal, at which point you have to enter a button combination on the d-pad to execute. Each stratagem has it’s own button combo. You then need to decide where you want the stratagem to perform its action, which depending on if it’s a defensive, offensive, or support type, you’ll want to be careful about where you place it. For example, one stratagem calls an airstrike, which is great… unless your teammates are caught in the crossfire. How about a defensive stratagem, like a plot of landmines? But you placed them too close to the building you’re trying to capture and now, again, your teammates are suffering due to your negligence.

The difficulty doesn’t take long to ramp up and suddenly your facing an onslaught of alien enemies, relying on your reflexes and your teammates to stay alive. I spent a fair amount of time playing solo, and though I haven’t experienced the higher difficulties yet, I’m convinced that you need other human players to progress at that point. Team work doesn’t stop at simply covering all possible angles with gunfire, the mission objectives will have you activating things like SAM sites which require multiple phases of button combinations, each phase challenging you with longer combos, which leave you vulnerable to attack.

The cooperative aspect of the gameplay has been masterfully crafted. The game doesn’t allow you to stray far from your squad since there’s no split-screen mode, but you wouldn’t want to wander away even if you could. The idea of not being within a healthy range of your squadmates is terrifying since it’s so easy to become surrounded by enemies.

Fighting alongside people is a rather endearing experience, too. You rely on your team for so much: to provide cover, to pick you up if you’re knocked to the ground (on your own you have to mash buttons for a while to get back up, and you run the risk of bleeding out), to bring you back to the fight if you die, to activate objectives, and more. You also have to be responsible about your attacks because of friendly fire. One poorly tossed grenade and it could be lights out.

Helldivers features an extremely intuitive drop-in style multi-player system which makes it easy to find squads to join or to allow others to join you during your mission. I never had trouble finding people to team up with, but if you want to limit who can join you can set your party to friends only or private. If you have a microphone that’s by far the best way to communicate, but you also have a limited number of orders you can bark such as “Move!” and “Wait!”. I do wish there was a wider range of emotions you could express in the game, though. There were multiple instances where I ended up running missions with the same randomly paired teammates for hours and, after a while, felt a bond with them that I wasn’t able to express.

The premise of the game is that you’re fighting aliens across a particular galaxy, the galaxy itself is broken into sectors which each have their own set of missions. The missions take place on various planets which feature different types of terrain, such as desert, “space desert” which is basically desert tinted with a stereotypical alien palette such as red or purple, swampland, icy formations, and so on. I found the variety in the terrain types to be lacking and the map design repetitive, the same can be said for the enemy types. Each galaxy sector has a different predominant enemy type and the same handful of them seem to stick around in all the missions. There aren’t many interesting set pieces to behold, like ancient alien artifacts or structures, which would go a long way to making each planet appear unique. I also wish there was more variety in the player armor, since everyone pretty much looks the same as it is.

Despite the simple, repetitive nature of the enemy and level design, the graphics are pretty to look at and, more importantly, the framerate is rock solid. The soundtrack is always there to keep the pace feeling frantic in an action movie sequence kind of way, and the weapons effects sound great. I especially love the sound effect of a weapon when it’s nearly out of ammo; a hollow, metallic sound that rings through the PS4 controller speaker. It’s a highly effective and creative way to notify you that you need to reload.

Besides the joy of killing endless waves of aliens, Helldivers engages you in the game by way of upgrades and lore. You gain experience by completing missions which open up new weapons, stratagems, and perks. I haven’t talked about perks yet – these are an additional layer of customization which, on top of your weapon/stratagem loadout, can alter your abilities, such as giving you additional armor or reducing the cooldown time of your stratagems. You also accrue research points that can be used to upgrade your weapons and stratagems. You’ll gain levels represented by military style ranks which convey your skill and power level and give you access you more difficult mission. The lore is handled by an encyclopedia that is brimming with stuff to read, such as the history of the conflict Earth is involved in and information about the various alien races.

Helldivers has a lot going for it, it’s an exceptionally fun multi-player (specifically co-op) game that I’m shamelessly addicted to right now. The online experience is fluid and seamless, and it goes without saying that local co-op is a blast. And perhaps most importantly, the multi-player infrastructure is conducive to matching people up with minimal hassle, it’s really difficult for the experience to be dragged down by flaky teammates. The action is always moving forward and people can drop in and out with ease. My biggest concern is the game’s longevity, it doesn’t seem like there’s a huge amount of content and the content that I’ve seen so far is not that varied. Still, this is not a full-priced game and you’ll likely get dozens hours out of it. I just hope the experience opens up a bit more later on. 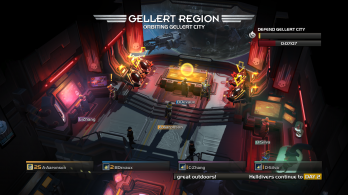 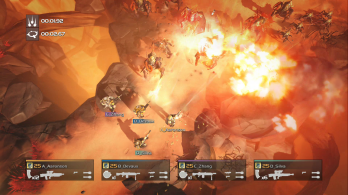 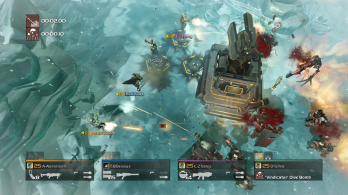 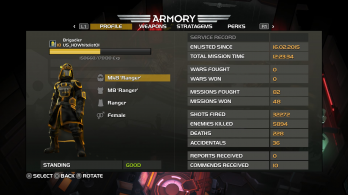 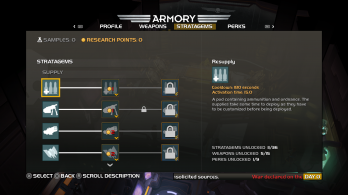 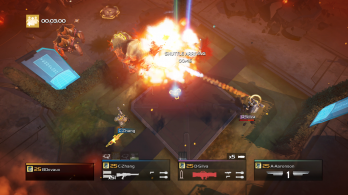 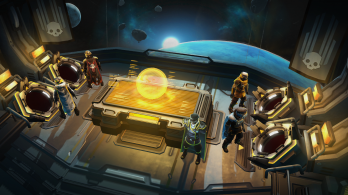 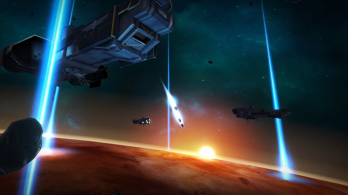 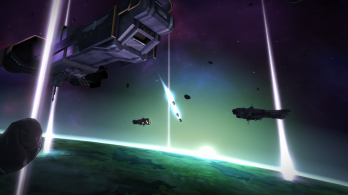 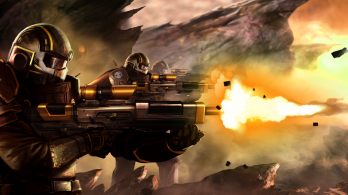 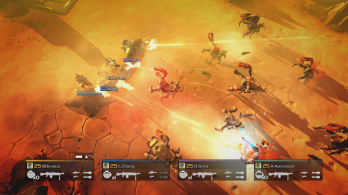 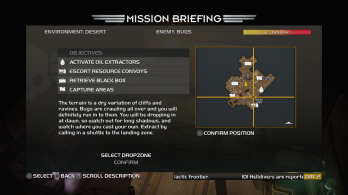 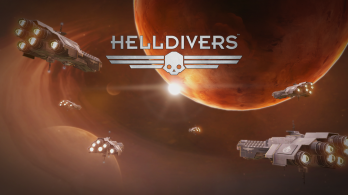 While the maps and enemies could be more varied and interesting, there's no denying that the gameplay is stellar, rewarding you for working closely with your teammates and punishing you otherwise. And best of all, the multi-player system powering the game works flawlessly, making it easy for you to find other people to tackle missions with. The deep upgrade system and customizable loadouts will go a long way towards keeping you engaged long after your first battle. Simply put, Helldivers is a wet dream if cooperative multiplayer games are your thing.