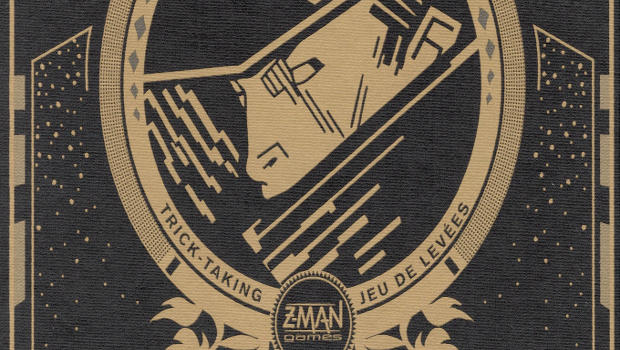 How much do you enjoy playing the card game Hearts? If the answer is “I’d rather chew off my own leg than play a round,” then save yourself a potential de-limbing and skip to a review on Gaming Trend of a less trauma-inducing game.

You can thank me later.

Black Spy takes the rules of Hearts and adds some spin and a spy theme. A fourth edition, revised in 2013 by Z-Man Games, is now available.

Fourth Mission for This Spy

Black Spy first appeared in 1981. Z-Man updated it as part of a revised series of small card games that so far consists of Black Spy and Parade (read the Parade review). The founder of Z-Man, Zev Shlasinger, has always had a passion for card games, and this reflects in the company’s continued presence in this portion of the gaming market.

The contents of Black Spy include:

Not sure why the game box and Z-Man website list different minimum suggested ages for the game. Regardless, a 10-year-old could play Black Spy straight from the rules, and any 8-year-old who has played a trick-taking card game will grasp it quickly. Of course, as with any age suggestion, YMMV.

Again, an odd discrepancy: The rulebook for the game lists a pencil as a component, while the website does not. The copy I received of Black Spy contained no pencil. Oversight? Who knows? I had the same issue with Parade.

That deck of 60 cards is where Black Spy diverges from a standard deck of cards used to play Hearts. Instead, players get five colored suits (red binoculars, blue briefcases, yellow bowties, green fedoras, and black crosshairs) in cards numbered 1-11. Conveniently, the game plays 3-6, and with a 60-card deck, the deal will never leave leftover cards.

The card faces depict a range of nefarious characters that look like they stepped out of a ’50s Cold War novel, with an art style similar to Norman Rockwell and The Saturday Evening Post. Artist Chris Quilliams also did the artwork for the previously mentioned Parade. But while the art in Parade seemed to fit, the Art Deco style of the cover and card backs in Black Spy makes one long for a continuation of that style into the card faces. Or the use of a Russian Constructivist style. The revised art just does not grab. I would have also liked a diversion from a typical-looking card and gone with art covering the whole card from edge to edge. Additionally, this theme would have looked fantastic on clear, plastic card stock in a design that made clever use of the card reverse artwork. As I see it, if you’re going to revamp an older card game and charge $20 for 60 cards, go big or go home.

Played Hearts? Then once you’ve absorbed the few differences in Black Spy, you can jump into playing.

In a smart design choice, the cards that add or subtract points are labeled with their point values.

Deal the cards to all players. Players select three cards and will pass those to another player.

The Red 1 (marked with a star) always leads. Players must follow the led suit if possible, but Black Spy adds that a player may also follow with a card of the same numerical rank, regardless of suit. If a card is led and the next player throws a card of the same rank or same suit+rank (such as with a Black Spy 7), the one thrown first takes priority. Highest rank card in the led suit takes the trick and any points.

When one player reaches the high score limit as determined for the number of players, the game ends, with lowest total scorer the winner.

As in Hearts, it’s possible for one player to gamble by attempting to take all 16 Black cards, which forces 60 points on all the other players. In what seems like a failure of imagination, no clever name (Hearts: “Shoot the Moon”) is given in Black Spy for this accomplishment.

With variations on the suits, card distribution, and playing numerical rank on a led card, Black Spy would appear initially to unfold with more strategy and subtlety than Hearts. Appearances are deceiving—unfortunately.

Our game group did not find the distinctions in points and the additional numbers of ways to score them made much difference between Black Spy’s play and Hearts’. If anything, despite the added ability to play a card of the same numerical rank rather than just the same suit, players who got stuck with an unwanted lead found it as hard or harder to dump the lead on someone else. This created more lopsided scores in the game, as one or two players took far more punishment, and the pain of points cards did not spread as nicely as one might assume. In short, Black Spy is a less forgiving game, even with the additional negative points Spy cards.

With more swing in scores, and more possible negative points, Black Spy should feel like a nastier—but more strategic and fun—version of Hearts. Except it doesn’t. Somehow, the distinctives of Black Spy don’t deliver more strategy. Or fun. If anything, the game simply feels more unforgiving, and no one in our game group appreciated the move into that territory without a compensatory increase in fun.

The scoop on this spook card game:

Components: The linen-finish cards are typical of a pack of decent-quality poker cards. As noted, the artwork is fine, if blander than it could have been—would have looked great in transparent, plastic cards with a continuation of the reverse side design (and would have better justified the cost). Kudos for suit iconography differences to aid colorblind players, the one feature the other series game, Parade, lacked.

Theme: A spy theme is always fun, but does the theme drive the game play? Not at all.

Instructions: The tri-fold instructions come in separate English and French versions, and they are perfectly fine for this simple game.

Value: At $19.99, Black Spy is much less of a value than its counterpart in this new series from Z-Man, Parade. It lacks enough distinctives to separate it from Hearts. If designer Alan Moon had added a couple more twists to the game, he might have made it harder to say no to Black Spy.

That Cyanide Capsule Is Calling

In short, buy a pack of playing cards for $3 and stick with Hearts. If you must play Black Spy, rig a couple cheap playing card decks together and go for it.

Mechanic(s): Trick-taking (or avoiding, in this case) card game

Weight: Light – “Something grandma could play”

Black Spy takes a stab at updating and improving the classic card game Hearts. While a decent production, if fails to deliver enough distinctions from its humble roots to warrant a $19.99 MSRP.