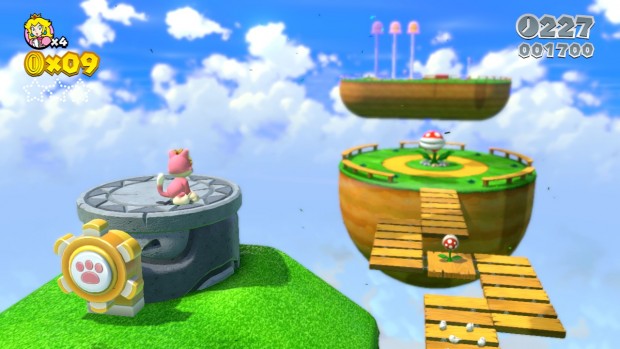 It’s a sad day when a Super Mario release is met with muted enthusiasm, but that’s been the trend regarding our favorite overall’d plumber. Releasing with the seeming regularity of a Call of Duty game, each new addition to Nintendo’s flagship franchise is technically and mechanically sound, but lately, it’s like the magic is gone, that Nintendo has essentially fracked the imagination and soul out of Super Mario.

Which is why I’m happy to report that Super Mario 3D World is the best Mario game in years.

Right from the first level, Super Mario 3D World is inventive, cheerful, and whimsical. You’re presented with a world map, similar to games like Super Mario World. In the first of a long list of surprises, you’re actually allowed to freely run around it, rather than stick to strictly set paths. These maps hide tons of little hidden secrets, enticing exploration before you even enter a single level. Once you do enter a level, you’ll be greeted by a similar graphic style found in the New Super Mario Bros. series of games. Everything is bright and colorful, though sterile, and the game runs at a constant 60 frames per second at 1080p — more than you can say about many of the next-gen games coming out now.

Most of the gameplay consists of tried-and-true Super Mario concepts. You’ll hop on Goombas and Koopa Troopas, collect coins to gain lives, eat Mushrooms to get big, and hop on a flagpole at the end of the level. Nintendo is the expert on platforming gameplay and controls, and Super Mario 3D world is no exception — running and jumping are tight, and each stage is packed with ideas.

Like the previous games in the series, Super Mario 3D World supports up to four different players. Rather than simply reskinning the same set of moves onto four different character models, however, each player has a unique move set, similar to Super Mario Bros. 2. Mario moves exactly like he does in all of his other games, but Luigi does his flutter kick, jumping higher and floatier (God help you if you get stuck with him). Peach hovers for a few seconds mid-jump before floating to the ground, and Toad is a veritable speed demon. These differences add a huge layer to the game, allowing players to pick the character that fits their play style. Plus, the added dimension it makes much, much less frustrating to play a level with four players, as it prevents players from jumping on each other (unless they’re total jerks).

Rounding out the typical list of power-ups like Mushrooms, Fire Flowers, and Tanooki suits is the brand new Cat suit. Grabbing a bell will turn Mario and friends into cats (complete with meowing sound effects — it’s weird). Cats have special tricks, like direct attack moves and the ability to climb walls. This simple addition allows developers to throw in lots of hidden items off the beaten path, with platforming challenges never seen before in a Mario game.

See-through pipes are another welcome addition to the standard Mario elements of play. Hopping into one of these will send you flying through the level like a character in Futurama, and at first it seems like a simple gimmick. After playing a couple levels that feature them extensively, you’ll learn that they’re anything but as you have to control your chosen character through branching paths, collecting coins and items while avoiding the baddies hidden inside. Some of the best moments of Super Mario 3D World include figuring out the precise timing to make your way through a particularly perilous set of piping.

Every level holds new tricks or toys to play with, and you’ll find it impossible to wipe a giant grin off your face as you Goomba-stomp through each level. And each element never gets old. For example, a couple levels use the GamePad’s touch screen to raise and lower platforms, as well as require you to blow in the mic to move platforms. This could have been annoying if it happened in every other level, but it only happens once or twice during the entire game. You’ll never know what new surprises await in the next stage, making this the most exciting Super Mario game in a long, long time.

Super Mario 3D World is a masterclass of game design, and the result of decades of iteration and improvement — which makes its overall brevity that much more painful. From the start menu to the credits, I completed the game in a short, lazy afternoon. Side levels and secret areas abound, and each level offers hidden stars and stamps, giving players countless reasons to revisit the Mushroom Kingdom. Still, when the main quest ends so quickly, you can’t help but feel deflated.

The overall lack of difficulty exacerbates its brief run-time. Lives and power-ups are plentiful, and it’s clear that Nintendo’s “provide everyone a chance to win” ethos shines just as bright here as it has throughout the last decade or so. Sure, some levels will challenge, especially with more players on screen, but while longtime Mario fans will have fun playing, they will breeze through its myriad trials.

On the eve of the next generation of consoles, it’s comforting to know Super Mario still has potential to excite and astound with some of the best gameplay found on the Wii U, or any platform. It may be short and easy, but Super Mario 3D World finds a place within the cacophony of this year’s whiz-bang shooters and next-gen tech demos. This is exactly what the Wii U needed.