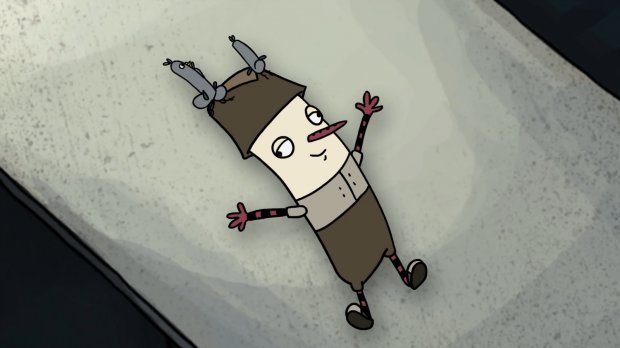 Okay, so here’s the thing: I don’t really like Point-and-Click adventure games. Maybe it’s because I never played Zork, or any of the classic Monkey Islands. Even the fascinating and beautiful Memoria couldn’t hold my interest for very long. Now, I’m not telling you all of this because I think you care about my personal preferences. I’m telling you all this so you will understand how strange it feels for me to type what comes next: The Inner World is a lovely little gem, and you should go play it as soon as you can.

[singlepic id=16696 w=320 h=240 float=left]It’s hard to pin down what exactly makes The Inner World so good. Is it the graphics? German developer Studio Fizbin advertise The Inner World as “Hand-Drawn Non-Steroscopic 2D.” The ad wasn’t lying–The Inner World has clearly been drawn and animated by a relatively small team on a small budget. Characters are little more than vaguely human-shaped blobs, and the few frames of motion gives movement a stiff, jerky look. One might be tempted to say the animation is bad if it wasn’t so charming. Nobody could be disappointed while watching an adorably thick pigeon attempt to eat by slamming its entire face into its meal. There are even animated cut-scenes–a nice treat if you can get past the boneless movement of the characters.

Is it the audio? No, sad to say it, but the audio in The Inner World isn’t really all that great. The soundtrack isn’t distractingly bad, but it mostly serves as filler noise. There were only a few different tracks, and you’ll end up hearing them at least two or three times throughout the course of The Inner World’s 5 hours. Voice acting isn’t particularly good, either. Characters have wildly different accents for no apparent reason–you’ll hear shades of British, French, and what I swear is Italian–even though all the different characters come from the same place. Whatever secret sauce brings The Inner World so high, it certainly isn’t the audio.[singlepic id=16692 w=320 h=240 float=right]

It must be the storyline, then? Well….yes and no, depending on how deep you want to read into The Inner World. At the surface level, The Inner World merely depicts the trials and tribulations of a flute-nosed simpleton named Robert as he attempts to retrieve a pendant from a pilfering pigeon named Peck. What makes it so interesting is the strange setting and stranger characters that inhabit it. The titular “inner world” is Asposia–a small nation sitting on the inside of a strange, spherical planet. The Aspsosians themselves don’t seem to be the brightest lot–even Robert can be a bit thick from time to time–but it’s hard not to feel for them when they talk about their fear of the monsters that occasionally turn them to stone. Robert’s father–a venerable old monk named Conroy–seems to have the answers, but players quickly learn he might not be as benevolent as Robert thinks he is.

Okay, so the story is good–but what about the gameplay? Your opinion on that will largely depend on how much you enjoy point ‘n click adventures. The Inner World is classic adventure fare: find objects in the world, combine them in strange ways, and use them to solve puzzles. If Guybrush Threepwood is your favorite cosplay, you’ll probably feel right at home in The Inner World. The rest of us will have to put up with some game-dev-logic (“I can’t pick that up fish–It’s too slippery!”) but the extensive tips will get you through some of the more obtuse puzzles.

[singlepic id=16695 w=320 h=240 float=left]If you’re trying to figure out what it is that makes The Inner World so satisfying, you’re really not going to be able to pick any one thing. The story, graphics, and gameplay are all okay, but it’s the sum of the parts that synthesizes The Inner World into the charming gem that it is.