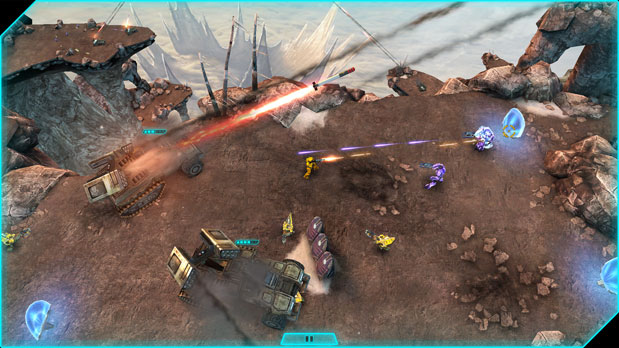 When Bungie first envisioned Halo, they started building a real-time strategy. Since they had created the popular Myth series and the RTS genre was popular at the time, their decision wasn’t surprising. Once the put a camera behind one of the soldiers and saw how much fun that was, Halo transitioned to a first person shooter. Eventually Ensemble Studios brought the strategic side of Halo with Halo Wars. Now 343 Studios adds the twin stick shooter genre to the Halo universe with Halo Spartan Assault.

Taking place between Halo 3 and 4, you play as two different Spartans not named Master Chief. Actually, Spartan Assault is a “battle simulation” that you control these two characters. While the story could have been filled out more by these side missions, the briefing rarely veers from the objectives.

Once getting into the game, you complete the straight-forward objectives. Some missions require you to kill all the enemies, others have you escort a vehicle, while another forces you to stand your ground until an evac can arrive. Standard fare for a shooter, and nothing surprising for the setting.

The scaled-down graphics can’t hide the Halo influences. The grunts and elites are recreated faithfully from the weapons to the voices. Banshees and other vehicles fly overhead while massive tanks fill the ground. Whether it is an ice world or green clearing, the details of the landscape show up crystal clear.

While the environment looks great, the barren landscape feels dead. The small number of enemies approaching you rarely creates a challenge. The short missions within the campaign of twenty-five stages won’t take long to complete either. Since Spartan Assault was originally designed for Windows 8 with tablets in mind, the shortness of these missions is understandable. However, the price of admission is hardly justified by the length of the content.

You earn a score in each mission where you can earn a bronze, silver, or gold star. To increase your score, a combo system is put in place. Killing multiple enemies within a certain number of seconds, killing multiple enemies without getting hit, and other streaks increase your score. Those who want to increase their score and their challenge can use the skulls. These multiply your score, and up to two of them can be equipped. However, they contain detrimental effects like removing your status bars or only increasing your health and shield by using melee attacks. You might want to use these on a second playthrough after completing the campaign since the score really doesn’t matter.

A short tutorial helps with the controls, but if you’ve ever played Halo you know them. From the triggers to fire and lob grenades to switching and picking up weapons with the face keys, moving from first person to twin stick overhead view transitions easily because of the same control scheme. I was surprised that this format worked so well.

I thought that Spartan Assault would be a great addition to the Halo universe while expanding the audience with a new genre. In the end the short campaign, lack of storyline, and ease of gameplay make this a tough sell. I enjoy dual stick shooters like this, so I did enjoy my time with the game. However, you might have to lower your expectations with your purchase.