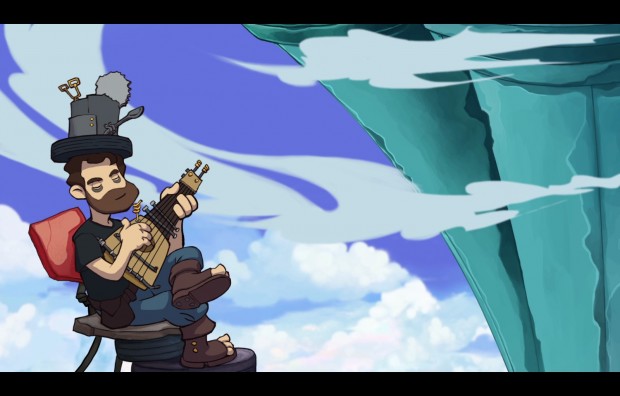 Daedalic Entertainment, a German developer based out of Hamburg, has been putting together some pretty serious (in terms of quality, not tone) adventure games since 2007 for their dedicated fan base. Their recent Night of the Rabbit garnered oodles of critical acclaim, while their Deponia trilogy has been racking up new converts to the genre since premiering in 2012. Given their status as a major player on the adventure gaming scene, it seems as though they’ve discovered a special formula that hearkens back to the Golden Age of adventuring. Goodbye Deponia, their latest release, has already been turning heads, and makes you wonder whether a second coming might not be at hand for these point-and-click puzzlers. Here’s how it all came out:

The first thing you’ll notice when you first play Goodbye Deponia is the artwork. One may argue that backdrops can make or break an adventure game, and the amount of care that the developers have taken in that regard becomes evident as soon as you load up the first level. Lovingly hand-painted panels comprise the visual world of Rufus and co., and the characters whom you’ll come across are no less interesting to look at, for that matter. The level of creativity at play here has resulted in some really far-out worlds that are a pleasure to explore: utopian wonderlands that tickle the mind’s fancy, spooky old hotels with some very bizarre inhabitants, or an Organon cruiser speeding along at maximum speed, threatening to send your sexy gal pal Goal flying into the stratosphere (unless you save her!).

This brings up another important point: each scene you come across in an adventure game should not only look nice, it should have some sense of liveliness to it. The player wants to explore, but there needs to be a certain level of intuition involved if the player is to have any chance of progressing further in the mystery. Most of the time, Goodbye Deponia’s logic puzzles turn out to be engaging and satisfying. Quick thinking and instinct will usually allow you to proceed on to the next chapter, without any of the maddening ‘pixel-hunting’ that often plagues an adventure game. Genre enthusiasts often attest to the fact that nothing ruins an adventure game like truly impossible puzzles, and Daedalic has done a good job of avoiding that here. Deponia’s inventory system only adds to the overall experience, allowing easy access for the combination and utilization of the various items you come across in your journey.

The story itself comprises another very important factor when considering the overall quality of the game, and Goodbye Deponia gets pretty crazy, alright; the game pays off your hard work with some great plot twists. As an added bonus, you’ll get to play some enjoyable mini-games, something you don’t necessarily find in every adventure game. The programmers obviously had a clear sense of what appeals its fans, and were able to create a gameplay experience that’s layered, complex, and innovative, while at the same time remaining true to adventure game classics, from which the developers evidently draw heavy influence.

The sound design for the game adds to the strange atmosphere, particularly the music, which includes a raucous ballad by a German folksy type that gets you in the right mood to start the adventure. All the right sound effects are in place, with nary a glitch to be found, and although the game started out with everything in German, the translators seem to have done a great job at preserving most of the cleverness in the English version. Players may find the sheer volume of dialogue somewhat irksome, proceeding at a snail’s pace unless you click through to hurry things up a bit. That being said, you’ll tend to miss out if you hurriedly skim over everything – despite the uneven pacing at times, it’s generally pretty funny.

Goodbye Deponia has some great things going for it: the gorgeous staged scenes set against hand-painted backdrops are Daedalic’s trademark, and they seem to have pulled it off again here. Tough yet satisfying logic puzzles and hilarious mini-games make it a pretty decent adventure to play through when you’re just looking to unwind and mull over some brain teasers for a while. The plot is skillfully written and brimming with a very peculiar brand of German creativity. The sound design is smooth as a Miles Davis solo, and the songs will have you chuckling at their weirdness more often than not. What’s not to love?