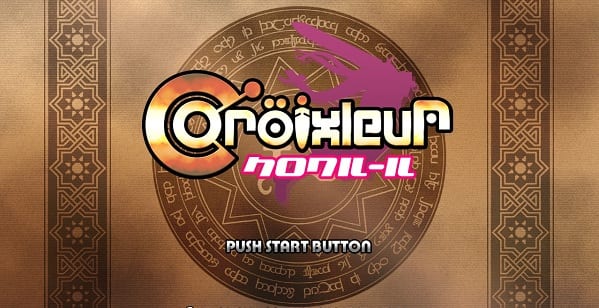 With the rise of Steam and the advent of the indie bundle, it’s probably safe to say that we live in a Golden Age of indie gaming. There have been indie games that came out in the past few years that I would recommend far and above the most frenetic AAA cover-based shooter. Croixleur, a decidedly Japanese hack ‘n slash title developed by souvenir circ.  seeks to enter that hallowed indie pantheon after the folks at Nyu Media localized it for North American audiences.

[singlepic id=10377 w=320 h=240 float=left]Well, the problems with this game come right when you start it up—the controls make it utterly impossible to simply navigate the title screen. The START button is mapped to the Escape key of all things, and I never did figure out what the other controls were. So after having to restart the game by force closing the program in the task manager (!) I opened the configuration tool and remapped the controls to my gamepad. I assume that the control scheme must have made some kind of sense on that side of the Pacific, but Nyu Media really should have remapped the controls. Basic QA testing would really have helped figure this problem out.

After starting the game up again I managed to get into the game, where I got my second disappointment. This game looks like a Nintendo DS or 3DS game. Background textures are a bit blurry, character models aren’t particularly fluid, and I noticed a lot of screen tearing (with no option to enable V-sync). It isn’t terrible, but it certainly isn’t particularly inspiring either. The lackluster technical graphics could have been overcome by a really distinctive art direction, but Croixleur lacks any sense of style. Audio is similarly bland. The sound design and music are proficient, but nobody will clamoring to buy the soundtrack.[singlepic id=10373 w=320 h=240 float=right]

Croixleur’s mediocre production values could be forgiven if the gameplay delivered some thrills, but this is where the game really falters. For a game billed as a “frenetic hack & slash arcade action game“ Croixleur is surprisingly dull. Each and every level plays the same: appear in a tiny circular arena, kill all the monsters, teleport to the next tiny arena, rinse, and repeat. The combat is pretty shallow, giving the player a three attack combo, and two special attacks. Croixleur has nothing approaching the intricate, intelligent combat of a game like DmC or Bayonetta. Killing enemies will net you experience, but there doesn’t seem to be any kind of progression—level 1 felt exactly the same as level 55. You’ll also gain access to new weapons as you play the game, but the differences between them are merely cosmetic

[singlepic id=10374 w=320 h=240 float=left]Croixleur ireally could have benefited from some variety. There are only two or three monster types, and the levels are literally palette swaps of one another. A boss fight will challenge you once in a while, but they’re not all that common, and aren’t that well designed anyways. The game includes a Story mode, though the plot is nothing to write home about, as well as score driven Time Attack and Endless modes.

Croixleur is a game with a singular lack of ambition. With boring graphics and audio, dull combat, and the problems with the control setup, I’d be hard pressed to recommend this to anybody. It’s true that the game is only $5.00, but there are a lot of better games you can spend that fiver on. Croixleur isn’t broken, but it is aggressively mediocre.