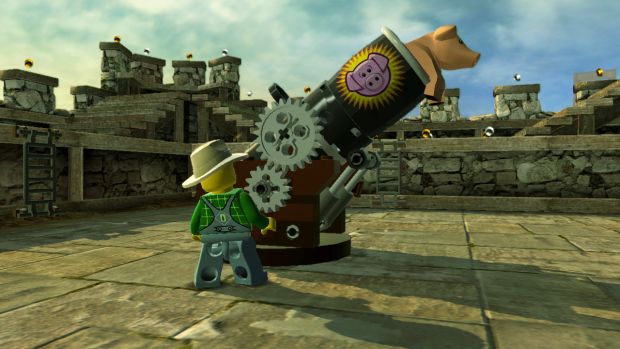 LEGO City Undercover carries the weight of the Wii U on its shoulders.

It’s an unfair position to be in. Other than the odd eShop game or random port here or there, Nintendo’s newest console hasn’t seen a worthy title since the day it released back in November. Four months is a long time to go without any new games – especially within a new console’s launch window – and ever since Ubisoft decided to delay releasing Rayman Legends, all eyes have been on Nintendo’s first Wii U game since launch.

So it comes with a huge sigh of relief that LEGO City Undercover more than steps up to the task, finally giving gamers one of the first real reasons to pick up a Wii U. Even better, we finally have an open-world, Grand Theft Auto-type game that players of all ages can enjoy.

[singlepic id=11099 w=320 h=240 float=left]TT Fusion, the studio responsible for handheld ports of the major LEGO franchise titles, has created not only their first unlicensed LEGO title (that is, one that doesn’t have a major Hollywood franchise or comic book license attached to it) but also one of the few original LEGO titles in the entire franchise. By focusing solely on original LEGO sets and characters, TT Fusion is given the entirety of pop culture to riff on, rather than being pigeonholed into the universe of whatever film series they’re borrowing.

The trademark wit and charm is in full effect here, as Chase McCain (doing his best Zapp Brannigan impression) is tasked with taking down recently escaped convict, Rex Fury. In doing so, he’ll have to go undercover, infiltrating the various illicit organizations, all while uncovering a plot bigger than he could have imagined. You’ll get constantly barraged with bad puns and gangster film and crime show references the entire time you’re playing – a Dirty Harry sound-alike wonders if he had six shots in his coffee or five, and a POV shot similar to a scene in Goodfellas introduces several important members of the Pappalardo family.

The entire thing feels like the home movies of a ten-year-old kid, who, after sneaking through his dad’s film collection, decided to make his own LEGO versions with a video camera. Yes, you’ll groan at the terrible wordplay and cheesy jokes, but it’s so confident about it that you can’t help but do so with a smile. The exact moment I was sold on the entire game was during the third mission, when the game does one of the cheekiest Shawshank Redemption parodies I’ve ever seen. You are tasked with investigating Rex Fury’s prison cell, and you meet up with Green (who does his best Morgan Freeman impression). To say much more would spoil the moment, but suffice to say, if you have a passing interest in great film, you’ll likely recognize one of several different parodies throughout, and it’s all legitimately funny.

[singlepic id=11100 w=320 h=240 float=right]Despite the change in setting, gameplay still remains largely unchanged from previous LEGO games. You’ll still go through various levels, breaking apart objects and beating up bad guys in order to find more studs (the game’s currency) and bricks (the game’s supplies), as well as uncover an entire smorgasbord of secrets and unlockables. Random LEGO blocks will appear as you destroy the scenery, letting you create different LEGO objects and vehicles, which you can then use to progress through the levels. Combat feels even easier this time around, as most enemies are dumb as bricks and can be taken out with a simple throw-and-handcuff combination, with larger foes requiring a quick button mash before you can toss them. The tried-and-true formula previous games have established remains here, yet LEGO City Undercover adds a few new ideas to the mix to make everything feel fresh again.

As an undercover agent, Chase will have access to several different costumes as he progresses through the game. Starting with his police uniform, along the way he’ll be able to turn into a burglar, a miner, even an astronaut. Each of these costumes has different attacks, as well as special abilities to traverse through the various levels – the miner can pick up dynamite from vending machines, while the farmer can use a chicken to hover for great distances, to name a few. To get through the levels, and unlock all the secrets, you’ll need to make full use of all of your costumes and abilities, and by the end it feels like it’s all a bit much – but the rate that the costumes are doled out ensures that you’ll never be overwhelmed by too many options.

The most important piece of gear that Chase ends up with is his communicator – the in-game representation of the Wii U Gamepad. It allows you to receive messages from the various characters you’ll encounter throughout the game, with both the video and audio coming from the controller itself. You’ll also use it as a sensor for listening in on conversations (try to listen to all of them – they’re funny) and even a camera for spying on your targets. Yes, it’s even a map – though Undercover makes great use of it. You’ll be able to keep track of the various landmarks and secrets in each area, as well as which Super Builds (various structures that you can create with the blocks you find) you’ve discovered, but haven’t built yet. It’s incredibly easy to swipe around the map, set waypoints by touching the appropriate icons, and instantly be off, all without pausing the game.

[singlepic id=11101 w=320 h=240 float=left]The biggest difference between LEGO City Undercover and the other LEGO games out there is also the main selling point of the game – there is a huge city to explore here. In between the more specialized levels you’ll be able to drive cars, boats, helicopters, and more in order to get from mission to mission and explore the numerous nooks and crannies on offer here. While nowhere near as large as a game like Grand Theft Auto, it feels far more packed with tons of little secrets and hidden areas. Free-run areas are clearly marked, and allow for scaling the various buildings, adding a vertical element heretofore unseen in a LEGO game. The sense of scale is tremendous – after completing the main story in about 15 hours, I’d only seen around 35% of the entire game. There are plenty of reasons to search LEGO City, scale its heights, and plumb its depths for many more hours after beating it.

Grand Theft Auto is actually the closest comparison to Lego City Undercover, as it emulates the classic mature franchise in many ways. You can grab random cars from people, run over streetlights and fire hydrants (and are actually rewarded for doing so), and typically find yourself with some form of random mischief to pursue. But it all feels very kid-friendly – pedestrians will almost always jump out of the way of your car (or get right back up if you do hit them), and other than a grapple and paint gun, there isn’t a single firearm in sight. It’s truly a feat that TT Fusion was able to take the open-world concepts that are typically the realm of incredibly mature games, and apply them to a world that children can enjoy. The fact that it does so without losing much in the process is even better.

It’s not perfect, though. The LEGO games aren’t really known for their polish, and this is no different. Controls are still as finicky as ever, and driving – something you’ll do for large stretches at a time – never feels as finely tuned as it should be. You’ll likely lose control of your vehicle several times in traveling between objectives, and it’s definitely the weakest part about LEGO City Undercover. The entire game is also incredibly easy – even mediocre players should be able to get through the main story with little to no problem. Granted, this is a kid’s game, and the majority of the difficulty comes from finding everything. Even so, combat is very basic, and all of the AI – from character to vehicular intelligence – acts about as well as you could expect from a combination of plastic blocks.

Less problematic, though no less frustrating, are the load times. Every time it loads up the each of the levels or the city proper, expect to wait at least 30 seconds — or much more. I decided to time the game as it loaded from a cutscene back into the city, and my final time was just over a full minute. It’s not game breaking by any means, but the game loads new areas fairly frequently, so it’s a bit frustrating to have to wait so long just to get back to the good stuff.

[singlepic id=11102 w=320 h=240 float=right]Four months is a long time to wait for a game – especially when you’ve just picked up a new console with nothing else to play – but the wait was worth it. Just like the all-ages appeal of LEGO bricks and sets, LEGO City Undercover effortlessly rises above its station, representing the culmination of every LEGO game that came before it. Even when it falters, the whole is far, far greater than the sum of its blocky parts. And just when you think it’s run out of ideas, there’s always another reason to keep building. It may not be the killer app the Wii U was hoping for, but it is, by far, the best reason to date for taking the plunge.