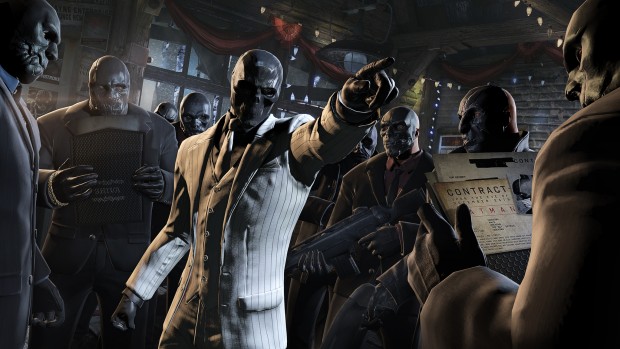 I was thirteen hours in when Batman: Arkham Origins froze on me for the third (or was it fourth?) time. I’ve been dealing with numerous bugs, freezes, and glitches: black screens that never loaded, enemies clipping into the floor or walls, scripting errors, frame rate dips, and even lockups plagued my time as the Caped Crusader.

But I was enjoying myself, in a way. Playing Batman: Arkham Origins was like going back to junk food after years of swearing it off. It was comfortable. I knew what to expect. Nothing was earth-shattering or groundbreaking, but I’ve played worse games. The tried-and-true Arkham gameplay loop was here, even if it was largely the same as before.

Then the screen froze as I was heading toward a side objective. Thinking nothing of it, I turned my game off, chalked it up to yet another bug, and turned it back on, ready to head back into Gotham City. I sat, staring at my television screen. I hit load. “Your save is corrupt. Please delete your file and start a new game.” I hit load again, thinking that, surely, it was mistaken. I was seeing things. There’s no way all of it could just disappear.

Nope. All my progress, gone. My day, completely wasted.

And I can’t think of a better metaphor for such a wasted opportunity.

Batman: Arkham Origins is a largely unnecessary prequel to Arkham Asylum and Arkham City, this time handled by WB Montreal as opposed to series mainstay Rocksteady. Taking place two years after Bruce Wayne officially dons the cowl, we see a younger, brasher Batman than in previous games. Batman is trying to cure the cancerous cesspit that is the seedy underbelly of Gotham – but no man is an island, and he’ll quickly realize that he’s going to need all the help he can get.

Black Mask has put a $50 million bounty on Batman’s head, and an entire rogue’s gallery of criminals is out for his blood. Deathstroke, Deadshot, Bane, and more are hoping to cash in; though it largely seems like the entire game could have been avoided if Bruce Wayne just decided to stay inside and watch Breaking Bad reruns on Netflix (his butler Alfred even says as much).

But this would not make for an interesting game (or maybe it would; your move, developers), and so Batman must take to the night sky to mete out his brand of vigilante justice wherever he can find it, and largely cause as much damage as he prevents. Yes, Batman is as much a monster as the villains he opposes. Yes, these bad guys will keep returning because Batman refuses to murder anyone. We’ve seen it all before; in the comics, in the movies, and especially in the last two games.

Because any sequel has to be even bigger and badder than the games before it, Arkham Origins has to throw as much at Batman as humanly possible. There are eight supervillains out for Batman’s bounty, and not a single one of them are given much more than a few minutes screen time, save for the Joker. This is supposed to be an origin story of Batman’s foes as much as it is Batman’s, and yet none of them is given any time to breathe. We never get to see a real superhero/supervillain relationship develop.

All of this leaves us with the weakest story in the Arkham trilogy. It tells us nothing we don’t already know, telegraphs all of its beats from a mile away, and actually retcons numerous details brought up from the first two games. Origins’ plot simply throws Batman into a cage with a bunch of monsters, and we get to see who makes it out alive (hint: it’s Batman).

If the gameplay fares a bit better, that’s largely because it was copy/pasted from Arkham City into Arkham Origins. In this installment, Batman stalks around Gotham City before the “Arkhaming.” It’s still a very dangerous place to raise a family, but it’s not quite the anarchist murder carnival it was in Arkham City. Batman can grapple to high ledges, and use the momentum to launch himself into the air and glide around, allowing for quick and easy traversal – which you’ll need to use to get around the fairly massive, yet mostly barren city.

Combat is the same juggling act between going on the offensive and timing counterattacks. All of the exact same gadgets are doled out to you when the game arbitrarily decides you need them. There are a ton of Riddler – I mean Enigma; it’s a prequel, remember? – puzzles lying around the city, waiting for Batman to solve. You’ll still spend an absurd amount of time using Batman’s “Detective Mode:” a blue-tinged x-ray vision that lets the Dark Knight see where his foes are at all times. So-called “predator rooms” are also back, and it’s here where all of the series’ mechanics converge. You’ll need to use all of Batman’s cunning to stalk your heavily armed foes from the shadows. There are few moments in games that provide the same thrill of expertly stringing up bad guys in the air one by one, and it still feels satisfying as ever.

There are a couple of new things to Arkham Origins that help it stand out a bit. The first is the the inclusion of fast travel points, which first need to be unlocked by solving a situational puzzle similar to the Enigma puzzles lying around. Second is the inclusion of enhanced investigations. Batman is universally considered the World’s Greatest Detective, yet he never really did a lot of detecting in previous games. Now, you’ll have to scan several crime scenes for clues, as well as scrub reconstructed crime footage to find additional leads. It’s never much more difficult than finding a big red arrow, but it’s just enough to make you feel like you’re actually doing something, and it’s nice that they happen more than once or twice.

All of the elements of a Batman game are here; and yet, I can’t shrug off the feeling that something’s off.

Maybe it’s the fact that this game is so by-the-numbers, that that odd feeling of familiarity, that sense having done all of this before, kept creeping into my mind.

Maybe it’s the fact that the pacing is terrible, that you’ll fight giant groups of enemies ad nauseum throughout your time in Gotham City.

Maybe it’s the fact that none of the main characters are voiced by the original cast. Troy Baker turns in a fantastic performance as The Joker and alleviates all of my fears of a Mark Hamill-less Batman game, but Kevin Conroy’s methodical and thoughtful treatment of Batman has been replaced by someone pulling off the best worst Christian Bale impression they can muster.

Maybe it’s the multiplayer that tries to shoehorn third-person cover-based mechanics into an engine that is clearly not designed for it. Like the story, it’s bland, uncompelling, and completely forgettable.

Maybe it’s the crippling technical problems that range from texture pop-in, to scripting errors, to game freezes, to corrupted save files.

Maybe it’s because it feels so much like it’s trying to be a good Batman game, but falls short in every conceivable way, from the uninspired level design, to the frustratingly dull boss fights.

Bugs, glitches, game freezes, and other technical issues mar what would have otherwise been a passable, if unsurprising and uninspired Batman game. Batman: Arkham Origins was clearly rushed to market, and created with the sole purpose of cashing in on an established franchise with little regard to how it would affect the overall quality of the series. In a single stroke, WB Montreal has ruined any desire I had in ever donning the cowl again. Unless future entries show marked improvement, I will not be tuning in, regardless of Bat Time or Bat Channel.