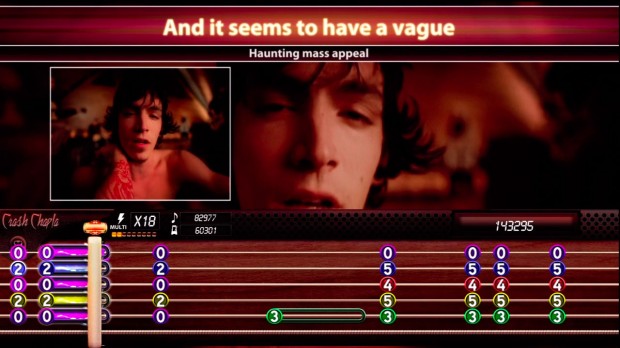 Put away your plastic toy guitars. After Rocksmith showed us that it could be done two years ago, rhythm games with real instruments are all the rage. The newest on the scene is BandFuse: Rock Legends, a game that seeks to connect with your inner wannabe-rockstar, whether you’re a guitarist, bassist, singer, or all of the above. Its direct competition — Rocksmith 2014 — may be a better learning tool, but BandFuse: Rock Legends holds its own, combining rocking out on your guitar of choice with the party-game element of karaoke.

As the title may suggest, BandFuse: Rock Legends makes no claim of musical diversity — this setlist is all rock and roll, all the time. Granted, the genre is rather diverse itself, so the musical selection here is not as one-note as you might expect. Metalheads will love to play along to Pantera’s “I’m Broken” or even Megadeth’s “Hangar 18,” but more dynamic tracks are present as well such as “Drive” from Incubus and the 80’s anthem, “Jessie’s Girl.” If you’ve ever wanted to pick up a guitar, you’re all but guaranteed to find something to your liking among the 55 songs included.

Popular songs may get you in the door, but they’ve gotta be fun to play if you’re going to keep the disc in your console. From a technical aspect, BandFuse: Rock Legends delivers. I didn’t have any note-detection issues with my Gibson SG connected using the included USB adapter. And in an impressive move, developer Realta Entertainment Group nipped the dreaded HDMI audio lag issue in the bud by including an adapter which allows a discreet audio-out connection straight from the console — it essentially eliminates the problem.

Experienced players rejoice — instead of emulating Guitar Hero’s note highway, the notes in BandFuse: Rock Legends arrive in standard tablature across the bottom of the screen. It’s not as visually impressive as other titles in the genre, but it’s far more useful. This single feature makes playing guitar in BandFuse: Rock Legends a much smoother and more comfortable experience than in similar titles, especially in the early goings. It might be slightly less friendly for those absolutely brand-new to the guitar, but learning to read tablature has real-world applications — that’s more than can be said for even the prettiest 3D note highway.

To counter the drab-looking scrolling guitar tab, you’re treated to a music video for the song that you’re playing, as well as a karaoke-style lyric display at the top of the screen. It makes for a great party game experience, especially if you have musically inclined friends ready to hop in for some multiplayer — though, as with most music video games, you’ll need to be ready to spend a good bit of money to purchase additional adapters and the microphone peripheral.

As a learning tool, though, this title is not as strong as its direct competitor, Rocksmith 2014. BandFuse: Rock Legends touts “lessons” courtesy of guitar gods such as Slash and Zakk Wylde, but the content is more accurately described as snippets of an interview spread across different subjects. Don’t get me wrong; listening to musings on guitar equipment, touring, and band member relationships can be fascinating coming from people who’ve seen it all. But any discussion of specific guitar technique tends to devolve into little more than guitar noodling, devoid of much useful advice for beginners.

The game’s most useful educational tools are its scale lessons. You’ll get a backing track for about four minutes to which you drill a scale. There’s nothing fun about drilling scales, but it’s a necessary evil if you’re serious about the instrument, and just having a simple backing track to play along to makes the experience bearable. However, progressing between the skill levels can be jarring. I found it quite useful to drill scales at eighth-note speeds, but even after I felt comfortable there, kicking it up directly to sixteenth-notes was far too challenging a jump. The issue with the difficulty curve extends to all areas of BandFuse: Rock Legends. Though there are five different skill levels, the jump between the “Expert” fourth level and the “Real” fifth level feels too steep in all cases.

The Quick Play mode feels best when you have a particular song in mind, but it’s seriously limited as a learning tool. While playing, your only option is to pause or restart altogether — no rewind feature or speed control. The learning aspect is reserved for the Lick Lab section, where the song can be customized to help learn specific parts. The menu navigation leaves much to be desired, but the tools are effective. Still, the introduction of the Riff Repeater in Rocksmith 2014 has made all other approaches seem antiquated, as it seamlessly allows for slipping into the learning tool whenever you reach a difficult part of a song.

A career mode is included with BandFuse: Rock Legends, but it does little to entertain short of forcing you to try new songs. Progression in this mode is achieved by playing short setlists (a la Guitar Hero), and accomplishing specific challenges, though the challenge system has its own annoyances. One such challenge tasked me with earning a five-star rating on a specific song. I had just received a five-star rating on that very song as it was included in a preceding setlist, but that didn’t count — I had to do it again anyway. Once you’ve mastered a song, you want to move on to the next, not drill that same song again. And as with the Quick Play mode, with the effective learning tools being relegated to the Lick Lab, there’s no good way to address problem areas as you arrive at them.

As an experienced player, I had the most fun with BandFuse: Rock Legends’ Quick Play mode, mostly due to the “a-ha” moments of learning a popular song note-for-note (so THAT’s how those chords in Drive are structured). And it’s difficult to express just how much easier it is to read tablature over a fancy note highway. However, after experiencing the ease and effectiveness of Rocksmith 2014’s Riff Repeater, it feels inconvenient to navigate the Lick Lab for similar functionality in BandFuse: Rock Legends. I like rocking out with this title, and I’m more inclined to bring friends along as well. But when my goal is to improve my guitar playing, I’ll be returning to Rocksmith 2014.

Thanks to the usage of guitar tablature, BandFuse: Rock Legends is a great way for experienced players to rock out to songs that they’ve always wanted to learn, and the multiplayer options make it a great party game. Unfortunately, the learning tools pale in comparison to the competition.