At a friendly, local, game store outside Osaka, Japan, board game night had one rule: First game fully set up on the big table got played.

Hisashi swore his Dominion—every expansion included—would hit that table first. Meanwhile, Hayashi would not rest until the group stopped talking about breaking out his Ticket to Ride Europe and at long last played the darned thing.

Each pedaling his bike furiously, Hisashi heading north and Hyayashi east, the two rounded the blind corner in front of the store and collided. Two games went flying, pieces mixing in a balletic dance of gamer horror.

Hishashi: “You got a railroad in my deckbuilding game!”

Hayashi: “You got a deckbuilder in my railroad game!”

And from the dust of that disaster sprang…

At Gen Con 2013, Alderac Entertainment Group (AEG) released a slightly modified version of the 2012 Japon Brands game Trains, by designer Hisashi Hayashi. The game achieved great word of mouth when first published but landed solely in the hands of a lucky few. AEG now delivers it to a wider audience.

Switched onto the Same Track

Ticket to Ride Europe is a board game of dominating rail lines between cities and building stations. Trains takes those elements and adds the card play of Dominion.

Since 2008, one of the hottest game mechanics has been deckbuilding. Dominion entered the marketplace, introduced deckbuilding, blew everyone’s minds, and generated a host of me-too games. Now, numerous deckbuilders exist in tabletop gaming, but few have matched the original.

Trains mimics Dominion so closely, anyone who has played the earlier game will pick up the newer one in seconds. Question is, will the new game on the block oust the old?

Under the Hood of a Bullet Train

In the deep box:

So, the components consist of cubes and hexagonal barrels, both wooden, and cards, plus a double-sided board with a hex-based map and a perimeter scoring track. Nothing fancy.

Except this: These are some of the highest-quality cards I’ve seen in a game. In fact, all game publishers need to examine the cards in Trains because AEG raised the bar. While not fully plastic, these cards have a plasticized surface and a rugged core. Though almost too thick to riffle shuffle, they nonetheless should hold up to the near-constant overhand shuffling required of a deckbuilder. Card wear remains the Achilles heel of deckbuilders, so many gamers sleeve their cards. The Trains cards look so robust, save the money ordinarily spent on 500+ sleeves and use it to buy the inevitable Trains expansions.

Which brings us to the excellent box and insert. AEG included not only divider cards for organizing the many card sets, but it also kept the two large card rows in the insert tight by throwing in foam spacers. The Trains insert might hold another 1,000 cards. With regard to card storage and organization, Trains 1, Dominion 0–though Trains benefits from the hindsight of seeing so many Dominion fans struggle with expansion management.

The rulebook is excellent too. Easy to understand, it features plenty of whitespace for an uncluttered, almost “tranquil” look sure to ease the rules fears of nongamers.

Look at the Choo-Choo! (or Deckbuilding 101)

The gist of all deckbuilders has a player using existing cards to add/”buy” cards from a set of others, building a concentrated deck of increasingly powerful cards to reach a victory condition.

Dominion has three phases in a player turn: one Action, one Buy, and Cleanup (ABC). The player deals five cards from his 10-card starting deck into his hand. He can play one Action if he has an Action card. That Action may generate further Actions that may be played. If the player has enough in-hand Coinage cards, the player can Buy a card from one of the 10 sets offered, each set containing all of one card with an additional Action, Buy, Coinage, or Victory Points, or a combination. Cleanup throws all the player’s cards bought, gained, or used in that turn into his discard pile. When the player runs through all the cards in his deck, the discard pile is shuffled to become his next deck and five more cards are dealt to form a new hand. In Dominion, chaining cards that grant additional Actions and Buys might have a player drawing and playing as many as 20 cards or more in one turn. The trick is in the order of the cards played and is part of the strategy of Dominion mastered by its best players. 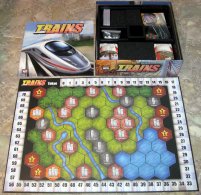 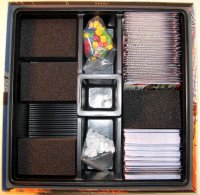 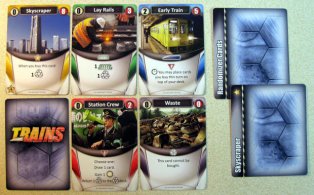 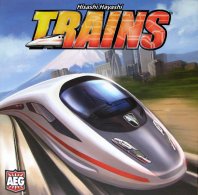 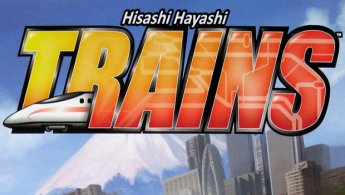 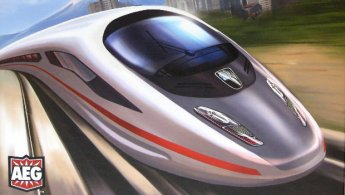 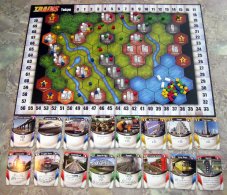 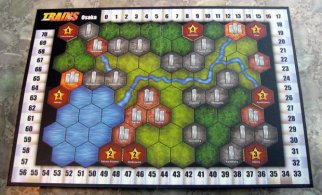 A Loco of a Different Color

The cards in Trains allow players to lay rails, build stations, manage train/money cards, and much more. Beyond the hex-map board, the notable difference between Trains and Dominion is the simplification of the ABC idea. In Trains, a player can play as many Actions as are in hand, so long as their Action conditions are playable. The same extends to Buys. Unlike Dominion, a player does not need special cards to grant additional Buys. Instead, Buy as many cards as money in hand allows. In this, Trains eliminates Dominion’s mental accounting pain of how many Actions or Buys a player has accumulated for a turn, making for smoother play.

Eight standard card sets plus eight others chosen through randomizer cards form the starting card choices for Trains. Each player gets seven Normal Train cards (worth one money each), two Lay Rails, and one Station Expansion. Each card has a cost to Buy (upper right corner) and a monetary value to serve as currency in the game (upper left corner). Some cards may have Action text (bottom half center). A few cards have Victory Point values (bottom left corner). Green cards let you build, red are actions, blue train cards serve as money for a Buy, and yellow give Victory Points. Some cards may be a single color but have crossover effects.

Each player lays one initial starting rail line token on an eligible spot on the map. To expand off that line, play a Lay Rails card and gain a Waste card. Most everything built in the game generates Waste, which does nothing but clog hand space and keep better cards out. Some cards remove Waste, and a player can pass a turn and use it to dump all in-hand Waste. The board contains fields, rivers, mountains, station cities, and special starred cities that score Victory Points. The station cities have one to three station markers, which dictate how many station tokens maximum may be placed on them. Fields cost nothing to lay rails, rivers cost one, and mountains two (though cards may modify costs). The number of station markers and the Victory Point values of starred cities require that amount of payment. To lay rails in a hex containing an opponent’s rails token, a player must add one additional cost for each existing rail token. For instance, a city with two station markers and two other players’ rails tokens would cost four, paid by the monetary payout value of that hand’s cards.

Are We There Yet?

The game ends when

Riding the Rails of Trains

I played the game with four players and with two, covering both the Osaka and Tokyo sides of the board. The four-player game demanded wise control of areas. Crowding four players onto the map often meant paying more for a hex, because a single hex might contain more than one player’s rail tokens. The two-player game, with more space to maneuver, became a race to score points and force the end game quickly. Two different play emphases, but each satisfying.

Deckbuilding is an alien concept for casual gamers who have not played Dominion or its many deckbuilding offspring, which means a longer initial play. Once learned, Trains is a brisk game, and Dominion fans should tear through it even faster, since Trains doesn’t appear to have as many hyper-chaining opportunities.

That noted, the presence of a board and how to play it will throw off a player who tries to bring Dominion strategies to Trains. Money is not as critical in Trains. It’s harder to keep a deck small and concentrated too. Players can’t always worry about buying better cards but must get something on the board or else find it more costly to move into already occupied areas. And what’s on the board in Trains will likely score more points than cards will.

So, which game reigns supreme in this deckbuilding face-off? Trains is simpler to play than Dominion but counters with the board elements of Ticket to Ride Europe. Dominion lacks the area control and route-laying of Trains, but may counter with its more complex Action, Buy, Cleanup system, which makes for deeper deckbuilding strategy.

Like Dominion, Trains offers almost limitless expandability as new cards become available. But the new guy has one up on the old master, because Trains also promises additional map boards, some of which were already given away as promos.

In the end, players new to deckbuilding may do better with Trains, while advanced gamers who prefer more complex hand management might be better served by Dominion. Still, if you haven’t already invested a fortune in Dominion base games and expansions, Trains is the game for you.

Trains takes the basic play of the award-winning Dominion, streamlines it, adds area control and route-building via a board, and delivers THE best family-oriented deckbuilding game. With limitless expansion options both in cards and map boards, it's the basis of a solid gaming system.