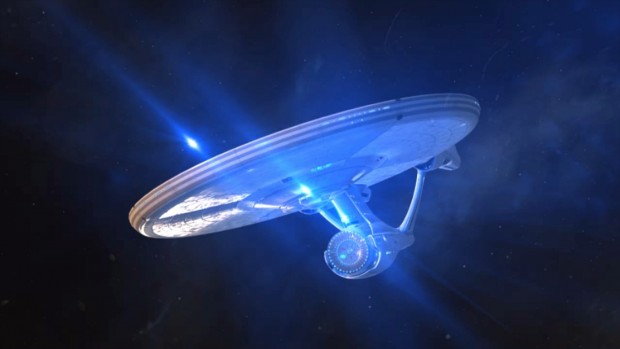 When I saw the JJ Abrams Star Trek movie, I walked out with mixed emotions. I enjoyed it, but I kept on saying to myself (*spoiler alert*), “Vulcan isn’t the planet that gets blown up, Romulus is. This isn’t REAL Star Trek.” Then I took a deep breath, and realized that it’s only a movie, and that it was a way to create new stories with familiar characters. When I saw Star Trek: The Video Game at E3, I had similar feelings. It had Kirk and Spock, and it looked like it could be a lot of fun, but there were some issues that needed to be dealt with. However, since it was a work in progress I was willing to give it the benefit of the doubt. Now that it has been released, I took a fresh look at it to see if those issues were resolved.

Star Trek: The Video Game takes place shortly after the 2009 Star Trek movie. A Vulcan science space station has been damaged and you need to save the crew. In the process you find out that the Gorn have attacked New Vulcan. The Enterprise crew gets caught up in the conflict and starts to investigate. In the process you’ll face the Gorn across ships, using your phaser as well as other Starfleet and Gorn weapons. Be careful with your phaser though, as the trigger is used for the kill shot, while the bumper is used to stun. Since you get commendations for not killing enemies in some missions, a slip of the finger can be the difference between being Captain and Admiral (not really, but there’s a reason why Kirk wanted to be demoted to Captain).

[singlepic id=12201 w=320 h=240 float=left]While the story itself isn’t original (the new bad evil alien race have stolen a superweapon and are now fighting against our heroes), I do like the inclusion of the Gorn. Their reptilian roots are shown in full force as they run forward with their heads sticking forward from their hunchback, mucus connecting upper and lower lip as they scream in battle. The original Star Trek created a memorable scene with a man in a rubber green suit, and it’s nice to see the Gorn in action again with an updated look.

Since you are a member of Starfleet, you have to ask questions first and shoot later. You’ll also be taking out the Tricorder and using it to scan your area, finding where enemies are, and what your current objective is. You can scan objects and get more information about them, just like you did when you played Metroid Prime. Your Tricorder also shows where your objectives are located, so you don’t have to worry about being lost. It also has the ability to hack into electronic panels to open doors or get electronic current going through them. That goes for alien technology too, kind of like using a Mac to hack into alien technology to upload a virus in Independence Day.

If all of this sounds exciting, well, it’s not. It wouldn’t be so bad if the AI was decent. The enemies generally stand around in one area, and sometimes they forget to shoot their weapons. The fact that your partner has the same kinds of brain farts makes the game more difficult. You can tell your partner where to go, but if you need to be revived hope you are close to him and he isn’t down already. Sometimes your partner can get stuck in one place during battle, making him useless.

If you have seen the screenshots, they probably look pretty good from a distance. The bridge of the Enterprise looks fantastic, really capturing the new look.  The faces of the main characters in the game look good, at least when they aren’t moving.  When you get close, the textures of the clothing and the skin of the Gorn are blurry.  The environments are either cold sterile hallways from a space station or ship, or they are brown barren wastelands that we’ve encountered in other games.  You’d think that there would be a little more variety in the look of Class-M planets.  When you see a character talk, the lip syncing doesn’t match up.  It’s not over exaggerated like a bad Kung fu overdub, it’s off enough to make the sensors in your brain go to yellow alert.

[singlepic id=12180 w=320 h=240 float=right]The animations of the characters aren’t smooth.  At the best they look slightly off, with an occasional frame of animation missing.  At the worst, everyone is doing a terrible version of the Harlem shake.  Sometimes there are issues with clipping, like Kirk’s phaser going through the ground he is lying on at the beginning of a cutscene.  Once I was so close to Spock that I could see that his head was empty, just like the episode “Spock’s Brain.”  A stunned Vulcan moved sixty degrees on the ground without the assistance of anyone else.  I once even saw a body disappear into thin air without the assistance of a teleporter.

The controls for the game don’t help the situation.  It employs a cover system, which is popular to do in third-person shooters.  Occasionally it works when it shows you how to move from one area to another with the press of a button.  Most of the time though, the cover system screws up your movement.  If you want to move out of cover, you need to pull away from the wall instead of moving to the hallway you want to go.  Sometimes you get stuck and you can’t away from the wall.  In the end it can cause you to be Gorn food.

The soundtrack is pure Star Trek.  The score gets more intense during combat, but settles down during slower interludes.  The sound effects are authentic, from the phasers to the warp drives.  The cast of the movie shows up to reprise their characters virtually.  Unfortunately it appears they have a harder time acting in a sound booth than they do in front of a green screen.  While Chris Pine and Zachary Quinto have some inflection in their voices, it lacks passion.  At least they are better than Zoe Saldana.  She speaks her lines with the same passion of a purebred Vulcan.  An odd bug occurred throughout the game as well, where you would hear Spock say, “No,” after a cutscene was played.

[singlepic id=12175 w=320 h=240 float=left]You are able to play as either Spock or Kirk, but there really isn’t much difference between the two.  Kirk is more offense, while Spock can handle the Tricorder and the science better.  You can play with a friend online, but the experience doesn’t change much.  Doing things together like prying open a door or boosting each other into a ventilation shaft require both of you to push a button, instead of just yourself.

An effort is given to break up the gameplay so that you aren’t constantly running, scanning, and gunning.  Hacking a system or reconnecting power requires completion of a mini-game.  These games are so simple that they get tedious if you aren’t being shot at.  Ship battles require you to aim the phasers and fire the proton torpedoes while managing shields.  Other activities require some coordination, but it’s more annoyance than interesting gameplay.

We’ve seen the Star Trek license used effectively in games.  Playing this game harkened me back to the days of 25th Anniversary and Judgement Rites.  Even the Elite Force games were good shooters that expanded the universe in a believable way.  Star Trek: The Video Game goes into the annals of gaming with other Star Trek titles like Klingon Honor Guard.  It’s too bad that this game wasn’t better developed and given more time to polish.  Instead of a fine dish of Klingon gagh, we end up with poorly sung Klingon opera.