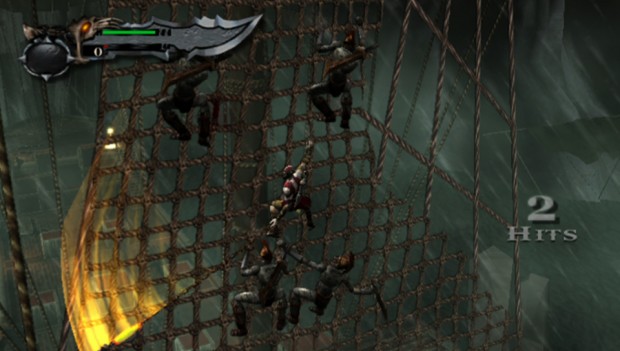 I remember God of War being dark, but I don’t remember it being this dark.

Sony released an HD compilation containing the first two God of War games a few years ago. It took the two classic PlayStation 2 titles and prettied them up with better textures and a higher resolution, making it one of the best ways to experience its tale of revenge set amidst the pantheon of Greek gods and goddesses. Sanzaru Games (the team responsible for the latest Sly Cooper game) have attempted to transport this series to the Vita, and while it’s still the quintessential male power fantasy, everything feels like its had a layer of Vaseline applied over it.

If you’ve never played it before, God of War tells the story of Kratos, a Spartan who defied the gods and set out on a quest for retribution against those who pulled his puppet strings for far too long. On his journey, he’ll whip his Blades of Chaos around and sling magic, pulling off massive combo attacks against the copious demons, banshees, medusa (Is it medusas? I can never remember.) and other creatures – like some super violent, interactive version of Clash of the Titans. Combat, puzzle solving, those big set pieces that still look impressive even today – all of the things that made God of War such an instant classic (and some of the things that made it infamous – awkward threesome sequences, I’m looking at you) have been brought over intact.

In order to fit not one, but two games onto a four-gigabyte footprint, certain concessions needed to be made. Those smooth textures and high resolution from the PS3 version? Gone. In its place is a muted, muddied, mess of reds and blacks. Everything just feels darker, like half of the lights have been turned off. Sounds and cutscenes have been highly compressed, as if the Vita’s been submerged underwater. And grabbing objects, opening treasure chests, and activating save points are all relegated to the rear touch pad – it’s as awkward as it sounds.

Even the user interface looks terrible – text looks weirdly squished, and the menu screen in God of War II has some serious framerate issues. Luckily, the rest of the game is fairly stable, though it can get a little choppy if there’s too much going on screen.

It’s just sad, really – we’ve seen some amazing-looking games on the Vita, like Killzone Mercenary, Uncharted: Golden Abyss, and Gravity Rush. We’ve even gotten some great ports with Persona 4 Golden and Final Fantasy X. If the Vita is capable of so much, why does this collection seem so lazy?

While the Vita port is mechanically sound, its disappointingly low resolution and awkward use of the rear touch screen is appalling. Yeah, you can play God of War on the go now – but you probably shouldn’t.