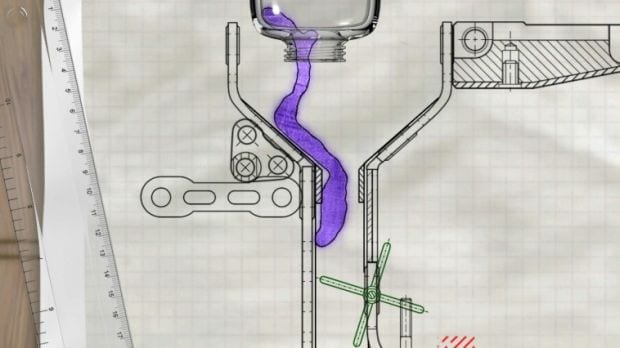 You’re just a puddle of viscous goo, minding your own business, when suddenly some dude grabs a cup of you and takes a drink. What do you do? Give up? Maybe lesser puddles would; but no, you keep trucking on, through the body, into sewers, and eventually into space.

This is only a brief fraction of the journey you’ll take as a pile of slime in the Wii U liquid physics puzzler, Puddle.

Moving your puddle around is simple to understand – merely press either shoulder button to tilt the world one direction or another, and your puddle of liquid will slide down along with it. It sounds easy, but where the game gets tricky is in how Puddle requires you to slide these liquids from point A to point B.

[singlepic id=10564 w=320 h=240 float=left]You’ll start off as a simple coffee spill, sliding around, using gravity and inertia to force yourself up and over ledges, down slides, and across ramps. As you progress, you’ll mix with other chemicals, eventually becoming weed killer, hydrocarbon, or even the water inside of a snow globe. Each level requires deft maneuvering, and each liquid type handles in vastly different ways. You’ll need to be careful when sending your puddle through each level, especially when the liquid you’re controlling is highly explosive.

[singlepic id=10565 w=320 h=240 float=right]And you’ll need them once you start hitting the later levels, as the game gets progressively more difficult. Most of the levels boil down to simple trial and error – try once, fail, get a little further, fail again, repeat until you’ve beaten the level. Some of the later levels are so infuriating though (pretty much anything in zero-gravity), that you’ll be glad you have the ability to skip levels. It’s usually never a problem of controls, but rather just trying to keep all of the liquid together, while dealing with some absolutely crazy level design.

Puddle is relatively brief and can be tackled within a lazy afternoon or two. There’s not much to the game once you’ve gotten through it – other than going back through to unlock in-game achievements and trying to get gold on each of the levels – but it’s fun while it lasts. It won’t set the world on fire, and it can be crushingly difficult at times, but it’s got a ton of nifty ideas and wrings every single drop out of them – and in that, Puddle greatly succeeds.

Who knew a pile of goo could cause so much trouble?