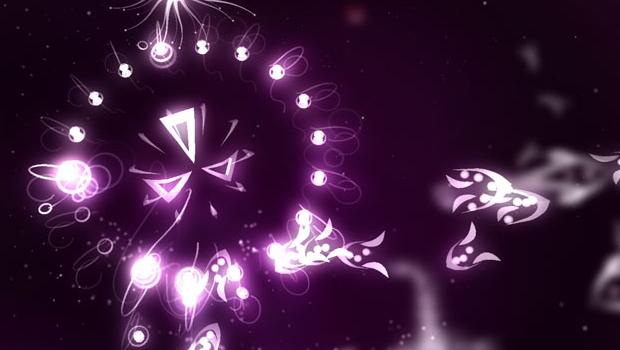 The original release of flOw was a simplistic experiment that showed that the PS3 had support for the artsy and indie community.  That support continued, with releases of games like Flower and Noby Noby Boy. Now, a new generation of gamers can experience flOw’s minimalist charms on the Playstation 4.

flOw is a simplistically beautiful experience.  Every piece of it is as basic as possible, and your only form of instruction throughout the game is a single screen which tells you the controls at the start.  You’re dropped in a world completely foreign to you made up of curving lines, and you’re forced to explore the watery below of flOw and find your own wonder.

The game is made up of seemingly endless levels of vertical depth.  The goal is to simply grow by eating other organisms in the pool, and then progressing to the next level by consuming a circular amoeba with a red dot in it.  The gameplay is addictive; I found myself constantly diving deeper to see what was next.

As you chomp up increasingly larger enemies, which become more intimidating the deeper you delve, you’ll eventually find a strange power-up which morphs your creature into the next stage of evolution.  You start off as a worm-like being with the power to boost and catch up to prey, but the other six forms have greatly varying special maneuvers, including a spin attack and poison.  You grow slightly each time you eat an organism, changing and becoming larger and more complex.  As you grow, you gain more orbs which act as hit points, but you are also more susceptible to attacks from enemies due to your bloated form.

flOw utilizes SixAxis motion controls which are completely functional, but the fact that there seems to be no option to switch to analog is a bit annoying since I quickly grow tired of motion controls.  The novelty and implementation are fun for a while, but I grow sick of it after about 20 minutes of tilting the controller back and forth.

There isn’t really much challenge in flOw, and I never once died or even felt the danger of dying.  Combat doesn’t pose much of a threat, and there isn’t much to the game other than going back after unlocking all the evolutions unless you want to go after some of the more difficult PSN trophies.

flOw’s THX-certified sound and unique visuals were a large part of what carried me through my playthrough.  When it came out back in 2007, there were almost no games that looked or sounded anything like it on any console, and it still holds firm in that position.

If you’re looking for a simplistic zen-like experience in a game, look no further than flOw. Simple controls and the itch to explore will keep you entertained for hours, and with the game supporting Cross-Buy play, allowing you to play it on PS3, PS4, and Vita, flOw is definitely worth having in your library.