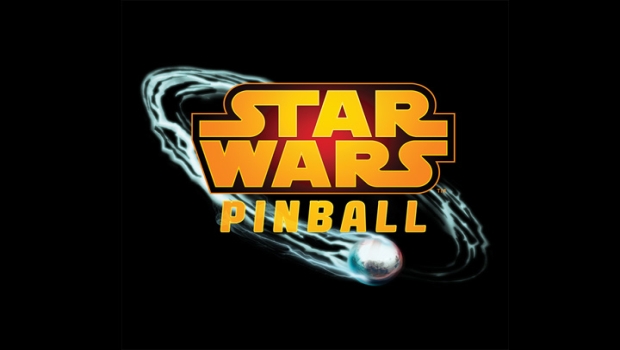 I had just finished watching a documentary on Netflix called “Special When Lit” that talked about the unfortunate demise of the pinball industry when my code for Star Wars Pinball arrived.  While the coin-operated medium is becoming far more rare these days (they were also banned for a while!  Seriously, go watch that documentary), the pinball world is alive and well thanks to one company in particular – Zen Studios.  We’ve run reviews on several of their tables in the past, but if there is one particular crossover that everyone was waiting for, it is the Star Wars franchise.  Let’s channel our inner Pinball Wizard and find out if Star Wars Pinball is more IV, V, and VI, or if it manages to Jar Jar it’s way to the bottom of the franchise.

For the review I chose the PlayStation 3 version as the crossover to the Vita was obvious – pinball on the go is a no-brainer.  After a short sub-200mb download, I added three tables to my ever-expanding list of Zen Pinball tables.  The three are entitled Star Wars: Episode V, Star Wars: The Clone Wars, and Star Wars: Boba Fett – obvious titular references to the movie, show, and character by the same name.

[singlepic id=11013 w=320 h=240 float=left]The Zen Pinball 2 platform serves as the base for every table Zen releases, so all three of these tables have the same base set of features as previous tables like The Avengers.  That means scoreboards (both local and global), local hotseat for up to 4 players (pass and play), 8 different camera angles that you can switch on the fly, 3D support, fully-adjustable controls, and the ability to tweak the tables to turn off things like score pop-ups, slow motion (rarely used), sound levels (though voice adjusting is not an option), and screen position.

Each of the three tables are vastly different.  Empire feels like a longer table with a lot more opportunities for minigames and frequent multiball triggers.  Boba Fett has a little less going on in the center of the table, but it is a far faster game.  Clone Wars feels like a balance of the two, and I found it probably the easiest to trigger the special minigames.  Depending on what you’d like to do you’ll find it easy to choose between the three.  Personally, I spent the bulk of my play time with Empire.

Each of the tables start with a table flyby.   Empire stars with a closeup of Vader, Clone Wars gives us a movie-intro text scroll complete with voiceover, and Boba Fett has the bounty hunter flying high above the table.  The artwork on all three is pretty solid, though Leia does look a little bit like Daniel Tosh from Tosh.0, but maybe that’s just my opinion.  The Clone Wars table is bright and colorful, using more soft colors like we saw in the Cartoon Network show by the same name.  Boba Fett is based on the character’s clumsy demise, so it features the Sarlacc pit and all of the brown colors that go with it.[singlepic id=11008 w=320 h=240 float=right]

Sound effects are lifted directly from the movie scenes, so authenticity is a lock.  Getting the ball back in play after an early-game loss with the classic Storm Trooper phrase “Move along…” is cool to hear as well.  All of the voice work in the game is done with sound-alikes, and most of them do a decent job.  Surprisingly, Vader and Han come up a little short, but it could just be that we have those voices so well associated with the iconic actors involved that it’s hard to hear any deviation.  The second table, Clone Wars, features Yoda….a lot.  He comments about every 2 seconds (sometimes less) and by the time you reach your first million points you are reaching for the mute button.  It’d be nice if Zen could patch Yoda down a little bit so we can enjoy an otherwise solid table.

Each table features at least 5 scenes from the movie or show, complete with little interactions like dodging asteroids as a Tie Fighter orbits the area, talking to the gatekeeper droid from Jabba’s Palace, and dispatching bounties as Boba Fett.  What’s awesome is that I’m completely underselling these moments.  In one sequence you fend off laser blasts from an Imperial Trooper only to have to battle an AT-AT as it lumbers across the table, and in another you’ll face off against Savage Oppress, Darth Maul’s younger brother.  Tangling with the various characters from the Star Wars universe has rarely been as fulfilling.

The Vita Connection
Crossplay is nothing new to the Vita but to say that it is underutilized is an understatement. While you won’t be saving RPG character levels or shuttling level status across platforms, it is great that Zen Studios has allowed us to take our pinball obsession on the go. Using the Cross-Buy option we’ve seen with titles such as with the most recent Sly Cooper title and the upcoming MLB 13: The Show, buying the game on the PS3 entitles you to play it on your Vita as well. All of the tables sport the same features as they do on their larger console counterparts, but there was one hitch – Boba Fett. It may be my old eyes, but that table is very quick, and the small screen on the Vita makes it that much faster. I found myself fiddling with the camera options a bit more than I did on the PS3 as a result. It’s certainly not a deal breaker by any means, but it is a consequence of the platform. The low low price of FREE makes it totally worth it though.

[singlepic id=11003 w=320 h=240 float=left]Most of the fun in playing pinball is figuring out how to unlock everything and trigger all of the cool table features.  You are welcome to do that on your own, but if you find yourself unable to trigger the cool stuff (like the AT-AT I mentioned before, or even a slick fight with Vader that is just too cool to spoil) you can always check out the Table Guide.  Each table will walk you through each of the sections on how to reach these signature moments but you’ve got to use your skills to reach them.

The greatest compliment I can pay this game is that shortly after playing it you’ll find an overwhelming urge to watch six movies back to back (okay, five – nobody wants to see Episode 1 again).  Hopefully when Zen gets to the next set of tables (they are making 10 of them!), Disney/Lucas lets them use the real voice work as well.  In the meantime, I can easily say that Star Wars Pinball is a must buy for Pinball Wizards, crazy old wizards, and even us pinhead mortals. 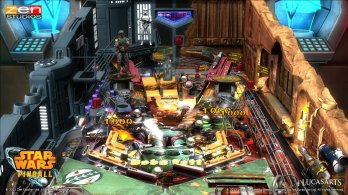 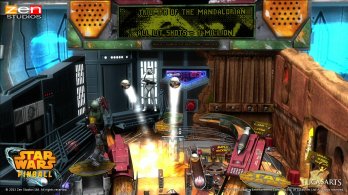 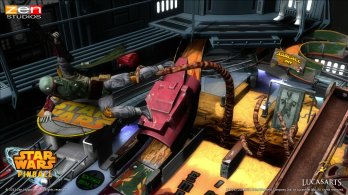 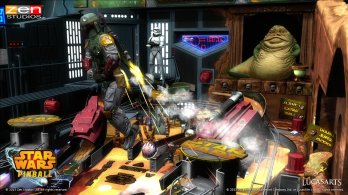 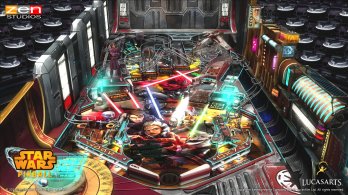 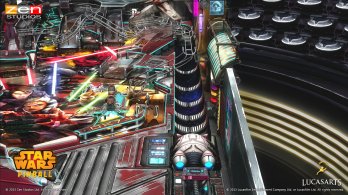 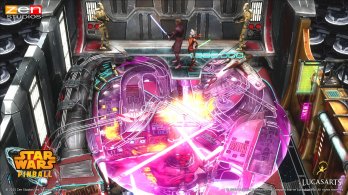 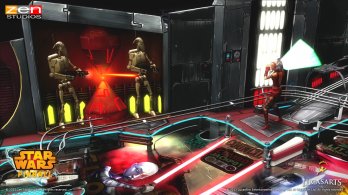 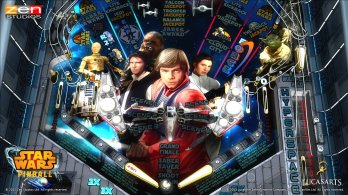 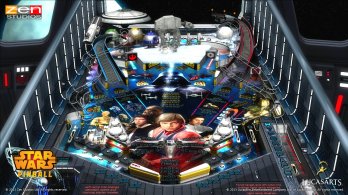 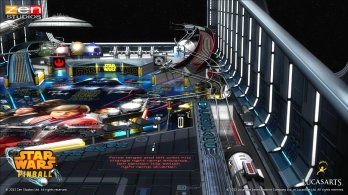 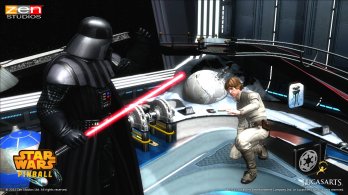