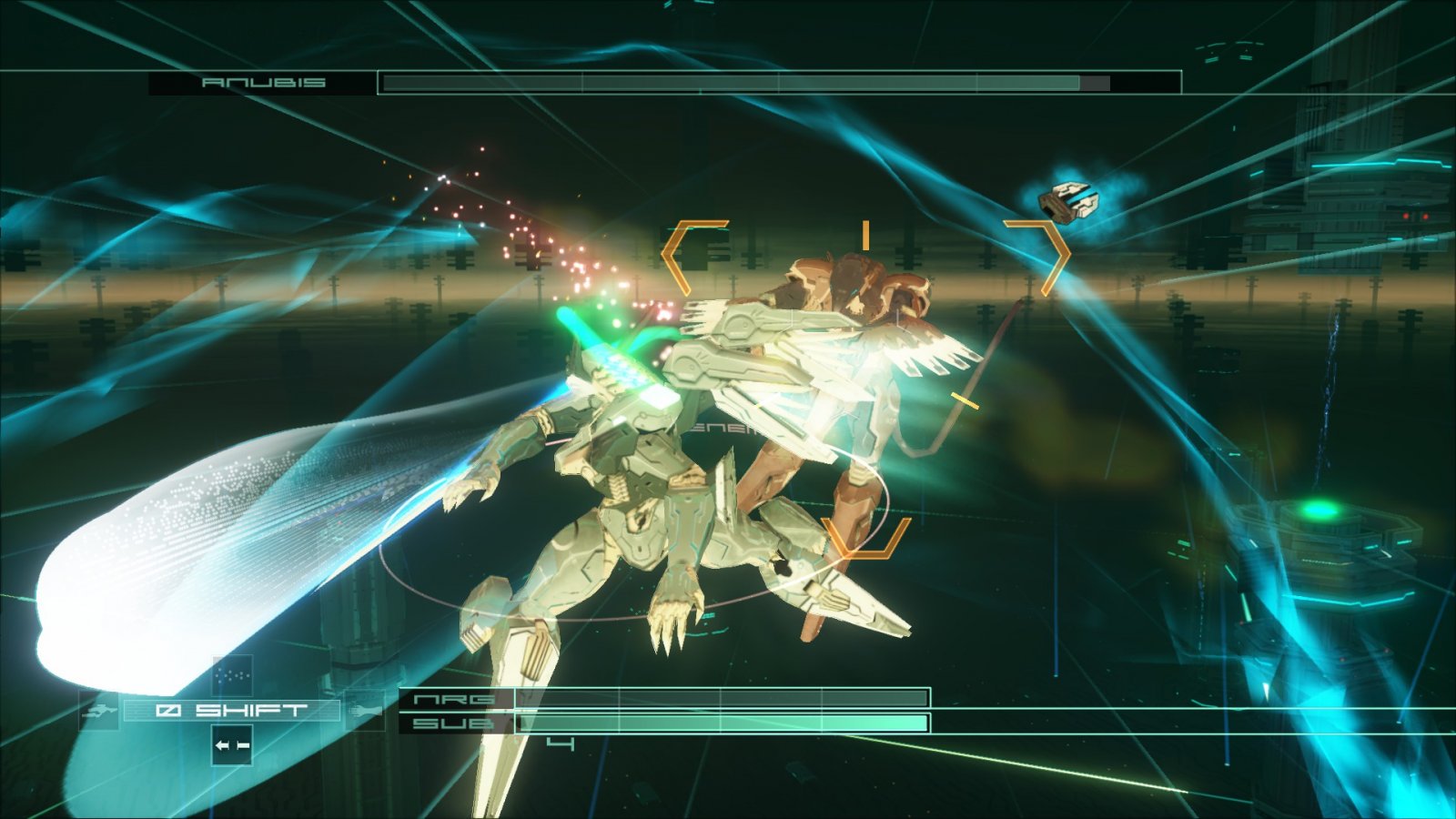 Starting Zone of the Enders: The 2nd Runner feels like tuning in halfway through a mid-season episode of an anime series you’ve never heard of at 3 o’clock in the morning. There’s a lot happening that doesn’t make immediate sense in the game’s anime-style opening cutscene, but it seems sure-handed enough that someone must know what’s going on. The game opens in 2174, with Dingo Egret, owner of the greatest name in video games, working in some sort of mining operation on Jupiter’s moon Callisto. While searching for something called Metatron, he stumbles upon a crate containing a mech (or Orbital Frame) called Jehuty. Almost immediately, Callisto is attacked by warships from BAHRAM, evidently in an attempt to claim Jehuty, which raises a lot of questions: What’s so special about Jehuty? How does Dingo know so much about BAHRAM? Who are any of these people and what does any of this mean?

A quick Wikipedia refresher on the plot of the original Zone of the Enders filled in some of the gaps, but not all, and revealed nothing about Dingo Egret and his incredible name. Fortunately, we soon learn that none of this matters, because Zone of the Enders is a game about robots blowing up other robots, not a game about whatever the hell is going on. A lot of the confusion clears up quickly, as Dingo boards a BAHRAM ship, where it’s soon revealed that he once worked for the terrorist group. After refusing to sign back up, he’s shot and left for dead by his former commander, Nohman. Ken Marinaris, a BAHRAM agent who Dingo fought on Callisto, uses Jehuty’s life support systems to secretly keep Dingo alive, claiming to be a spy for Space Force (which is apparently not as laughable an idea in 2174 as it is today). From there, Dingo heads to Mars, hoping to stop BAHRAM’s vague but nefarious plans and get revenge on Nohman.

Officially titled Zone of the Enders: The 2nd Runner — M∀RS (because not every name can be as good as Dingo Egret), the game is a remaster of a 2003 Playstation 2 game produced by Hideo Kojima. The re-release features 4K support as well as a full VR mode, which won’t be covered in this review.

One thing the Zone of the Enders series always had going for it was its fantastic mech design. The drone mechs you spend most of the game fighting come in a range of distinct models that are interesting and often creepy to look at, and more importantly, easy to distinguish in the heat of battle. The usually human-piloted Orbital Frames that serve as the game’s bosses are the real stars. Most Orbital Frames share a sleek, humanoid outline, but each has small touches that lend it personality, from Anubis’ dog-like head to the bulky wings that Ardjet uses like a cocoon to protect itself. Jehuty may be the simplest of them, but its HD paint job looks fantastic, especially when its veins of neon blue lights start glowing. The remaster really shines in the heat of battle. Jehuty attacks with blue energy blades and lasers, while enemies mostly use an arsenal of glowing red or green weapons, turning fights into extremely perilous light shows. Jehuty’s homing lasers, which fire out in every direction from its chest before streaking toward targets, are especially dazzling.

Combat mostly feels as good as it looks. With the camera clinging tight to your mech’s back, you have full freedom of three-dimensional movement as you hack and blast through swarms of robotic enemies. Your basic attacks (a short-range short swipe and long range cannon) are fast and easy to chain together, and additional block and dash abilities activate as quickly as you can push their corresponding buttons, turning combat into a varied, reflex-testing dance. More advanced tools, like charged shots and subweapons are also simple to pull off and consistently useful. By the end of the game, you’ll have the ability to push and pull enemies through the air, lock down their mechs, fire massive lasers and homing missiles, and even teleport. Each weapon is useful under different circumstances, so while you’ll likely pick a few favorites, there’s reason to use the full rotation. One thing that I found irritating is that there’s no designated button for melee or ranged attacks. You only use one button for a basic attack, and depending on your distance from your target, it’ll either be a shot from your cannon or a slash of your sword. Similarly, you can fire a charged shot by holding down a shoulder button and attacking while stationary, or perform a different dash attack by using the same button combo while moving. In the heat of the game’s hyperspeed battles, it’s easy to slightly mistime your button press and start dashing when you meant to charge.

That quirk only becomes a real problem when paired with the game’s most challenging enemy: its camera. When you’re not locked onto an enemy, you can freely move in any direction with the left stick, but as soon as you stop, the camera snaps into position behind your mech, which makes maneuvering while keeping an eye on a particular enemy impossible. You can lock the camera onto any enemy, but then your movements orbit that enemy, limiting your mobility. Switching your focus to another enemy is also extremely unpredictable. You can cycle through them with the right stick, but since you’re usually surrounded in three dimensions, you never really know which enemy you’re going to land on, and thus turn toward. Even if you manually unlock your target (which might be done by holding the same button you tap to change targets, depending on your control scheme), the camera will sometimes automatically lock onto another one. It all adds up to an unpredictable and endlessly aggravating struggle to even control which direction you’re looking, let alone manage a dozen aggressive enemies at a time. Those enemies can also interrupt your attacks with little more than a sneeze in your direction, which makes alternating between blocking and flailing wildly one of the most effective strategies at your disposal. For every exhilarating, rewarding battle where the stars aligned and I could actually keep tabs on my opponents, there were half a dozen more that felt like rolling down a hill while being pelted with rocks.

The 2nd Runner’s structure can feel just as relentless as its antagonists. Throughout the game, you’re being shuttled between combat arenas and baffling cutscenes, and the levels themselves never get more interesting than “cramped industrial complex” or “featureless expanse of desert.” There’s no element of exploration, nor even a break in the action for the most part. You just show up in a level, fight wave after wave of enemies, then sit through a poorly delivered bit of dialogue that, to be fair, seems to have been written specifically to be as unnatural as possible. Sadly, both the voice acting and the writing stay dull throughout, never quite crossing the line into Resident Evil 2-esque, so-bad-it’s-good schlock. There is one hint that the game might be going off the rails right at the end. Just before you confront the game’s final boss, he starts ranting about how humanity’s fate is decided by the will of the electrical grid, as if he suddenly remembers that he’s in a Hideo Kojima game, but the scene quickly ends before it gets really bonkers.

Outside of the antagonistic camera, my biggest problem with the game is just how straightforward it is. The story is full of jumping off points where characters could explore the weird bond that they have with their mechs or at least start chewing scenery. Instead, every interaction between characters feels like watching a kid play-acting with action figures. (“I’ll get you this time, Nohman!” “Whose side are you on, Dingo?”) And while the game’s pure combat can be fun, it gets repetitive when you’re essentially on a conveyor belt being delivered from one fight to another. The game does shake things up occasionally, asking you to carry a comrade to safety or, in one instance, play an agonizingly slow game of red light/green light with an ally guiding you through a minefield. But even these diversions just substitute repetition with something even more boring. Combat is the game’s singular focus, and unsurprisingly it doesn’t feel as great 15 years after its release. Zone of the Enders: The 2nd Runner — M∀RS isn’t without its charms, and it’s not like we’re swimming in great mech games to choose from nowadays. If you’re able to better rein in the camera than I am, you may enjoy it more, but for me it wasn’t worth the frustration. The game manages to take itself far too seriously without having anything to say, falling short of being one of the PS2 era’s true classics or beloved oddballs.

Zone of the Enders: The 2nd Runner M∀RS

Zone of the Enders: The 2nd Runner --- M∀RS is one of the best looking mech games out there, despite being a remaster of a 15-year-old game. Its fast, flashy combat still looks and feels good, but is constantly undermined by an extremely unwieldy camera. With its short, linear campaign, dull story, and terrible dialogue, The 2nd Runner seems stuck in 2003, despite its slick graphical upgrade.

A committed indoor kid, Bryan moved from Pittsburgh to Los Angeles for a prettier landscape to ignore. They can be lured outside with promises of taco trucks and film festivals, and enjoy trawling through used book stores for works on the occult. Bryan has been gaming since the SNES era and is a sucker for good pixel art.
Related Articles: Zone of the Enders: The 2nd Runner M∀RS
Share
Tweet
Share
Submit