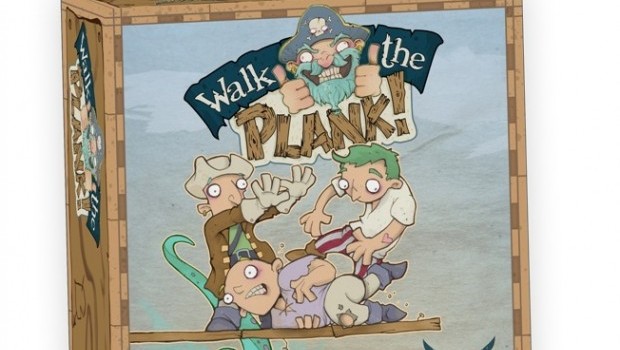 The Captain is angry. Angry enough that he has put all of you out on the plank. He wants everyone sent off to Davy Jones’ Locker! Right before he slams the door to his quarters, he looks over his shoulder and growls: “The last two of ye can stay, the rest of ye, Get off my ship!”

In Walk the Plank each player is fighting to keep their pirate alive, and safe, on the ship, while trying to push everyone else off. There is lots of shoving, dragging and even cutting off the end of the plank. Not to be taken too seriously, Walk the Plank is meant to be played in good humor. During the course of the game, there are sure to be many unintentionally amusing moves carried out by the clumsy crew of pirates.[singlepic id=16199]

Each player picks a color and takes the 3 associated pirate meeples, and a deck of 10 cards. The pirates are placed on the ship tile. The 3 plank spaces are placed next to the ship, and the hungry kraken is placed at the end of the plank. Then the game can begin.

Simultaneously, players picks three cards from their individual decks and place their selected cards face down on the table. The order of these cards matter, the first card will be activated first, and so on. Once everyone has chosen their cards, the player with the Captain’s favor token flips over their first card, performs the action, then the player to their left flips over their first card. Once everyone has played their first card, then the first player plays their second card, and so on until every player has played. After this the Captain’s Favor token is passed to the right (i.e. the player who went last will get to go first the next turn).

When a card is revealed, the player *must* perform the action on the card. Retracting and Extending the plank changes the number of plank spaces that are attached to the ship. If someone retracts the plank, all of the pirates on the last space are in trouble! Shoves let a pirate shove another pirate to the next space closer to the sea. Dragging and Pulling cause one of the current player’s pirates to move with another pirate closer to the sea or back to ship. Let we forget my favorite: Charge! This card causes the player to move one of their pirates one space forward, and forcing a pirate in the space they are entering to also move forward one.

Play continues until there are zero, one or two pirate meeples left. Whoever controls these pirates is let back on to the ship, and are declared the victors.

Mayday did a good job putting this one together. I don’t know if it was just my Kickstarter copy, but the included stickers do add to the fun of the game. The pirate meeples are great as well. All of the components are good quality, including a nice and appropriately size box.

I enjoy the art quite a bit. The silly looking pirates only help to reinforce the lighthearted nature of the game. The iconography on the cards work as a good reminder for new players as to what the actions are, even though the actions are simple enough that after a play, they are not needed.

The rules are very easy to pick up, and very clear in the rule book. The game is quick to set up, quick to teach and most games only took 15 – 20 minutes. Having a full complement of five players makes the chaos of the game shine. Three and four players is certainly playable, five is really where the game does best.

Walk the Plank fits a great niche. It is light enough that it can be taught to a bunch of people. Yet it is fast enough that if you get eliminated, you don’t have to wait long until the next game. The game play is interesting enough for ‘gamer’ gamers, but still amusing for casual gamers. It is one of only a few games that I would rather player with younger kids than with adults, just because of the amusement factor.

What makes the game so fun is how your best laid plans are quickly shattered  when your neighbor takes their turn. You will be planning to charge your opponent in to the sea when someone else plays a retract the plank card, and you end up running off the plank yourself. As the game state changes so rapidly, you will often find yourself taking actions that, even to the most serious gamer, are hilarious.

The biggest issue I have had with the game is when people are too self-preserving. I have played with a group where the last four pirates just play defensive cards and never play aggressive cards. This means that the last few turns can be very boring for those who are out of the game. Eventually someone does something, but it can drag a little when people are being cautions. It is best played without putting serious thought in to the cards you pick, and just seeing what happens.

[singlepic id=16213]In play testing this game, the best reaction I got was from more experienced gamers. The guys who meet regularly for game night seemed to enjoy it the most. They all understood that there was not real strategy to the game, and just let it play out. Without even hesitating, after the first play they wanted to play again. There were little rivalries, when someone had to make a choice on who to shove, they would tend to pick the person who screwed them over in the last game. It was great to see them put their ‘thinking hats’ aside and just enjoy the game. If only I could get them to do that with other games (playing Power Grid with them turns in to a giant, deterministic math problem).

As I mentioned before, I can see this being a great game for younger children. Before I go too far, I don’t regularly play games with young kids so I have no frame of reference However, the rules are straightforward, and the art work is accessible enough that I can see kids getting a kick out of it. I would play this with my Grandma too!

Components: Solid craftsmanship, fitting art and great iconography.
Theme: For a light game, there is a bunch of theme packed in. You will be talking like a pirate in no time.
Instructions: Simple rules for a simple game.
Gameplay: Great at what it is: light, fun, pirate fun.
Value: Plays are quick enough that people will be asking to play again and again.

If you want to call it a filler game, good enough. If you want to call it a family game, also a good choice. No matter what gaming category you put it in, Walk the Plank is still a very fun game to get to the table. It is guaranteed to make at least one person chuckle, and most likely will result in the whole table laughing. In short: I would shove a pirate to get this game.