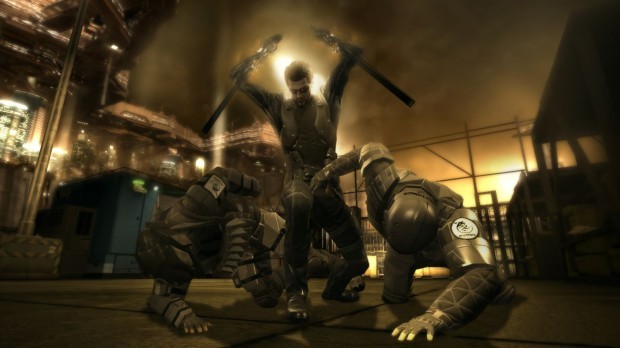 When Deus Ex: Human Revolution came out in 2011, it was considered by many to be one of the greatest science fiction video games of all time. Now, Square Enix is looking to update the game to include some lessons they’ve learned as a developer, and leverage the unique hardware that Nintendo’s Wii U console affords to breathe new life into this now-classic title. With fewer gameplay annoyances than the original and full integration with the Wii U’s second screen, it delivers an experience that fans won’t want to miss out on.

Deus Ex: Human Revolution takes place in a dystopic future where humans have begun to augment themselves using sophisticated cybernetics technology. The game explores a society where the disparity between the rich and the poor is furthered through the use of these technological advancements to create a truly depressing (and awesome) backdrop for the game. Players take on the role of Adam Jensen, a former security professional who was horribly mangled and robbed of his girlfriend after a terrible we’re-going-to-shoot-you-in-the-face-because-we’re-bad-guys accident. Augmented against his will and brought back from the brink of death, Jensen must pick up the pieces, recover his honor, and if at all possible, find his girlfriend because she was pretty hot.

The world of Deus Ex is one of the most memorable of any game and is teeming with life, or lack-thereof, which makes the game all the better for it. A visit to China reveals the terrible fate of the poor and the populous, while a stroll through a corporate building shows off the prosperity of the corrupt.  It forces the player to ask all of the questions that they should ask when presented with moral ambiguity in a dark science fiction setting. Unfortunately, this sometimes takes a backseat to the less-awesome storyline.

While the story in Deus Ex isn’t terrible, it’s a bit of a mixed bag. At times I wanted to care about Jensen, because the guy really has a lot of rough stuff going on, but his stoic personality and flat delivery of lines made him a lot harder to connect with. It’s almost appropriate given the overarching themes of the game, but likely unintentional. On the other hand, and without going into specifics, the actual events of the game and the decisions you make that lead to the ultimate conclusion are awesome. You’ll know what I mean when you see it.

The gameplay in Deus Ex is one of its more enjoyable attributes, as it allows the player to choose their own approach to completing objectives through stealth, combat, hacking, or other creative means. The levels and areas are open and provide a good mix of opportunities for each type of player, which is helpful, because some areas are especially difficult to get through, and it’s nice to have multiple strategies after the first few failures. Gun fights aren’t the game’s strong suit though, as Jensen never becomes particularly powerful, and you’ll probably die a lot (like I did), especially at the beginning of the game. Players are even given the ability to engage in lethal or non-lethal tactics, which has a pronounced impact on the game.

But if you’ve played Deus Ex before and are wondering what this new version brings to the table, or why in the world Square Enix would re-release this game two years later, that’s where the magic of the Wii U comes into play. Unlike the original version of the game, the Director’s Cut features a second screen that takes on the heavy, heavy load of managing the mini-map, the player inventory, the leveling perks, and a few of the mini-games. This clears up all of the clutter on the larger screen for the player, which is no small improvement, and makes some of the game’s features, like entering a security combination, a lot more fun. The hacking mini-game (which I played more times than I would care to admit) performs especially well on the Wii U pad and gave me a nice break from worrying about the madness on the big screen in favor of something more simplistic–Ooh! Encryption!

The game also features more streamlined boss fights, which were criticized during the game’s initial launch, because they required players to break their character’s mold and pigeon-holed them into running in guns blazing. These fights could prove especially difficult when the player had built their character to avoid a full-frontal assault. This version of the game allows for multiple approaches to each fight, so that hackers have the option of hacking turrets, etc. to earn their victory, or the stealthy types can sneak up on the bosses and take them out in less direct ways. The bottom line here is that boss fights now reflect the larger design of the game, and players now have the ability to play they way that they want to play from beginning to end.

The Director’s Cut also includes The Missing Link DLC, which players on other consoles may have missed out on, myself included. It’s a great addition to the game, and one I was glad I had the opportunity to play. It feels like part of the main game, while being different enough to break the mold and provide some variety. The DLC itself took me three hours to complete, which extends the value of this game considerably.

There are a few issues with the Wii U’s port of Deus Ex, however, one of which is the Wii U’s gamepad itself. My first shooter experience on the Wii U took place during my time with this game and it was not a pretty sight. The pad simply does not lend itself very well to shooters, as the controller is too bulky and the analog sticks lack precision. To my everlasting shame, I began playing with a frontal-assault playthrough in mind and quickly reverted to my cloak and dagger ways after an hour of frustration and death. I also ran into an issue on three occasions, wherein my character froze up in the middle of combat after I foolishly attempted to open the menu mid-combat, and I was frozen in time and only moving half an inch every ten seconds. This continued on for nearly five minutes each time until a guard finally put me out of my terrible, terrible misery.

The most glaring issue with this game, however, is that it simply may be too little, too late. It’s been two years since Human Revolution made its debut, and my Xbox 360 copy of this game has collected enough dust to suffocate a person with. A lot has changed; Graphics are much better, game design has generally improved, and most people interested in this game have already played it by now. In some regard, I couldn’t help but just feel like this game is too old at this point, and it took me the first few hours of my playtime to come to terms with the look and feel of the game, which hasn’t aged in the best way. In truth, there were times at the beginning of my playthrough where I wondered if I should continue at all, but I pushed through and am glad that I did.

Deus Ex: Human Revolution - Director's Cut may be overlooked by those who have already played it, but it is a robust experience worthy of a playthrough by its own right. The innovations offered via the Wii U pad enhance the game in ways that we all hoped the console would when we first heard about it, and it shows the potential of this under-rated platform. The improvements to the boss fights and inclusion of the DLC alone have made this game worth my while, and anyone who didn't play this game before now has the single best reason to do so.