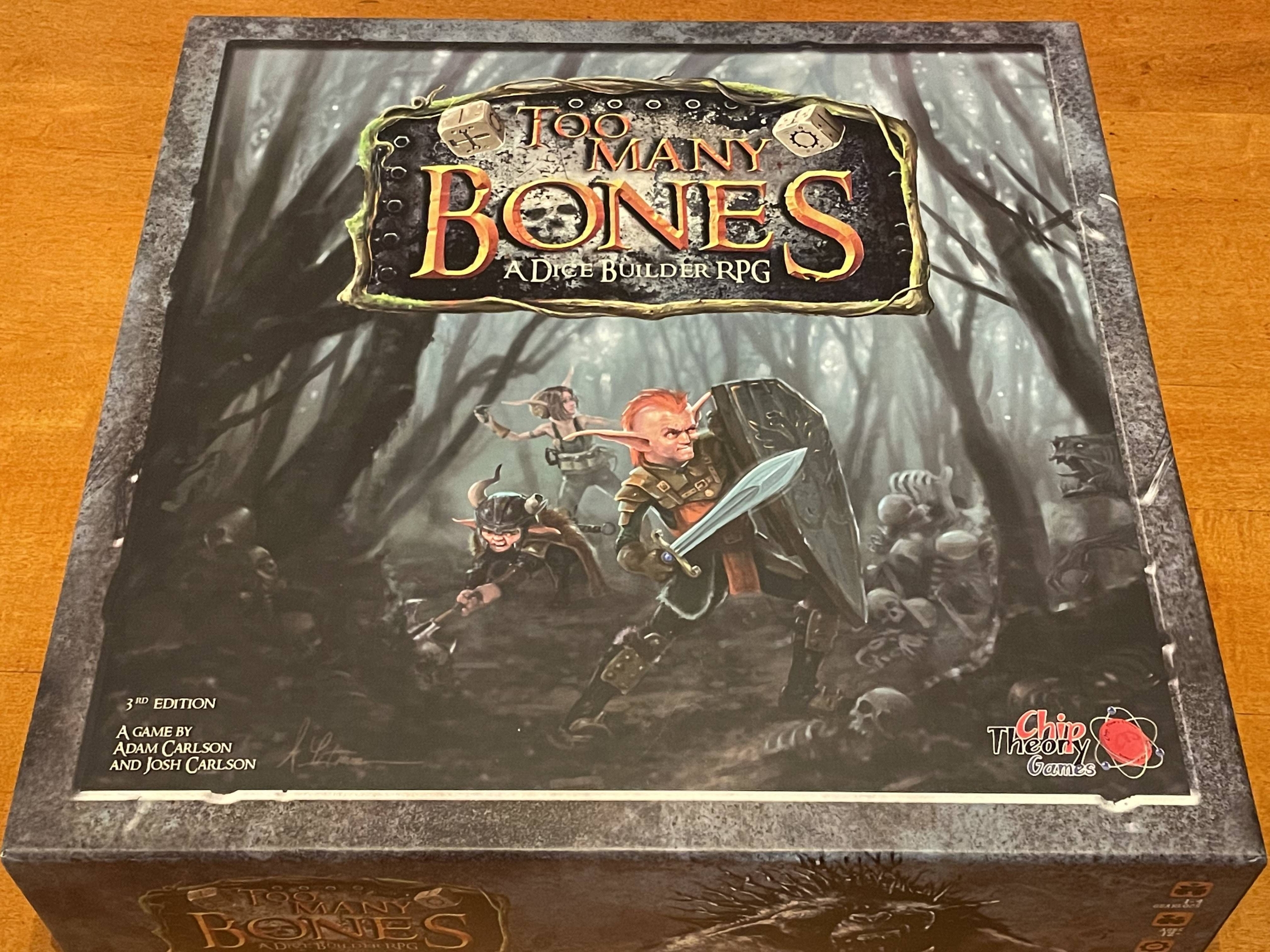 You’ll take the day you are currently on and multiply that by the number of Gearlocs in your party. For instance, in a two-player game, the number of baddie points on the sixth day would be twelve. Baddies are drawn from the highest possible stack until the baddie point total is reached. For instance, in the previous example the baddie queue would consist of two five-point baddies and two one-point baddies. This method of determining who you fight also acts as a way to balance the game for different player counts.

Stats for each baddie are located on the chip. These include hit points, initiative, attack type, and attack and defense value. Any applicable skills and who the baddie will target are shown as well. Skills are explained on another reference guide since the chip doesn’t have enough room for that. 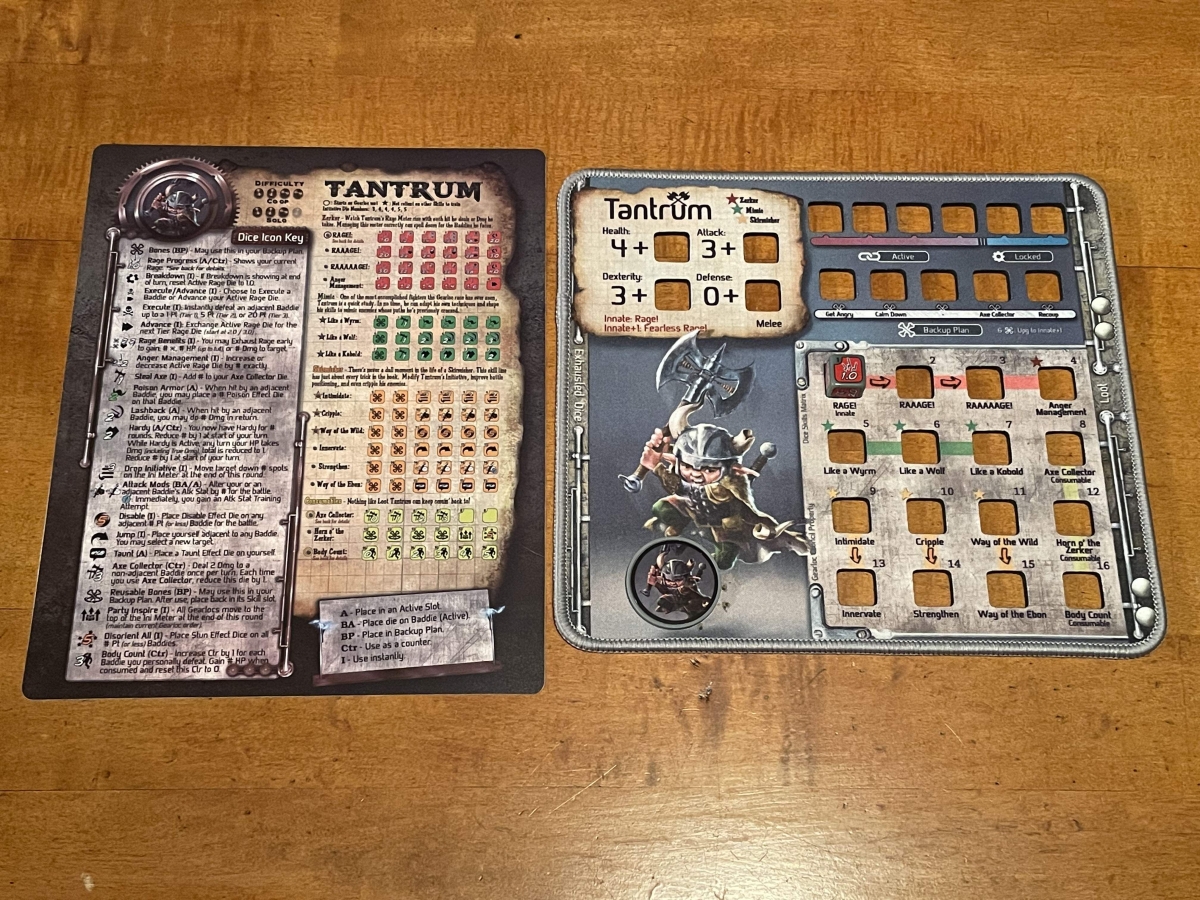 Once the baddies have been selected they are placed on a battle mat, a four by four grid, with health chips equal to their health points under them. Melee characters are placed in the middle two lines, while the outside lines are the starting places for ranged characters. Up to four baddies are placed on the mat during the initial setup in separate lanes, while the Gearlocs can be placed in any lane they’d like to as long as they are in the correct melee or ranged row. Dice representing each figure are placed in the Initiative Meter according to the order each character will take their turn. This meter is an intuitive way to see the order everyone takes their turns and can help determine which baddie to go after first.

In combat, the Gearlocs go first. After activating any start of turn effects, the Gearloc moves orthogonally up to their dexterity value. Attack, defense, and skill dice are rolled equal to the dexterity of the character minus the movement used. Defense dice get stored for the baddies attack, while skills and attack dice resolve their effects then. Baddies turns are similar with start of turn effects resolved, the target is determined, the baddie moves if necessary, and dice get rolled and resolved.

If your party is successful you get to enjoy the spoils of your labor during the reward phase. The party can receive loot, training points, and progress points. However, if the party isn’t successful they go straight to the recovery phase. The party can trade loot and make a lockpick attempt on trove loot during recovery. Then each Gearloc has the option to heal all health for themselves, discard a loot card to draw others and keep one, and scout the area to flip baddie chips so you can see what baddies might be coming along in the next encounter. 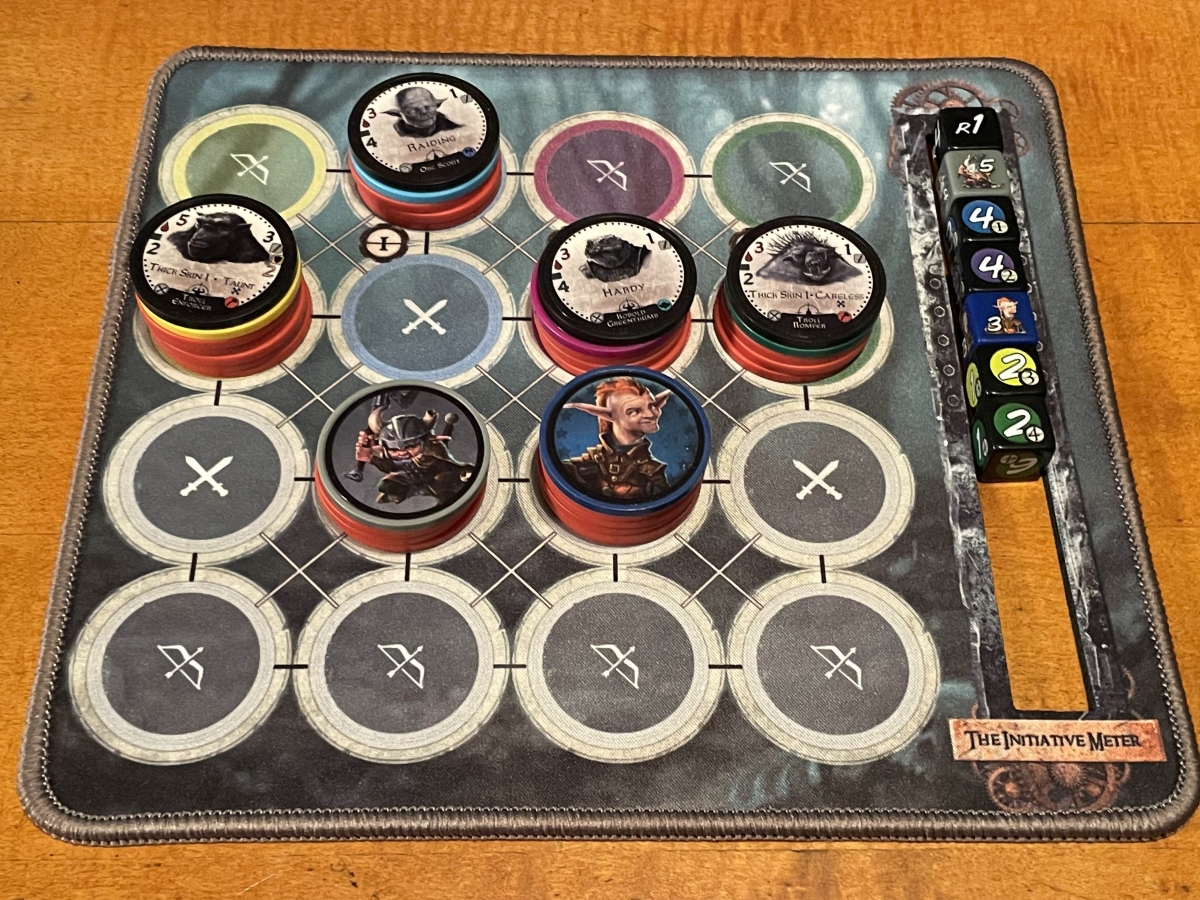 Too Many Bones isn’t easy, even at the easiest levels. Your Gearlocs start with three to five health. The one-point baddies have two to five hit points themselves. Five-point baddies can have up to seven. Upgrading your health and skills, working with your other Gearlocs, and getting into the correct position on the battle may be the difference between a successful encounter or a disastrous one. To help mitigate the difficulty, Chip Theory provided some suggestions on how to make the game easier like starting with extra health and training points for your Gearlocs at the start of the game. I wish my group had followed this advice in our first game. We barely made it to the tyrant at the end, and we got our butts handed to us quickly. However, we felt that getting to the tyrant was an accomplishment, but I would have liked to explore the available skills more in my first game.

The footprint for Too Many Bones requires a larger table than you might expect. The battle mat and player mats require space, but each player needs space for loot and a dice tray. Each Gearloc has their own reference guide, and there’s a general reference sheet too. The piles of baddie poker chips and separate card decks add more to the table. 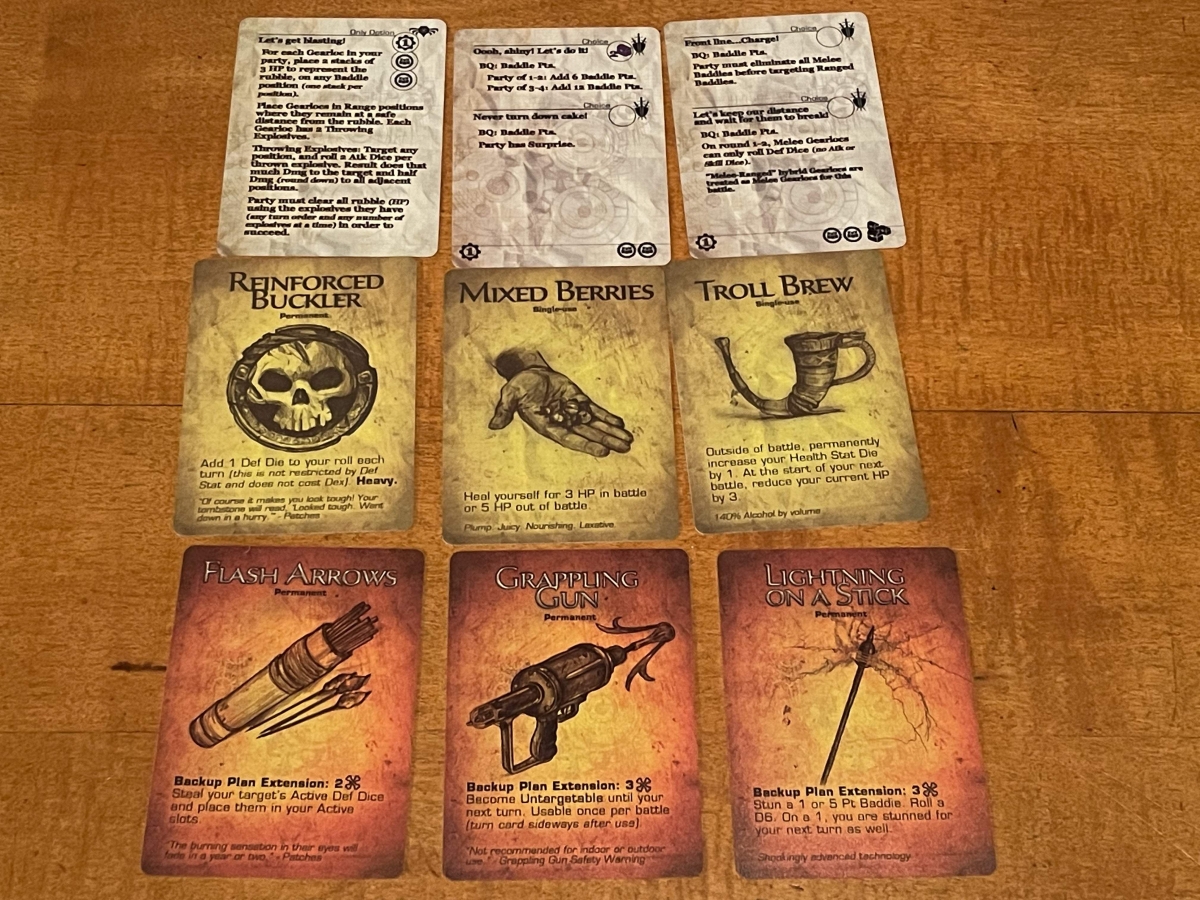 Speaking of the components, each one in Too Many Bones was well thought out. A heat transfer process keeps the dice graphics looking like new. They aren’t engraved like other dice. Each player has their own tray to hold their many dice. The poker chips for the baddies and Gearlocs have a nice heft to them, and I believe a similar heat transfer process is used to keep the graphics on the chips. The health chips aren’t fashioned the same way, but they are functional and don’t detract from the game. If you want the health chips to match, premium health chips are available from Chip Theory Games. The cards and reference sheets all have a sheen to them that almost makes them feel like they are made from plastic and can handle many multiple plays. I didn’t want to spill any drinks or leave them out in the rain to test that theory, but I feel like they would still hold up. The border along the outside edge of the neoprene mats ensure that they won’t get frayed. This comes at a cost though. The box for Too Many Bones is larger than most other boxes and heavy to carry. It’s one of the few games that won’t fit into my GameOn backpack.

The artwork simply looks amazing. You’ll see typical foes like goblins, orcs, and trolls. However, griffins, frogs, and owlbears populate the baddie pool as well. While the art on the poker chips is the face of the creature, their menacing teeth, frayed hairs, and winkles all show through. You’ll see a nice picture of each Gearloc on their player mat which gives you a true view of the uphill battle these guys have up against the baddies. Some might be critical of the fact there’s a single battle mat and there’s no indication of the type of environment each battle takes place in, but having a single area for battles speeds up the gameplay. 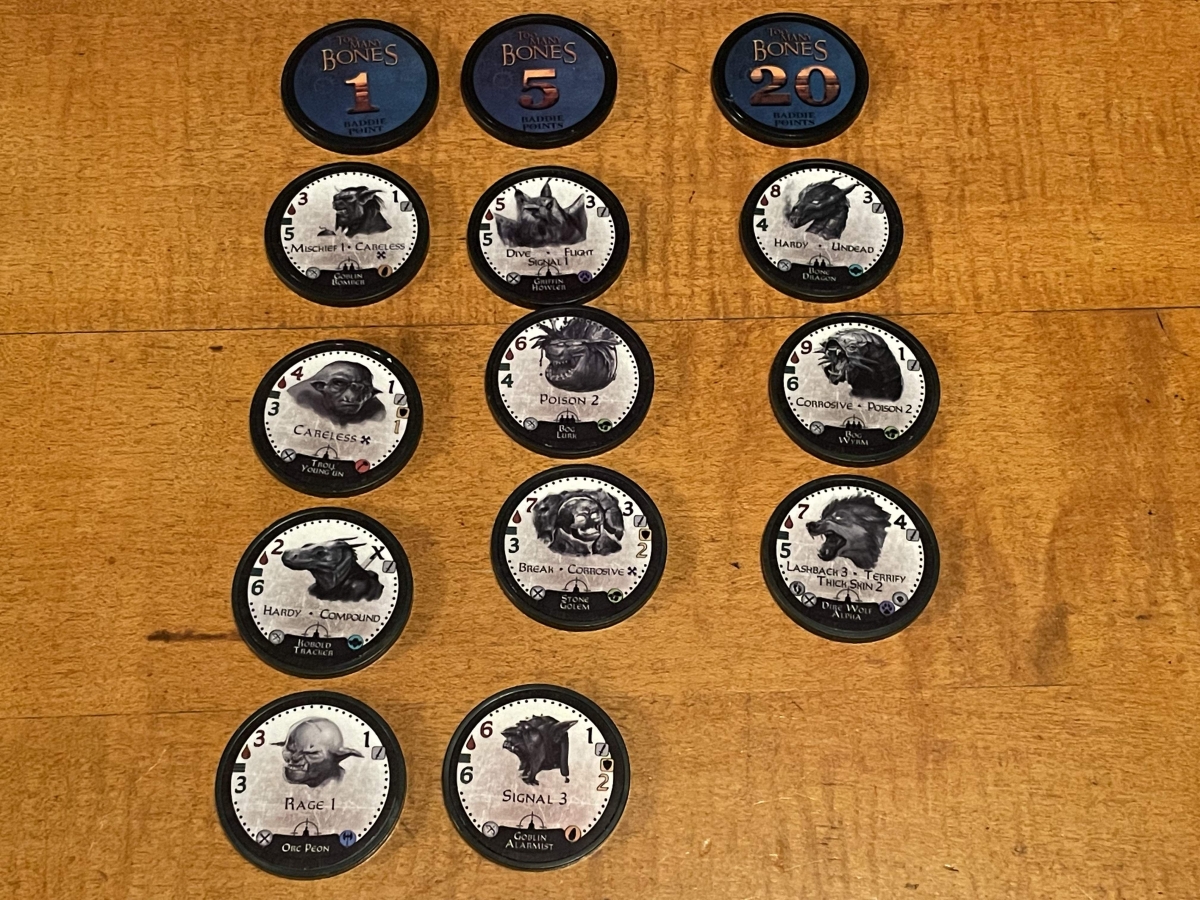 Most of the game involves the Gearlocs going into combat, so if you don’t enjoy combat then you won’t care for Too Many Bones. There’s also a steep learning curve because of the skills and abilities everyone has. Every round the combat feels more natural and gets faster. Repeat plays give you the ability to test other skills and learn how the Gearlocs work with each other. It’s a time investment, but it’s well worth taking.

Games can impress you in multiple ways. Sometimes a game wows you with gameplay. Other times the components might amaze you. The story and characters might take center stage in your mind. When all three happen, that's a rare occurrence. That's what happened when I played Too Many Bones. If you can handle the learning curve, and the price tag, then you're in for an incredible experience.

While not working as a Database Administrator, Keith Schleicher has been associated with Gaming Trend since 2003. While his love of video games started with the Telestar Alpha (a pong console with four different games), he trule started playing video games when he received the ill-fated TI-99/4A. While the Speech Synthesizer seemed to be the height of gaming, eventually a 286 AT computer running at 8/12 Hz and a CGA monitor would be his outlet for a while. Eventually he’d graduate to 386, 486, Pentium, and Athlon systems, building some of those systems while doing some hardware reviews and attending Comdex. With the release of the Dreamcast that started his conversion to the console world. Since then he has acquired an NES, SNES, PS2, PS3, PSP, GBA-SP, DS, Xbox, Xbox 360, Xbox One S, Gamecube, Wii, Switch, and Oculus Quest 2. While not playing video games he enjoys bowling, reading, playing board games, listening to music, and watching movies and TV. He originally hails from Wisconsin but is now living in Michigan with his wife and sons.
Related Articles: Tabletop, Too Many Bones
Share
Tweet
Share
Submit