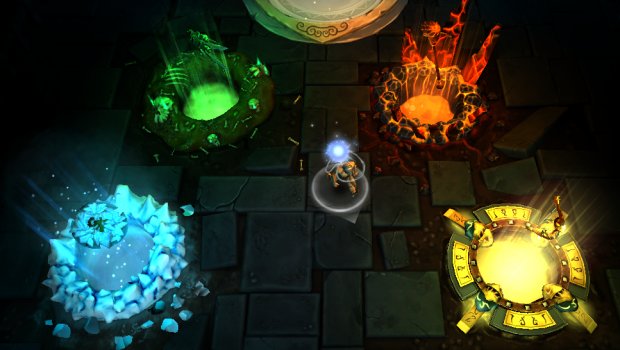 “Auuuggghh, I’m so close! Maybe I’ll just set it down for a little while, then come back to it.” This is a phrase I found myself saying over and over again when I was struggling through betaDwarf Entertainment’s FORCED. The problem was, I never did. I couldn’t stop thinking about the next challenge.

FORCED is a tactical co-op arena game. Players control gladiators who fight to advance through the grueling trials which are separated into their own respective chambers and are accessed from a central hub. After generating a lot of hype through the crowdfunding site Kickstarter, this first attempt from betaDwarf is a big risk, and I’m happy to say that FORCED succeeds in almost every way it strives.

The story behind FORCED is a bit lackluster, acting mostly as a framework to push along the gameplay. The characters are written basically but effectively. There isn’t much emotional depth of character in the game, but you’ll learn to love your cheeky Spirit Mentor named Balthus, and hate the taunting guardians who serve as bosses after clearing each chamber.

Graphically, FORCED’s environments are beautiful with a good mix of vibrant colors and dull muted tones. The models are a bit simple, with many recycled enemies, but they definitely get the job done.

At its core, FORCED has combat comparable to Diablo, with players managing skills earned as they progress through the game in order to blast through hordes of enemies from a top-down perspective. Don’t be fooled looking on the surface, though; FORCED offers a deep and sophisticated combat experience.

There are four weapon types you can carry into combat and each one is satisfyingly different. The fast daggers deal quick DPS, the hammer hits fiercely but slowly, the bow and arrow keeps you safe at range while still picking off enemies, and the shield lets you play defensively, blocking attacks as they come at you. Each weapon is different and satisfying. They all have several abilities which are set before battle, allowing a rewarding variety of combat styles even using the same weapon.

Another interesting mechanic has players putting “marks” on enemies with basic attacks and then unleashing special attacks that are stronger based on how many marks are on a target. Marks add another level of intricacy to the sometimes repetitive combat of games in the same genre.

An orb called a Spirit Mentor provides aid in and out of combat. It’s controlled by pressing the spacebar, pulling the Mentor towards the player’s location. As the orb moves across the map, it can activate switches, torches, and shrines. Shrines can power up the orb which can devastate enemies and obstacles, or aid allies. Strategizing player and Mentor location is key to completing any trial.

Even though the focus of FORCED is a multiplayer experience, the single-player is just as rewarding as the co-op. The one-player game focuses on the puzzle aspect rather than the arena combat of the multiplayer. It’s a great fit and shines as a stand-out part of the game, unlike many other multiplayer-focused games that use single-player as a tutorial. Even if you don’t like co-op games, FORCED is still worth checking out.

Only a few puzzles had me scratching my head, but almost all of them did have me struggling to finish them off. FORCED requires skill and focus which many games don’t demand from a multiplayer experience. In most co-op puzzlers such as Portal 2 and Trine, the game can be carried by one player who understands the game well enough to become the leader for his or her team, but FORCED, with its unique Spirit Mentor mechanic, demands expertise from every player.

Each new chamber forces you to master FORCED’s mechanics in a new and challenging way, slowly introducing you to a new method of controlling the Mentor. The following trials add a few mechanics shown previously in the game. Then, when you think you’ve mastered the new mechanic completely, the game pushes your mastery to its limits with a challenging boss at the end of each chamber. And after all that, before you can even enjoy your victory, the next chamber awaits, demanding new feats of you and your Spirit Mentor. This method is a simple way of teaching players without holding their hand that many modern developers, with their “press space to jump” and “press sprint to run” tutorials, should try and emulate.

FORCED’s lack of checkpoints within trials can be extremely frustrating for the less battle-hardened gamers, but if you can power through that, players will enjoy a unique and satisfying arena combat experience like I’ve never seen before.

This game is a triumph for first-time developer betaDwarf Entertainment. FORCED brings a downright daring hardcore experience to the table. It introduces mechanics that demand a level of frantic multitasking I haven’t seen in an isometric arena game, and delivers on every front. If you’re itching for a hardcore co-op action experience, then you’ve struck gold with FORCED.