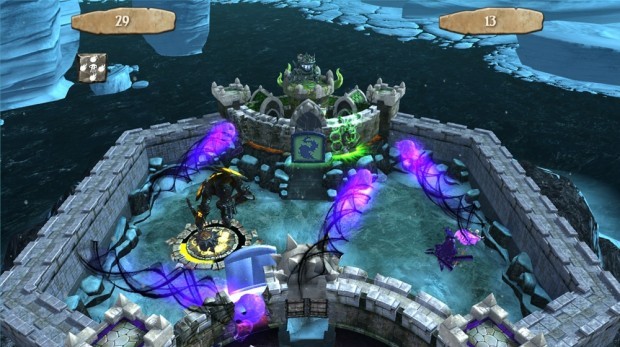 If you wanted to play a four-player video game in the eighties, you didn’t have a whole lot of choices. There were only a handful of games that would keep a group of four entertained, and until Warlords debuted in 1981 none of the options were great. Warlords played a lot like a 4-person game of Pong, but added more aggressive elements like the ability to maliciously launch the ball directly at players and multiple balls being added into play simultaneously. In 2008 Warlords saw an underwhelming remake, and now Griptonite Games has tried to revive the game once more with another recreation of the classic arcade game.

Although this new version of Warlords has changed a lot from the original, the premise remains the same: two to four players protect their castle from ever-bouncing fireballs using their shield and attempt to take out enemy castles by ricocheting and launching fireballs at an undefended castle wall. If a player’s castle takes too many hits in the same area of the castle wall a hole is made and the player loses if anything gets through. As the match continues, more bouncing fireballs are added (a max of five) and the game gets more and more chaotic until one player’s castle remains un-breached.

Also keeping with the original, players can catch fireballs and charge them up for a devastating shot at an opposing player, but unlike the original, holding onto a fireball damages the player’s castle walls the longer they do so. This keeps things moving and stops people (like me) from monopolizing fireballs.

The core gameplay may reflect the original in a big way, but it’s the other added elements that make it a completely different experience. Probably the biggest new feature are “Snoots,” your silly, incompetent minions that roam the open battlefield. Each player controls their own group of snoots which continually spawn from their castles. Snoots can be used to repair walls of their own castle, attack opposing players’ castle walls, activate power-ups found throughout the stage, and attack any other opposing Snoots in the stage. Snoots can be controlled with one of the analog sticks, or by using the D-pad to give commands.

The Black Knight is the other major addition to the game: a hulking armored beast that runs around killing snoots and bashing castle walls at random. Snoots can attack the Black Knights, and will eventually beat him after enough of them have died, and players can also launch fireballs at him, which damage him, but also attract his attention. The Black Knight’s sword can be blocked by a player’s shield when their castle is being attacked, but doing so leaves the rest of your castle open to attacks from fireballs.

The final major addition are the power-ups that appear in the arena. After being activated by a player’s Snoots, that player will gain one of many advantages, like having extra armor on their castle walls for a limited time or making all of the other player’s shields briefly switch to inverted controls. In all of the chaos, I had a bit of trouble focusing on this element, but they’re a welcome addition and make the slower parts of the game (like the beginning where there is only one fireball) a lot more fun.

The presentation in Warlords is appropriately silly, and chaotic battles manage to retain a certain degree of order through a very good use of the four playable colors that help distinguish the players from one another. The sound is appropriate as the Black Knight taunts you in a demonic voice, castle walls crumble, and Snoots scream their battle cries. The music also fits the fast-paced gameplay well and is about what you’d expect from the title.

Warlords is more than just another remake of a classic, but rather a compelling sequel. For only $5 this game offers a ton, and could easily become a staple in any household that has a shortage of four-player experiences. The game won’t wow you with its innovation and the chaotic gameplay may annoy some players, but the title is well worth the time and money it takes to get the most out the title.