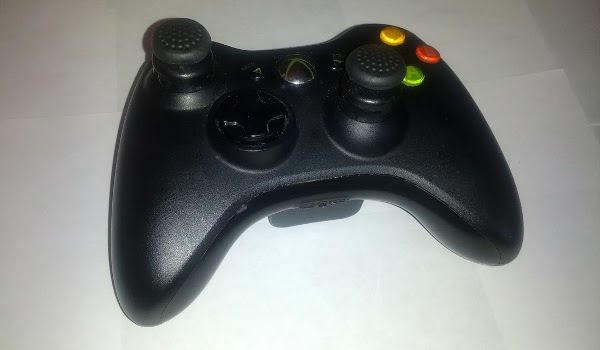 When it comes to precision, serious console FPS gamers will take any advantage they can get to add just a touch to their K/D ratio. KontrolFreek knows this all too well, and they have designed a line of control stick extensions that fit both the PlayStation 3 and Xbox 360 controllers equally. The idea is to help decrease hand fatigue in long sessions while also offering a greater range of motion for more precise aiming. I was recently sent a few models for review and put them through their paces.

Starting with the KontrolFreek UltraX: This is a pretty standard package, including two analog stick extenders of equal length, adding half an inch to each stick. They are aesthetically simple — all black with no special artwork or any other bells or whistles, appearing especially at home on a black controller. The tops are slightly convex with a grip-enhancing texture to minimize slippage.

Installation is simple, but don’t be shy. Pushing an extender down onto the analog stick at a slight angle helped it slip on comfortably but it does take a good amount of force. It also took me a couple of tries to catch evenly — particularly on the PlayStation 3 analog sticks with their slightly larger heads — but removing and trying again left no damage behind, so multiple tries were nothing to worry about. When they’re on, they’re on; the installation is very secure and I never felt concerned about them slipping off.

But do they actually make a difference in-game? Mileage may vary on that front. I’m not going to sit here and tell you that your K/D ratio will jump two points — you may not notice much of a performance difference unless you’re a hardcore stat hound. However, anything that makes the controller more comfortable to hold is generally going to result in an improvement, even if just in the form of less fatigue over long sessions.

The increased range of motion (of 40%, according to KontrolFreek) does help with more precise aiming in my experience, but the overall impact differs between the Xbox 360 and PlayStation 3 controllers. I have only positive things to say about how they affect gaming on the Xbox 360: The tight sticks feel slightly looser with the KontrolFreek UltraX extenders in place, but not too much. It’s just enough to make subtle movements more meaningful for some additional fine-tuning.

I had mixed results with the PlayStation 3 controller, though, as the unmodified analog sticks are already rather high and loose. Installing the extenders made the small controller more comfortable to hold, but also gave a “floaty” feel to the controls — whether or not this is considered an improvement is going to vary from player to player, but I found it to be an overboard adjustment. In addition, the range of motion makes the analog dead zone more prevalent on these controllers as compared to the Xbox 360 ones, so it takes slightly more effort to get them to respond.

The improvement in comfort is also not universal. I have larger than average hands, so for me, these extenders made both the Xbox 360 and PlayStation 3 controllers much more comfortable to hold. However, my wife has smaller hands, and the extenders made the sticks too long for her, actually resulting in a less comfortable experience, especially with the larger Xbox 360 controller. That said, both of us were appreciative of the additional grip provided by the stick heads on the PlayStation 3 controller — FINALLY a solution to those slippery stock heads.

I also got a chance to give the FPS Freek Phantom model a go with very similar results. For the most part, these are functionally identical to the KontrolFreek UltraX, adding half an inch to the length of each stick. However, the heads on these are slightly concave for a different grip and feel. Each Freek Phantom extender also includes a rather striking visual design that pays homage to the recent release of Call of Duty: Ghosts. The laser-etched art on these all-white extenders goes beyond aesthetics — it also adds noticeably to the grip. They look particularly sweet on a white Xbox 360 controller (and have earned a permanent home on mine) but are also more prone to gathering visible dirt and grime over time.

Finally, I gave the FPS Freek Vortex a test drive. These are a departure from the aforementioned models in that the package includes two different analog stick attachments. One is very similar to the KontrolFreek UltraX in that it extends the stick by half an inch and is intended for the right “aiming” stick, only with a swirled design and slightly softer rubber texture.

The attachment intended for the left analog stick is the biggest difference. It’s much shorter, only adding 0.3” to the height, just high enough to add a concave design with the same rubber texture. It doesn’t add noticeably to the range of motion, which makes it ideal for the left stick typically dedicated to character movement where additional precision isn’t necessary. This kit is most effective on the PlayStation 3 controller — the low-profile, concave grip is a huge improvement to the stock design. My only wish is for a KontrolFreek package with two of these low-profile Vortex grips, as I would prefer one for the right stick as well to help do away with the “floaty” feel of this controller caused by the half-inch extender.

The KontrolFreek analog stick extenders offer positive experiences overall. None of the reviewed models are more than $13.99, making these minimal investments for noticeable improvements in comfort. The Xbox 360 controllers enjoy the greatest enhancement as the stick resistance is just enough for the additional range of motion to feel complimentary. The PlayStation 3 controllers are improved by the additional grip, but the loose analog sticks tend to feel perhaps too loose with the half-inch addition (solved partially by the low-profile Vortex attachment). If you have particularly small hands, you may want to avoid these. But with several different models, KontrolFreek has a worthwhile purchase for the rest of us.

The KontrolFreek analog stick extenders are a boon to controller comfort, and the added range of motion is particularly helpful for Xbox 360 controllers. A worthwhile investment, but avoid if your hands are smaller than average.