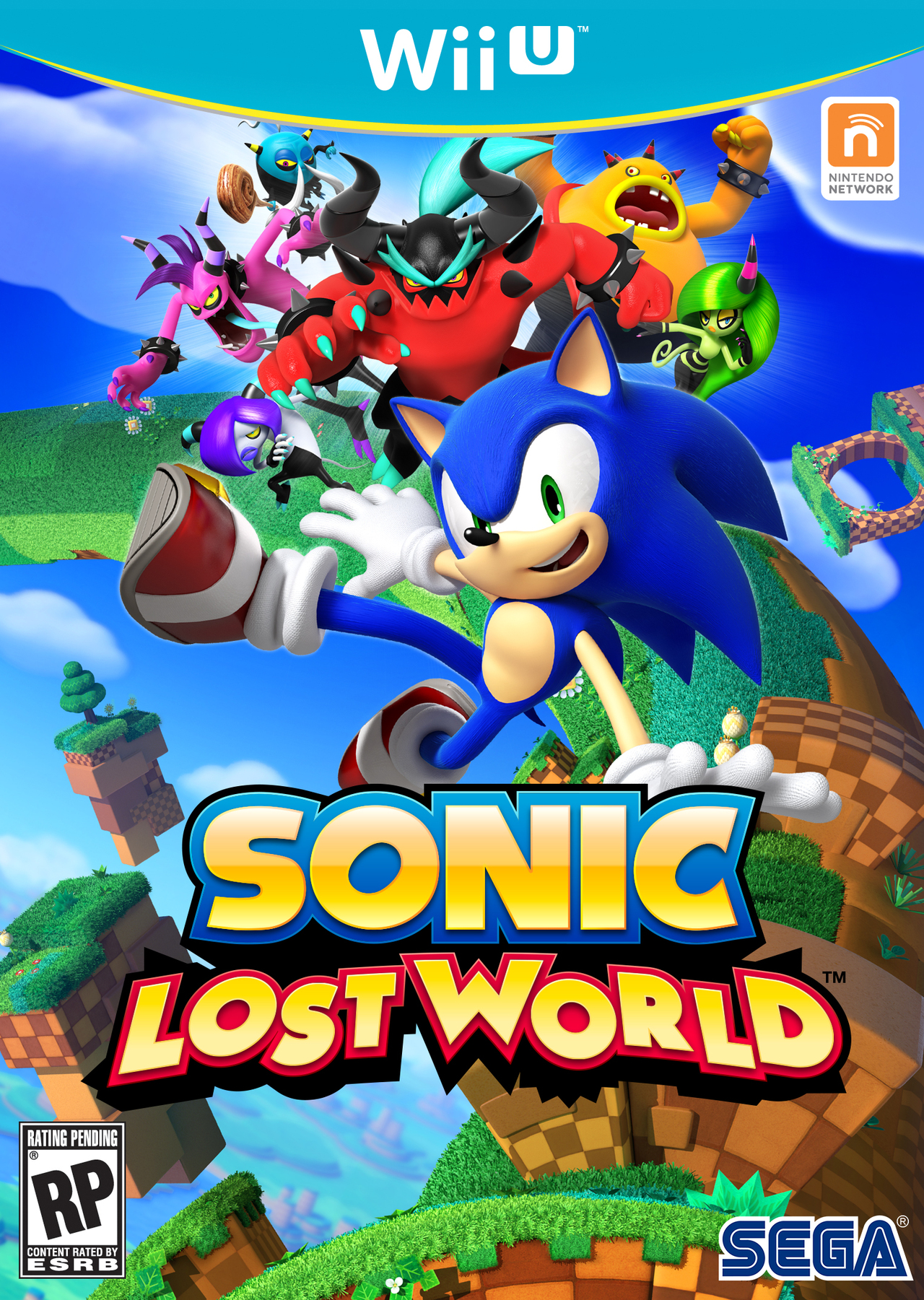 The spikey, blue haired, red boot-wearing hedgehog is back and he’s tearing up the speed limit in this Nintendo-exclusive title, Sonic Lost World. Fans of the series can breathe a long sigh of relief because this game has everything you’d want out of a Sonic title and so much more. The new mechanics, incredible graphics and ultra-creative level designs all add up to make this one of the best Sonic games since the old-school days of Sega Genesis.

[singlepic id=16826 w=320 h=240 float=left]Doctor Eggman (aka Doctor Robotnik) is once again trying to take over the world using an army of cyborg animals, except this time he’s enlisted the aid of the Deadly Six, a group of demonic inhabitants of a mysterious world known as Lost Hex. But when this group of miscreants breaks free of Eggman’s control, it’s up to the blue blur to come to the rescue and once again save the world from destruction.

The presentation is polished to a shine. The music, composed by Sonic veteran Tomoya Ohtani, is some of the best in the series. The levels are feats of design and with 1080p running at 60fps, the game looks amazing with its popping bright colors and insanely fast speed of motion. It’s almost as fun to watch as it is to play. Speaking of watching, the cut scenes are amazingly produced and of a truly cinematic quality. The voice acting is excellent and the story brings out the characters’ flaws and humor in a way that I never thought possible in a Sonic game. Normally I wouldn’t mention this for an action platformer, but I was thoroughly impressed by these in-game movies.

[singlepic id=16828 w=320 h=240 float=right]Spearheaded by Takashi Iizuka at Team Sonic as a follow-up to their previous popular titles, Sonic Generations and Sonic Colors, this latest entry walks a fine line between homage and innovation. Early news of the spherical and cylindrical level designs led many fans to worry that the title was going to be too much like Mario Galaxy and not enough like Sonic. Make no mistake, this is a Sonic game through and through. It plays, looks and feels exactly as you’d hope and expect. From the moment you’re dropped on the first stage of Windy Hill, you’ll feel right at home. You collect golden rings, hit checkpoints and bounce on top of Eggman’s machines to free animals at the end of each stage — and it’s just as fun as it ever was.

Fans of the series will also be happy to know that the physics are spot on. Sonic moves intuitively and responsively through the game world without a hitch. He’s even brought some new moves to give the Deadly Six a run for their money. One of the game’s largest innovations is the addition of a run button. Holding down the right trigger on the GamePad kicks Sonic into high gear, enabling him to Parkour like a pro, running along walls or vaulting obstacles without skipping a beat. Sonic’s pace immediately slows upon releasing the trigger. It may not sound like much, but the run button offers a completely new style of play that makes the side-scrolling 2D portions of the game feel much more precise, and there’s more control in the 3D segments as well.

With two variations in speed, double jumps, a roll attack, and lock-on homing attacks, Sonic has more moves than ever with an unparalleled sense of freedom to explore levels. Once I had a handle on the controls, I marveled at the ease with which I zipped through the spaces and took out enemies. It’s a whole lot of fun, but to be completely honest, it took some time for me to learn it all. It really wasn’t until after completing the first two or three areas (a good two hours in) before I had a confident grasp of the controls.

Part of the challenge is in knowing the right move for a specific job. The trouble is, you won’t know which move to use on which enemy until you try a few times and ultimately learn from your mistakes. For example, there are spiders in the game that can only be knocked off their web by using the homing kick, but once they’re on the ground, they can only be finished off by using the homing attack. I didn’t know this, of course, until I face-planted into the spider’s butt a few times, losing all my rings and dying. Personally, I enjoy this type of learn-as-you-go gaming, but it might be a lot to ask of casual players looking for a more streamlined experience.

[singlepic id=16829 w=320 h=240 float=left]To be sure, Sonic Lost World is a very challenging game, but it somehow avoids becoming overly frustrating. Mainly due to the solid controls and top-notch level design, when you mess up, you know it’s your own fault without feeling cheated. While there’s no difficulty setting, there are features built in to help out more casual gamers, one example being the floating wing-jump. Any time you’re down to your last life in a level, a floating wing power-up will appear, and hitting it jumps Sonic ahead to the next checkpoint. It might feel like cheating, but it can come in handy if you find yourself stuck on the same spot over and over.

Casual gamers might also consider playing the game at a slower pace rather than booking it full-steam through the level. To test it out, I released the run trigger and jogged through a few of the courses; I was surprised to find the difference it made. It’s not as impressively fast, but avoiding obstacles and taking out enemies becomes much easier. There’s really no need to worry about the clock, either. Some of these levels have upwards to 15 minutes on the counter, and generally there’s more than enough time to stretch your legs. With infinite continues and no load time between deaths, there’s really nothing stopping you from pushing on and trying again whenever you fail.

Unlike Mario, where all you need to do is stay alive long enough to reach the end flag, good guy Sonic is on a mission to save the animals (awww). If you don’t free enough of the furry critters from Eggman’s machines, either by stomping on storage tanks or defeating enemies, then Sonic won’t be able to advance to the next world. This can mean backtracking and running through levels multiple times in search of more animals to rescue.

[singlepic id=16827 w=320 h=240 float=right]Being asked to revisit levels might sound like a real pain, and it probably would be except for the fact that the level design in Sonic Lost World is absolutely gorgeous. Each and every level offers its own unique set of challenges and style of play. And it’s fun. (Did I mention it’s fun?) You’ll be hiding from giant guard owls at night, attacking bee swarms in a massive hive, and using huge pinball machine flippers to bounce Sonic to his goal in the casino level. Some may be more fun than others, but every level is an absolute blast to play.

At the end of each area, you’ll have a boss fight against one of the Deadly Six. This is where my largest complaint of the game lies. The attention to detail and inventiveness found in the level design somehow didn’t extend to the boss battles. There are some exceptions: the Desert Ruins boss, a fat demon named Zomom, and the Silent Forest’s emo-goth demon, Zor, both have unique and extremely fun battles. But the majority of boss fights primarily consist of a repetition of homing attacks and bouncing on heads. They aren’t terrible, but after being blown away by the fast-paced level design, I felt a bit let down when going against a boss.

Return of the Wisps

[singlepic id=16831 w=320 h=240 float=left]Although not a major element of Sonic Lost World, playing on the Wii U GamePad does bring some new functions to the table. As with most Wii U titles, you can play the game entirely on the GamePad without the use of a TV Screen, but Sonic Lost World also allows for dual-screen competitive gameplay between two players. Rather than splitting the screen in half, each player gets their own full screen, one player on the GamePad and the other on the TV. The GamePad also comes into play when using Sonic’s Color Powers, activated by the Wisp characters returning from Sonic Colors. Using the Color Powers, Sonic can pull various moves like turning into a drill to bore into the ground or zipping across the screen as a light-speed laser beam. These segments play out like mini-games on the GamePad screen, and they’re an interesting break from the usual action.

Not too long ago, I would never have imagined a Sonic the Hedgehog game coming out as a Nintendo system exclusive. This blue guy used to represent Nintendo’s fiercest rival back during the 16-Bit War. Now, over two decades later, with a brand new set of consoles only weeks away, it’s poetic seeing Sonic teaming up with Nintendo at a time when their latest console needs all the help it can get. Sonic Lost World is a wonderful addition to the Sonic legacy and one of the best exclusive titles on the Wii U. It harks back to the classic days of gaming that got me into video games in the first place, a time when developers aimed to challenge players rather than guide their hand through a movie experience. By taking familiar gaming mechanics and adding a fresh burst of new elements, Team Sonic has delivered a solid console title that will challenge players for years to come. And it’s fun. Did I mention it’s lots of fun?