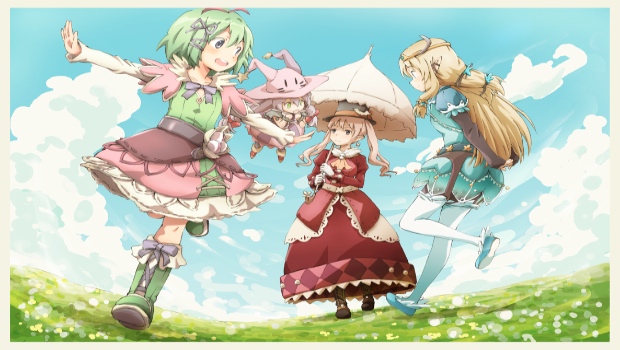 A simple summation of Rune Factory 4 would be that it’s a more proactive Animal Crossing. That would be a disservice though, since when given time, the game is so much more than that. Collecting, relationship-building, event-organizing, farming, and even dungeon-crawling with real-time combat are all combined into a fun, though not immediately accessible, experience that you should absolutely play.

In traditional Japanese storytelling, the game opens in medias res as you’re transporting cargo across a flying airship. Bandits interfere and you’re knocked off, plummeting not to your death, but into the serene town of Selphia. Suffering a bout of amnesia, you’re mistaken for a prince that’s expected to enter the town and you’re immediately put to work.

“Work” covers a far range in the game. As a prince, you’re provided a room with easy access to a farm where you’ll be spending a lot of your time. Growing crops is a huge component of the game as it’ll allow you to earn money and materials, create gifts, cultivate ingredients, and provide you with a type of currency called Prince points. Prince points are essentially the mana that you have to create mandates across town as well as expand your own abilities. You can do anything from arrange a festival to attract tourists, to expand the size of your backpack, or even get a cooking license so you can place well in a cooking contest.

A good balance of challenge and reward

[singlepic id=16504 w=320 h=240 float=left]There’s a story in Rune Factory 4 but it’s pretty inconsequential. If you’ve played any JRPG in the last 20 years then you’re familiar with it. There’s a hidden power in the land while, prophetically, you are the person capable of discovering and harnessing it. What’s fun about Rune Factory is the way it’s doled out. You’re not given a ton of freedom in the beginning since you’re only really allowed to do one quest per day, but after some investment, that’ll expand and you’ll be allowed to do more. Many of the requests focus on explaining game systems and are a good balance of challenge and reward.

The characters that populate Selphia are all archetypes that you’ve seen a dozen times before but that doesn’t make them less fun to work with or for. Character models in-game aren’t the most detailed but they’re charming in their own way. When engaged in conversation, hand-drawn stills of the speaking characters appear on the top screen, and they’re gorgeous; while a somewhat dated approach, the intricacy and attention to idiosyncrasies really help reinforce a sense of individuality amongst the townsfolk. The one gripe with the town map is that characters are always moving, and pinpointing them to finish or start quests can be something of a chore. A mini-map appears on the bottom screen showing the characters’ heads but given their tiny size, it’s hard to tell specifically who is where. Still, it is nice to get a general idea of where the bodies are.

Like a lot of Japanese games, some characters can be androgynous, and gender roles are constantly confused. The most offensive rendition came at the beginning of the game. While on the airship, you’re given two dialogue options: one exclaiming excitement for the situation, the other hesitance. Whichever option you pick determines your character’s gender. It might seem like a small complaint, but a design choice like that feels at best lazy and thoughtless — and at worst, outright sexist. It is a first for the series to have a playable female right off the bat, and in that regard the game is a step forward, but the introduction of the female character leaves a lot to be desired.

[singlepic id=16506 w=320 h=240 float=right]There’s a running clock that determines when events are to be held and when certain actions must take place. All goods for sale must be in the shipping box at 8:00 AM and not a second later. Given that your character wakes up promptly at 6:30 every morning, that gives you a minute and a half to harvest all your crops and goods. It can be a bit frantic, but that’s all part of the fun.

Aside from typical hit points, you also have a second bar filled with Rune points. Rune points determine your ability to carry out actions as mundane as fishing and sowing fields, or as awesome as shooting fireballs at enemies you encounter in the wild. This singular energy currency, while replenishable, forces you to think about how best to spend your day and adds yet another layer of strategy on top of the game.

The combat feels unremarkable until magic becomes an option. You’re given pretty standard fantasy weapons (broadswords, claymores, etc.) unless you get lucky and find something powerful out in the world, but it’s all done with a single button. Eventually, you’ll level up your combat skill with that particular weapon and be able to hold the attack button to strengthen your attack — but it never feels like it makes a noticeable difference. However, meeting more complex enemies calls for more complex tactics, and soon you’ll map spells to two of the face buttons and be forced to try them out — conventional weapons won’t always do the trick and certain magic types are incredibly effective.

One interesting mechanic actually allows you to befriend monsters you meet in the wild. By offering some type of gift that’s complimentary to the enemy’s personality type (discovered either by common sense or conversation with townsfolk), you can make monsters with lower levels than that of your “friend.” Doing so allows them to live in a separate building on your farm, in turn allowing you to use them to generate goods to sell, ride for faster movement, or even accompany you on quests to help you with combat. You can do this with certain members of your community as well, but there’s something oddly satisfying about befriending a coyote archer and having him defend you even from the most helpless of monsters. It creates a sense of friendship and bonding that you simply don’t get through conversations with NPCs.

The constant rewards are gratifying

[singlepic id=16503 w=320 h=240 float=left]Watering plants every day becomes tedious but the game makes your time spent worth it with meaningful character progression. Experience points are given for literally every action you do, and leveling-up skills individually contributes to your overall character progression. It’s a little bizarre seeing “Skill up!” for just watering seeds you’ve planted, but the constant rewards are admittedly gratifying and reinforce the necessity of behaviors you both love and find infuriating. You can’t designate skill points or anything like that, but the bump in stats with each level is obvious in that it allows you to carry out more actions before fatigue sets in.

Rune Factory 4 is a robust game with tons of content. The opening hours are a little slow, but it’s a necessary learning experience that shows you just how much the game has to offer. Whether you’re fishing, dungeon-crawling, helping townspeople, farming crops, or building weapons and armor, there’s always something to do in the game. The reward system shows you the fruits of your labor often enough that you never feel like you’re wasting time. Rune Factory 4 is a game that you could easily dive into for twenty minutes or two hours at a time, and it seemingly never ends. There’s always one more thing you can do to improve your station in the town, or the town’s station in the world. Neverland Co.’s debut on the Nintendo 3DS is an absolute blast to play no matter what you’re doing in it.