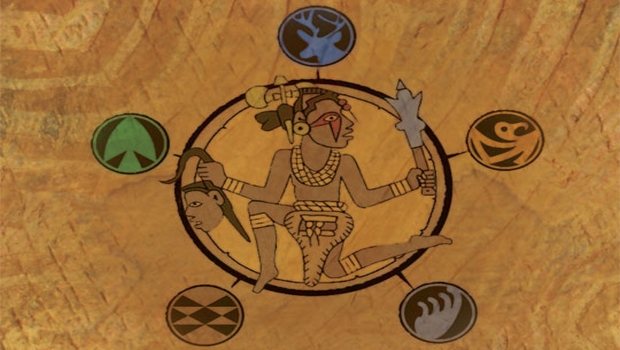 Mound Builders, like Victory Point Games’ other States of Siege solitaire offerings, is a well-researched strategy adaptation based on historical events. That’s right – solitaire. As in, you play by yourself. I admit this is the first I’ve heard of such a system. I haven’t played basic solitaire since college, when I refused to pay $17.99 for another month of AOL service and there wasn’t anything else to do with my computer. I wasn’t exactly psyched to try this. Plus, the instruction manual reads like one of the less interesting books of the Bible (think Numbers), right down to the notation and multi-column pages.

On the other hand, I live in an outdoorsman’s paradise where almost nobody I know ever wants to sit indoors and play games. I’ve turned into one of those old board gamers who fends off withdrawal by endlessly replaying every Total War release, despite that brand’s uncanny knack for creating ultra-lame endings. Seriously, I know I’m about to choke on my own vomit if I’m desperate to spend another hundred hours playing Shogun 2.

Mound Builders is a refreshing change. The theme is interesting. Living in Wisconsin, I grew up learning about the prominent effigy mound sites in the region. If I’m not mistaken, one of the game’s creators, Ben Madison, is a Wisconsin guy himself. Mound Builders is painstakingly researched. All of the fifty playing cards, while presenting actions to progress the game, also provide a brief description of one aspect of Native American culture. Here’s an example:

“THE BUZZARD CULT: Mississippian culture was defined by a new and distinctive religion, glorified by experts as the South Eastern Ceremonial Complex. Known to earlier writers as the Buzzard Cult, thanks to its images of bird men/gods, its purpose seems to have been to spiritually justify powerful chiefs as renewers of the world. It flourished between 900 and 1450. Remnants persist in the Wisconsin Ho-Chunk legends of ‘He Who Wears Human Heads as Earrings,’ whose roots may go all the way back into Maya mythology.”

The objective of Mound Builders is simple: Survive. The game has three distinct phases. During the Hopewell Era, you expand the boundaries of your prehistoric empire, consolidating regional Chiefdoms within your locus of control. This is the most critical era, as it sets you up for the remainder of the game when the other five Tribes organize to counter your advances, and for the ultimate arrival of the Spanish. The game features a functional economic engine driven by trade, yielding “Action Points” (APs), the game’s currency. Basically, the larger your expansion, the greater your ability to trade and the more APs you have to spend.

During every turn you pick a card and follow the listed effects. After resolving the actions of the Tribes, the Spanish, and/or the Black Tortoise, calculate your available APs and decide how best to spend them. It costs APs to move and/or attack, to improve the fortification of your capitol in Cahokia (just east of modern-day St. Louis), and most importantly, to build Mounded Chiefdoms, representing a permanent bond between you and that Chiefdom. Mounded Chiefdoms are critical because they are less likely to revolt, and they will stand their ground against invading tribes and the Spanish. All Chiefdoms have a defense value which is the number you must role above in order to conquer that Chiefdom or successfully defend it once conquered. That value is further modified by a card effect which puts one or more Tribes either into Ascension or Decline. Keeping all of this straight takes practice! The Hopewell Era is one of peace; you are the only aggressor. Take the opportunity to expand as quickly as possible as this is the only chance to reveal Chiefdoms and increase trade.

During the Mississippian and Spanish Eras you are on the defense. Peaceful expansion is a thing of the past so you can no longer reveal new Chiefdoms. The best you can do is keep the invaders at bay while continuing to fortify Cahokia and build Mounded Chiefdoms with the territory you control. Dice rolls can have a big impact on the game, especially if you were not effective with your rolls during the Hopewell Era. Managing your economy given the fortunes of the dice and cards is the essence of Mound Builders, and is what makes it both challenging and fun. I’ve played it several times and beaten it once, but every time I played I thought I was going to win easily. The problem is the Spanish. Once they arrive, all bets are off. If you managed your economy, constructed and preserved two or more Mounded Chiefdoms per warpath and fortified the Cahokia Palisades, then you have a chance to survive. Where the Spanish arrive is random; you can’t put all your resources into one warpath. And which Conquistador leads the Spanish invasion is also random, but the Spanish are no fools. The stronger your empire, the greater the historical general sent to destroy your culture. This last bit of game balancing is pure genius. Whether you must face Vaca, Coronado, Heredia or Pizarro depends on your ability to defend and a little luck. The first time I played I drew De Soto – no easy task but I was able to fend him off. But the Spanish are relentless, and the game ends only after their second invasion. Pizarro kicked my tail all the way from the Cherokee Homeland to Cahokia in a single turn. Sure, the dice ran cold, but if I had more Mounded Chiefdoms fighting along the way, and if I had fortified Cahokia I would have had more chances to stop the Spanish advance. And so it goes.

The game manual for Mound Builders reads like a textbook and the outline format caused me to constantly flip back and forth to other sections as referenced. In my opinion the rulebook is the biggest knock against the game. Here’s another example:

“Post-Hopewell Era Actions. [9.5] Improved Storage Pits (Advanced): If you are playing the Advanced Game and you control a Mounded Chiefdom that produces Seashells, you can spend APs equal to the number of Wilderness Lands that you currently control (minimum of 1) to flip over the APs marker (17.2), improving your ability to save APs at the end of a turn from one to two (9.11).”

The two outline points that are included are from later in the manual, forcing the reader to skip ahead to understand this rule. Furthermore, since it is an Advanced rule, why not simply include it with the other Advanced rules in the Advanced rules section at the end of the manual? At that point, it’s safe to assume the reader knows the basic rules, so this particular rule could better written, something like this:

[18.5] Improved Storage Pits: After the Hopewell Era, if you control the Seashells Chiefdom and it is Mounded you may spend APs equal to the number of Wilderness Lands you control (1 minimum), allowing you to save 2 APs.

There’s a subtle art to writing game manuals (I know this from experience). Victory Point Games clearly recognizes the complexity of their games requires a lot of explanation, but they could benefit from a more balanced approach. Learning all the rules and then remembering all the little things you have to do requires a few plays, even for experienced gamers.

I’ve only scratched the surface of the rules and variations. The Buzzard Cult plays a significant role in the Advanced game. There’s also the risk/reward of defending Mounded Chiefdoms, Colonization, the effects of Revolts, and the Black Tortoise. In short, Mound Builders offers enough complexity and variation to stay interesting. I don’t see any reason to play solitaire ever again. This is a satisfying game for experienced board gamers who can tolerate a long-winded rulebook. It is inexpensive and portable, and can be played in less than an hour. The age recommendation of 13+ is appropriate, but it can be taught to patient younger players.

Victory Point Games offers two retail versions of Mound Builders, effectively basic and deluxe sets, the only appreciable differences being the inclusion of a heavy cardboard, jigsaw-cut version of the game map, and the slender box that everything comes packed in. Probably not worth the extra nine bucks unless you have young children who are likely to rip the standard paper map. At the basic edition price you get everything you need to play, and the components are visually appealing and well-constructed.

Beyond the robust flavor text, I get the feeling Victory Point Games is genuinely interested in this kind of anthropological venture. Their other States of Siege offerings run along a similar vein. Mound Builders is a great alternative to turning on the PC or console for another run through of some exhausted first-person shooter. It causes you to think, and you’ll learn something.

An innovative single-player boardgame, Mound Builders is a great alternative to turning on the PC or console for another run through of some exhausted first-person shooter. It causes you to think, and you’ll learn something.