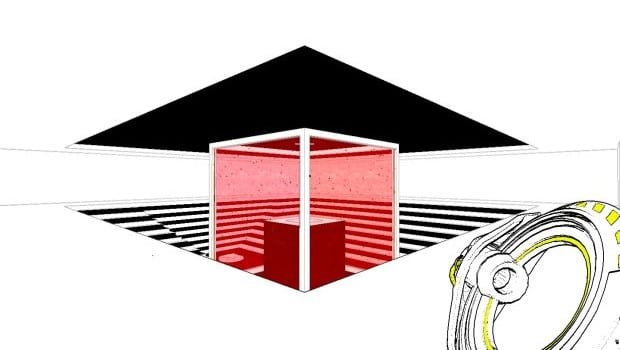 Antichamber is a game about different perspectives.

It’s about looking at problems from different angles, as the solution is usually not as obvious as it appears. It’s about paying close attention to your surroundings, and learning from everything you see, hear, and touch. It’s about building off of previous experiences to look at other situations in a different way. It’s about realizing that sometimes, you need to take a few steps backward in order to move forward. But most importantly, Antichamber is a game about removing yourself from conventional thinking, and attacking problems in ways you’d never think of otherwise.

It’s hard to explain exactly what Antichamber is without spoiling what makes it special, so I’ll do my best to dance around it. Inspired by non-Euclidean geometry, Antichamber is a first-person puzzle game whose goal seems simplistic: make it to the exit. Look at that door – the exit is right there, just out of reach. But it’ll take some serious brainpower to get from the starting area to the final room of the game, and the shortest distance between two points is definitely not a straight line.

[singlepic id=10617 w=320 h=240 float=left]Antichamber’s unique hook are its rooms and puzzles that double back on each other, twist, turn, and generally betray any sort of conventional set of rules. That’s not to say Antichamber doesn’t have rules, but it’s as if these rules were written down by M.C. Escher, then picked up and turned into a video game. You’ll deal with never ending staircases, rooms that seem to transform before your very eyes, as well as generally dealing with things that would never exist within real life.

And yet, despite all of its crazy geometry, puzzle arrangement, and room placement (the map helps in a way by letting you instantly zip to most of the rooms you’ve accessed, but it takes a while to get the hang of how rooms connect to one another), Antichamber has its own logic that it drip feeds to you as you progress through the game. It never explicitly explains how you’re supposed to solve the different puzzles – all you get is a general list of controls – but each puzzle you complete will directly feed into the rest of the game. Just when you think you have a handle on its rules, Antichamber will throw you a curve ball, keeping things interesting. It constantly builds on itself, and it will take some incredible perception and persistence to figure out some of the more devious puzzles here. There are a few progression halting moments that require especially astute observation, but all of the puzzles make sense, in its own twisted way.

[singlepic id=10618 w=320 h=240 float=right]And this is what makes Antichamber, and by extension, you, feel brilliant. Each puzzle so gently builds off all of the previous ones you’ve solved. You’ll start with a puzzle presented to you in an obvious fashion. Then, you’ll be asked to do it again, albeit in a far less obvious way. Then you’ll learn a new wrinkle in the design – maybe the addition of interactive blocks or a set of laser gates – and are asked to combine previous knowledge with this new information. Then, the game continues to expand on these rules and demand that you remember them. No, they don’t typically conform to any sort of “normal” every day logic, but each of the rules makes sense within the context of the game, and the feeling of actually learning how to play the game – rather than being told how to play the game – is astounding. The learning curve is progressive, yet you never feel like its holding your hand, and, like Portal, is one of the few games to manage this perfect explain/perform/reward loop.

To say that Antichamber is a striking game is an understatement. Using bold strokes and minimalist design, the game looks gorgeous in its own unique way. Lines fade into nothingness and various effects and colors will play tricks with your eyes. The entire game looks like a living Escher painting, and the minimalism only highlights its abstract nature. There are some low-res drawings strewn about the game, which only become highlighted by how clean everything else looks, but honestly, the game’s aesthetic is fantastic.

[singlepic id=10619 w=320 h=240 float=left]This is probably one of the hardest reviews I’ve ever had to write. Not because I didn’t know what to say, but because I want to say too much. Saying anything more than I’ve already explained will ruin the experience – and Antichamber is definitely an experience. The feeling of accomplishment in this game is one of the most gratifying I’ve ever felt, and the few hours I spent inside Antichamber’s world felt like interacting with someone’s bizarro art exhibit. I wish I could forget everything about the game just so I could replay it and experience that same wonder, that same rush of exhilaration with every solved puzzle – and that is Antichamber’s greatest accomplishment.