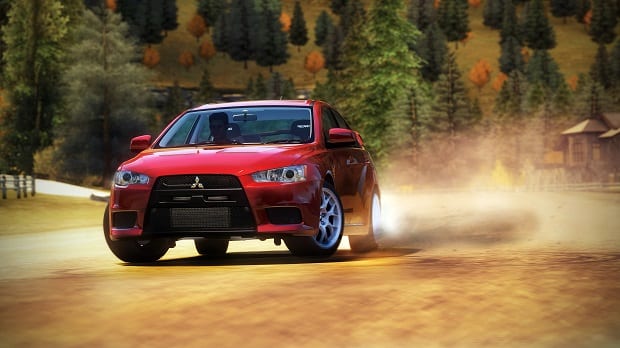 Turn 10 Studios has taken their highly detailed, physics-based Forza racing engine and done something radically different – they’ve let Playground Games use it to build a sandbox racing game. Leaving the traditional race tracks and extreme tweaking behind, we get to take a plethora of Forza’s super-detailed cars to a fictional auto racing competition in a pre-shrunk version of Colorado – complete with road traffic throughout the mountains, deserts, forests and freeways. Kinect GPS, skills challenges, and even photo opportunities and free range exploration has us heading in an entirely different direction. Let’s pull the hood release and see what makes Forza Horizon tick, shall we?

If you ain’t first, you’re last!
[singlepic id=9471 w=280 h=210 float=right]”Forza!” is apparently used to mean “Go!” … and Horizon does just that. With the same parts upgrade options available as in Forza Motorsport 4, you can spend all day tweaking and customizing your rides. Add spoilers, change rims, up-or-downgrade your cars to fit in the class you want to race. Even the full customization options for paint, logos and  self-made vinyl decals is all right here. And the driving?  As you move between vehicles, each has a distinct feel. The power of a 2013 Shelby 500 will punish lead-foot tendencies, but hop into the stock McLaren F1 GT and all that power moves it forward without the low-end burnouts unless you try. Even riding the bumper cam will be different when you hop into a Ford F150 or the LandRover, and let’s not lose sight of the racing physics.

[singlepic id=9474 w=320 h=240 float=left] From dirt to pavement, racing or exploring, you’ll be earning points which give you credits to spend on upgrades, fast travel or new cars. By pushing yourself to trade paint, burn out, drift, e-brake drift, 180’s and even pull off J-turns all start a  point counter that pays out for both the individual move, as well as upping a modifier for successfully stringing skills together. You can’t do burnouts constantly to build it up either – skills need to vary or the counter stops adding up. Also, you need to keep control beyond just the execution – slamming into a guardrail or another car will strip you of the points you’ve just earned. Though it isn’t a show-stopper, there are problems – the system doesn’t feel fairly balanced and you’ll be punished and lose out points too quickly which sucks some the fun out of it. The other side is that if you manage to recover from an accident, there is a dead time where even if you start pulling off another amazing chain of moves, the counter won’t come up for a few precious seconds – and in a Skills challenge where the clock is ticking the penalty seems too severe. I’ve also found that I also didn’t get rewarded for certain moves such as pulling off 360’s at high speeds, though I don’t know if it is because it didn’t pick up on it or if there were move restrictions I was unaware of. A tutorial mode and perhaps scaling the window with the set opponent difficulty would have deflated a lot of that frustration.

The drivers are ready, the world is watching.
Once more, I give you what you want!
[singlepic id=9464 w=280 h=210 float=right] The game world is by no means gigantic, but in touring the outer-most ring (where the map still extends beyond that) at speeds that average around 90 miles per hour I clocked it at a respectable 17 minutes . The roads themselves are lined with buildings, guardrails, and other barriers that prevent you from heading too far into the bush – while this might frustrate some, I can’t honestly see value in taking a Ferrari off-roading. There are some off-the-beaten-path areas to explore, but for the most part there are pockets of roads set up in the various environments. Good enough for Forza Horizon, though games like Test Drive 2 Unlimited put less into detail and more into exploration. I should also note that Playground Games included full day and night cycles, and even at night everything looks fantastic. Some of the background action can look a little two-dimensional, such as waterfalls or geysers, but this game is about the cars and they always look great. When I say great, I mean even the cosmetic damage looks fantastic.

[singlepic id=9466 w=320 h=240 float=left] The racing is generally restricted to class (D,C,B,A,S,R3,R2,R1) and type (eg: American muscle, or Asian cars older than 1980). When you enter either a Horizon sponsored race or street race you’re offered to: upgrade or downgrade your current car based on entry requirements, select a different car you own, or go buy one that meets the requirements.  There is no direct link to be able to adjust what gets modified in the tuning at that level though, so be prepared to revisit the garage if you happen to want to return to your current build. The fact that auto-tune (sorry!) is available is nonetheless a fantastic addition. It keeps the game moving forward, which is key in a racing game. The built-in GPS also helps set you up to get to the next events, and even uses Kinect voice commands – it would be nice if they’d added a few more options like “GPS closest Horizon outpost”, “GPS Nearest [event type]”, and the much needed “Stop telling me there are races available”. Not that you can’t turn audio notifications off from the menu, but when you’re exploring the world of Forza Horizon it would be nice to have the option to squelch race organizers from pestering you.

Hey Stampede, how ’bout a poem?
[singlepic id=9479 w=280 h=210 float=right]  Multiplayer is segmented away from the single player experience: no drop-in-and-play mechanics here. I don’t know if it’s due to development, design, or hardware limitation with the Forza engine being as demanding as it is, but the one thing I wished that had made it was an experience similar to Test Drive Unlimited 2 where people share the game world. Random traffic is nice, and there are almost 300 other AI racers roaming the countryside in single-player mode for you to challenge on the open roads, but far better would be if you could elect to let other gamers in as you play. As it stands, Horizon does have a free-roam multiplayer component, where you can create your own events such as everyone heading through a designated speed trap within seconds of each other. Let me tell you, that is far harder than it sounds. The usual plethora of racing multi-player is here too, such as straight-up racing, king of the hill, cat-and-mouse, and even a zombie racing mode. The variants were a lot of fun to play, though given that no one has the game yet, it’s a little hard to just how long it will remain so.  The single player demo which is currently available is decent in terms of introducing people to the game, but it is by no means an accurate representation to the scale and how much fun it can be. I should also mention that Forza Horizon will have Smartglass support, though details (and access) are currently unavailable at the time of review.

[singlepic id=9472 w=320 h=240 float=right] Just like a paint job, it’s easy to pick apart a game with so much perfection behind it – any flaw stands out. The points system that doesn’t scale based on challenge, the lack of drop in-any-time play, the limited Kinect commands and the lack of customization before races should be obvious to anyone who’s played the game for more than a couple hours. But getting behind the wheel of one of the most realistic driving engines and booting around, challenging racers, and having all kinds of fun adds value to all cars – not just the ones that are ridiculously fast and expensive. I’ve played the game at numerous difficulty settings both with 360 controller and MS Force Feedback Racing Wheel, and have come away impressed. The bottom line? The premise, the cars, the traffic, the driving – Forza Horizon is a blast to play!