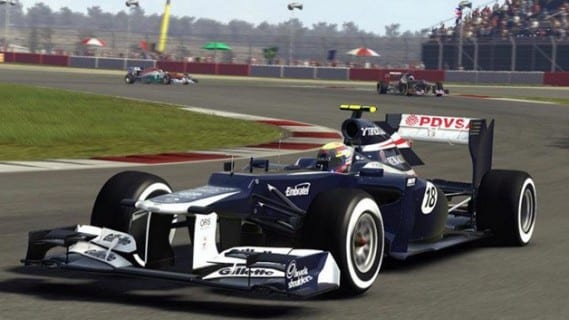 Formula 1 2012 is the third title in a series that has been releasing annually. Improving upon the last two installations, F1 2012 puts the player behind the wheel of a Formula 1 race car. The game aims at recreating the world of Formula 1 racing and excels at doing so.

In career mode, players will deal in all aspects of becoming a pro race car driver. Choosing your team, responding to e-mails, and trying to meet requirements set for you by your bosses are just a few ways that F1 2012 immerses the player. After a brief set of tutorials, you get a shot at your first race. Racing in F1 2012 is difficult to learn, even after the tutorial, and with the aid of glowing dotted line on easier difficulties, because it is extremely realistic (from what I can tell; having never driven over 80 mph). For example, players are required to take their choice of tire into consideration depending on the track’s terrain and the weather, and driving off the track will cause damage to the car’s tires–and that’s just your tires. The game also requires the player to carefully time each turn or risk spinning out of control, losing valuable seconds in the process. Mastering each element of F1 racing can be rewarding, but undertaking it is not for the faint of heart.

Formula 1 2012 is a very realistic racing simulator, but to players looking for excitement, I’d suggest looking elsewhere. The extremely long races, constant red tape (like being penalized for ramming opponents off the road), and difficult controls that make players sweat every turn make F1 2012 frustrating and tedious. I had a hard time getting through even a handful of races, because of these frustrations. Furthermore, many of the races pit the player against other racers’ times without actually racing alongside them, which means you’ll be spending a lot of time alone, and repeating the same five minute lap for more than a half hour. I understand why someone might want to play a realistic F1 racing game, but to fans of Need for Speed, Gran Turismo, Forza, or Project Gotham Racing, don’t expect a similar experience here.

There are many modes in F1 2012, like Champions Mode, which challenges players to race against the pros, and Season Challenge, which gives the player ten races to become the world champion, but each mode is indistinguishable from the other in terms of gameplay.

The multiplayer is a different story. The added element of other human players make things more fun and unpredictable, and shorter races make playing more bearable. I did not race well online (there were too many people who clearly had far more experience than I), but I did manage to ruin a few people’s day with my reckless driving methods and “unique” style, which was honestly the highlight of my time with this title. For serious players, multiplayer provides a fresh gameplay experience that is in contrast to the quickly-exhausted single player racing formula.

The controls in F1 2012 are smooth and simple to understand, but it takes a lot of getting used to before the player can even get close to winning a race. After hours of playing, I am sad to report that I never won a race; in truth, I never really came close, but that’s more in the practice of providing realism and less in the controls. After the tutorial, the player should have no problem operating their vehicle without mechanical trouble (just don’t expect to do well in races without some serious discipline).

The graphics in F1 are mediocre at best. The tracks and physics look good enough, but courses are large and empty with little to catch your eye other than the pavement ahead. When players are making a pit stop or are at their desk checking e-mails, the graphics get worse, which look like they are just barely HD; human faces in particular aren’t great to look at. This is combined with an audio design that I can only describe as bizarre. In the menus and during non-racing events ambient, electronic music plays which feels like an odd choice. While you’re on the track, it’s not so bad, as you get to hear some pretty cool car sounds, but it becomes tiresome in the endless races. This is compounded by the robotic voice that periodically comes through the radio to announce things as they develop, which only serves to annoy the player.

Formula 1 2012 is a great F1 racing simulator, but it’s only an okay game. For a title that aims to be approachable to all audiences, it has failed in that regard, but for those who are racing fanatics and crave a realistic immersion into the F1 world, F1 2012 is the game for you. The true-to-life gameplay, incredibly accurate rendering of real-world tracks, and exciting multiplayer experience all point to this series’ strengths, worthy of note. However, the mind-numbingly long races, repetitive gameplay, and  lackluster presentation will be unenjoyable for the average gamer.. 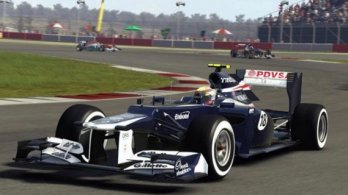 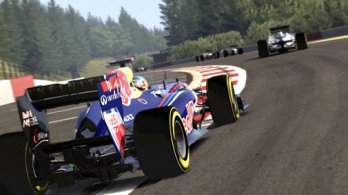 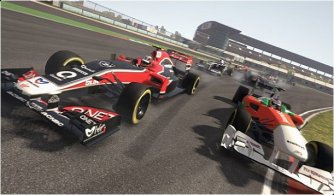 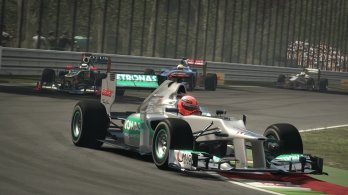