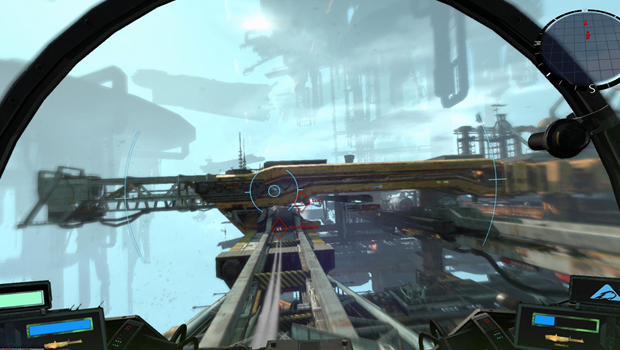 When I first started playing RageQuit’s multiplayer space shooter Strike Vector, I would fly to the edge of the map, park in hover mode, and blast enemies from across the map with my two sniper-precise lasers. Each kill was satisfying, but I felt the game was lacking that special something…

That is, until I discovered that every ship has infinite boost.

In every match after that key discovery, I found myself whizzing at supersonic speeds, firing missiles at every enemy ship that dared to fly past my sights.  My scores were lower (much lower) but I was having a boatload of fun, even though I never finished a single match in first place.

First-person flying also made my kill to death ratio drop once I found out it was an option.  Lining up a good shot on an enemy vector while trying to maneuver complex landscapes makes you feel like an ace pilot, even if you keep slamming against walls.

In the game, player experience takes precedence over the urge to be number one.  Strike Vector is all about zooming through mazes of industrial obstacles and chasing down enemy ships.  Any match that ended with me getting a couple of exciting kills was a successful one, regardless of my score.

The environments you’ll do battle in are gorgeous and varied.  One minute you’re fighting over an open space station, the next you’re in n underground slum, whooshing between skyscrapers.  However, the draw distance seems somewhat short for a game that involves sniping and such high speeds; fog obscures the mechanical landscapes of Strike Vector.

There are hundreds of different combinations of power-ups, weapons, and sub-weapons in Strike Vector.  The eight weapons are, for the most part, balanced — though I did find myself dying to homing missiles a little bit more than anything else.  Figuring out your own play style and the combination of parts to fit that style is a large part of the game.

The learning curve is quite steep.  The extremely limited tutorial, which plays out more like a PowerPoint presentation, doesn’t really teach you what you need to know to survive the relentless world of Strike Vector.  Players batted me out of the sky almost instantly many times.  Often the player at the top of the scoreboard had dozens more kills than anyone else.  The game’s learning curve basically tortures the less disciplined player.

RageQuit includes an experience system which unlocks decals for your ship as well as the usual collectibles like concept art.  The rewards are uncompelling, but as usual, it is nice to see an experience bar fill up each time you complete a match.  Also, the developers promise to release all future DLC for free when each installment comes out.

Strike Vector is a game with great ideas, and really breathes some life into a dying genre. The game’s challenge may be a bit too much for casual players, but if you’re looking to scratch that aerial shooter itch with a frantic edge, then take to the skies -- but don’t expect to live long.