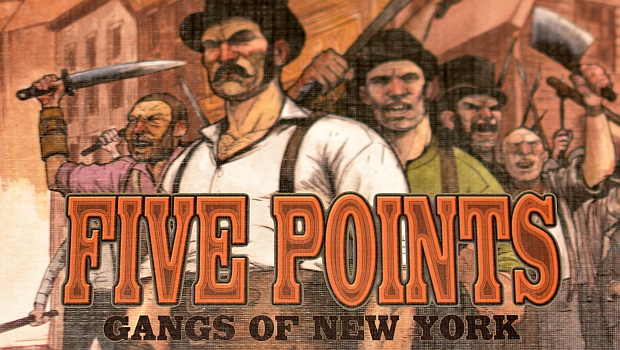 The theme of Five Points: Gangs of New York appeals to people like me who are interested in American history. If you watched the Scorsese film, “Gangs of New York,” you got a Hollywood-rendition of the setting and the color of its characters. Five Points was a real place in lower Manhattan during the mid-19th Century where ethnic groups collided and fought for control. It was also a slum where people lived like animals, struggling to survive in an oppressive environment of corruption and filth, and with no recourse to the law.

Unfortunately, Five Points does very little to recapture those grave and dramatic thematic elements. Tiny colored wood squares are referred to as “rabble” and the slightly larger wooden restroom-icon cutouts are “bosses.” The most attention to the theme is delivered using the building tiles, featuring iconic establishments including Tammany Hall. The box art piques interest but the tiles and cardstock are underwhelming. The plastic tray is unequal to the task of organizing the dozens of cardboard tiles and wood squares. Instructions are thorough and succinct.

I was hoping this game would closely resemble City of Remnants, which has a similar goal of increasing renown/control through influence, but offers significantly more options to players, including combat, which is a disappointing omission from Five Points. Billed as “A Game of Very Raw Politics,” Five Points appears to lack any of the tense political gamesmanship of Diplomacy or Game of Thrones. I guess the claim is backed up through use of “elections”, which is no more complicated than having more little rabble squares plus manipulation tile effects at the end of a round. When you boil away the loose thematic elements, Five Points is all about managing an economy. Whether or not you like that kind of game will predict how likely you are to enjoy playing this game.

Here’s how it works: The game board is assembled using tiles, the only restrictions being no islands and no sinkholes. As long as players agree, the tiles can be arranged in any number of configurations. The sole game dynamic impacted by the board layout is the collection of “control markers.” The board tiles are color coded, representing warehouses, pubs, markets and factories. There are eight control markers for each neighborhood, and one of the ways to end the game is for all the control markers of any color to be collected. Control markers do not add strategic value to the game but are worth victory points. The lame way to win is to have the most VPs. The other way to win is by controlling neighborhoods, winning elections and placing your fifth boss on the board before the other players. This is where the game’s economy comes into play.

Rabble are essentially currency. Each player starts out with enough to get started, taking turns placing rabble in the neighborhoods. Rabble are replenished by passing on your placement turn. The Five Points Mission building also generates rabble, and participating in elections removes rabble from the board back into your supply. Rabble can also be used to bid on manipulation tiles, which are used to influence elections, create new buildings or score more victory points.

Elections occur at the end of every round once all players have completed placement of rabble and have passed. Only one or two elections occur each turn, in the neighborhoods where the most rabble have been placed. Winning elections is a simple matter of addition. Having the highest total of rabble in a neighborhood plus building and manipulation tile effects wins an election and allows that player to place a boss in that neighborhood. Bosses have no other game effect. That’s all there is to it. Strategy is about managing your economy and anticipating where elections will occur in subsequent turns. When you choose to pass affects your pool of rabble for the next round. One or two extra rabble can make or break an election and win or lose the game.

Five Points has a solid core and had the potential to be a good game if there was more to it. It can be played quickly unless you have a player or two who insist on crunching the math every turn. I believe it would fit nicely into long gaming sessions as low-intensity filler.