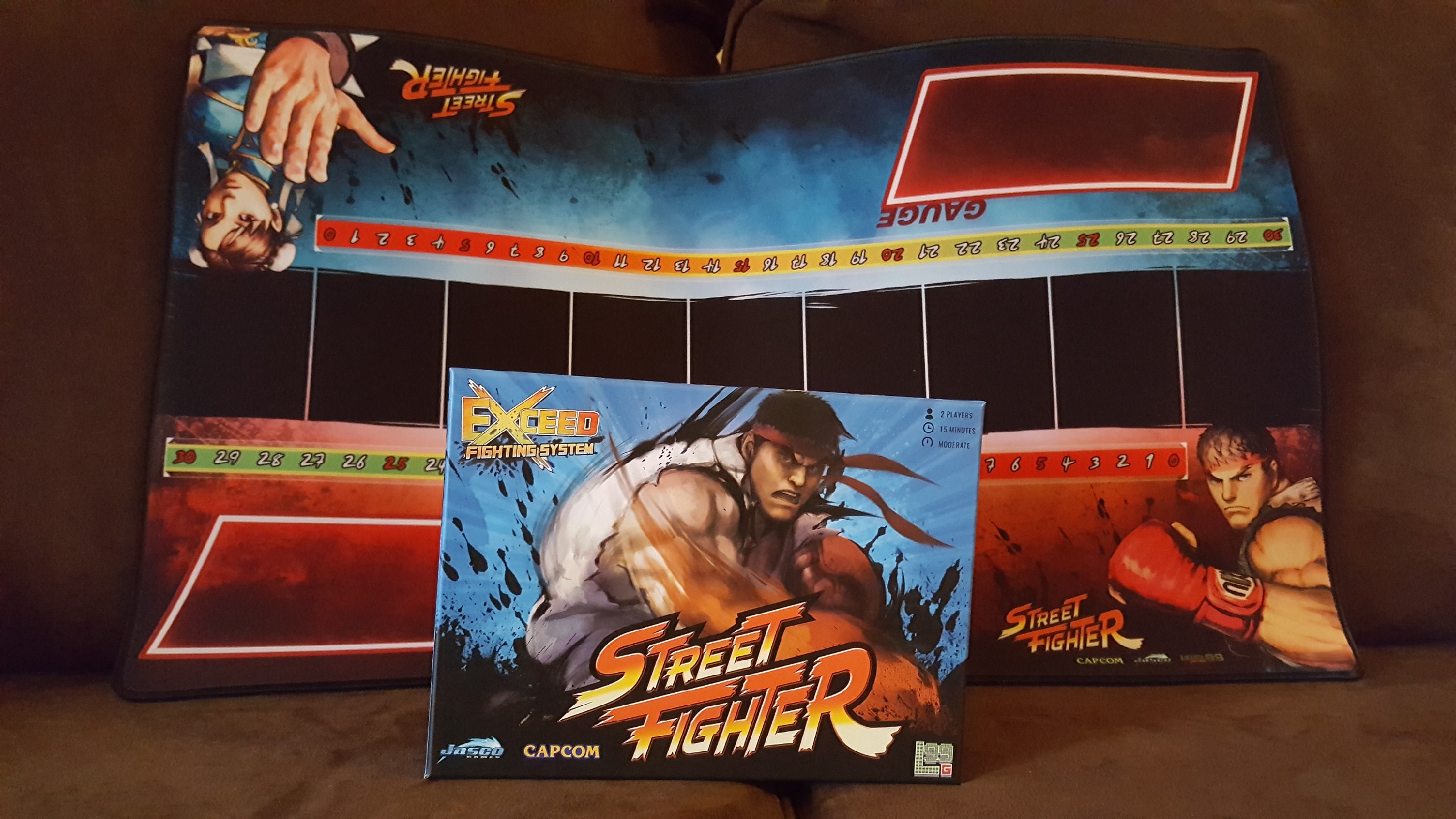 Street Fighter has been an incredibly popular series over the past two decades. From arcade cabinets to home consoles, the series has been available for gamers to enjoy in various forms. Now, with the creation of Exceed Street Fighter, fans of the series can do battle in card form as well.

Exceed Street Fighter comes in a few different box sets, but the one that I got was the Ryu set. The Ryu set comes with Ryu, Akuma, Zangief, and Sagat. Each character has their own deck with cards that are based on their fighting styles from the game. For example, Zangief has stronger close range attacks, while Ryu has a good balance of close and long range attacks.

Each fighter’s deck is comprised of generic attack cards, special attack cards, and ultimate attack cards. Every fighter has the same generic attacks available in their decks, which makes sense. These include moves such as spike, sweep, and grapple. Special attacks tend to be better and vary between fighters. For example, Ryu has moves like Hadouken and Donkey Kick, while Sagat has moves like Tiger Knee and Tiger Shot. The same concept applies for ultimate moves. 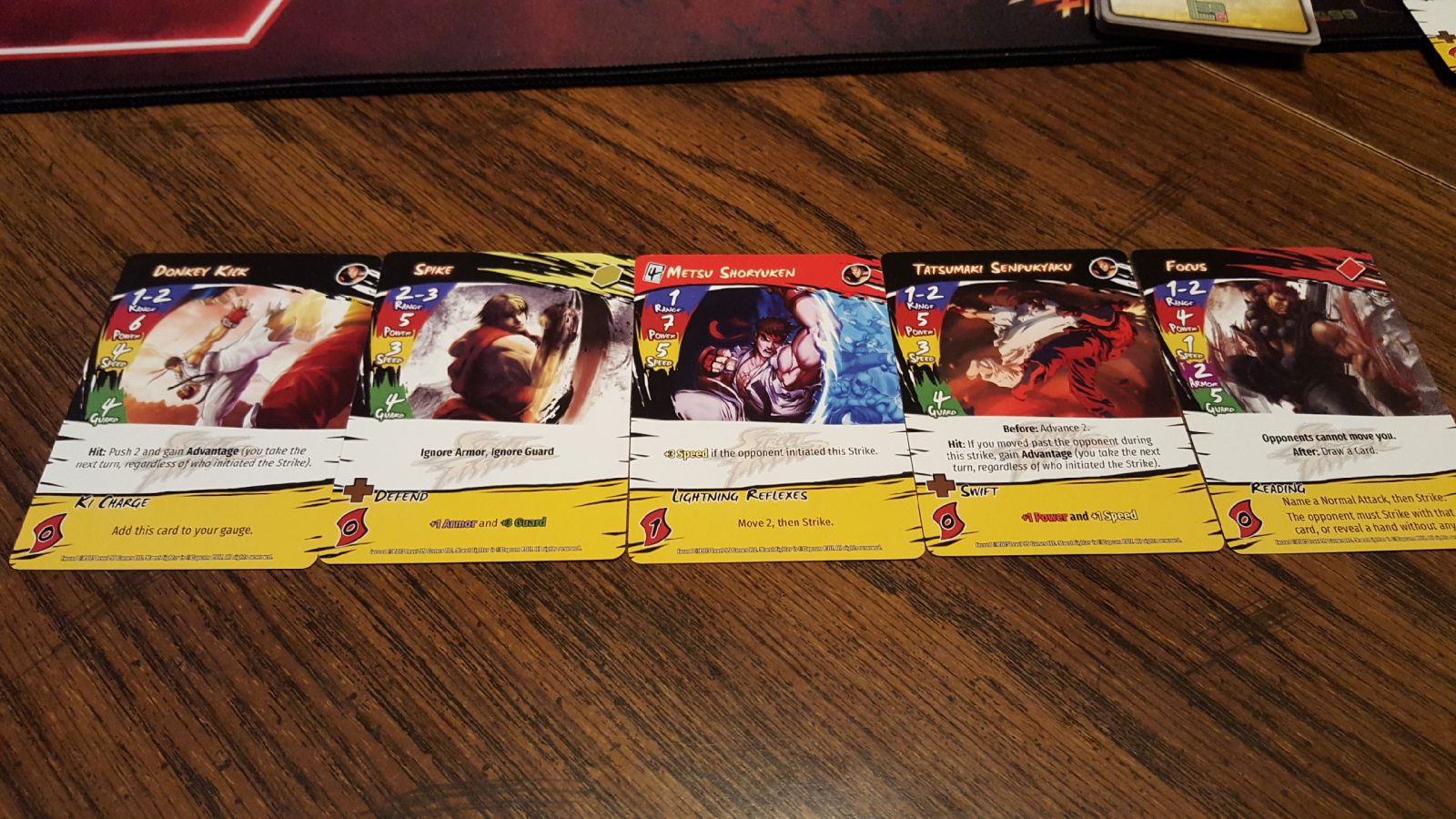 The game starts with players setting up the game area and placing their chosen fighters in the third and seventh card slots. This is meant to represent the starting locations of fighters in the video game. I appreciate the thought behind trying to mimic the video game as much as possible. Both players set markers to keep track of their 30 health points and then draw five cards for their starting hand. During their turn, a player can only perform one action. This action can be drawing a card, activating exceed, moving their fighter, boosting their fighter, or striking.

Unlike most card games, Exceed Street Fighter doesn’t have you draw a card to start your turn. If you want to draw a card at the start of your turn, that takes the place of your action for that turn. This concept is very annoying, as it severely limits what you can do during the turn; if you’re lacking cards and want to add to your hand, you must sacrifice being able to do anything else that turn. If you could draw like normal and then perform an action, that would make the game much better. You can also activate exceed by discarding two cards from your gauge (More on the gauge later). Exceed has you flip your fighter card over to reveal their upgraded effect. Each fighter has their own effect, but exceed improves upon that. If you want to move your fighter, you must discard cards from your hand equal to the amount of spaces you want to move. This really sucks because you are forced to sacrifice cards in order to move closer to or farther from your opponent. Boosting your fighter is done by activating the boost effect of a card from your hand. Some cards have a force cost that you can pay in order to activate them, but others cost nothing. If the card has a plus symbol, then it’s a continuous effect.

Striking is when you choose to attack your opponent. First, one player declares an attack and then places their chosen attack card face-down. The defender chooses a card of their own and does the same. Both players reveal their cards at the same time and the battle plays out based on the attack stats. Whoever played the card with the highest speed stat gets to strike first. You also must check the range of the attack in order to make sure it will actually hit the opponent as well. The power of that attack is the damage done to the opponent, minus any armor the opponent’s played card may have. If the first attack’s power is higher than the second attack’s guard, then the second player is stunned and is unable to carry out their attack that turn. For example, if Zangief does eight damage, but Ryu’s move only has a guard of five, then Ryu takes eight damage and his move gets cancelled out. I like the idea of this representing a guard break, but it can be quite frustrating if your opponent can keep pulling off moves that activate before yours and stun you repeatedly. Any successful attack cards are placed into the gauge section. The gauge can be used to activate exceed (as mentioned earlier) or to perform ultimate attacks from your hand. Once again, the dedication to following the video game’s format is great, but setting up for these opportunities can be tedious. The match ends when one player has their health dropped to zero, just as in the video game. 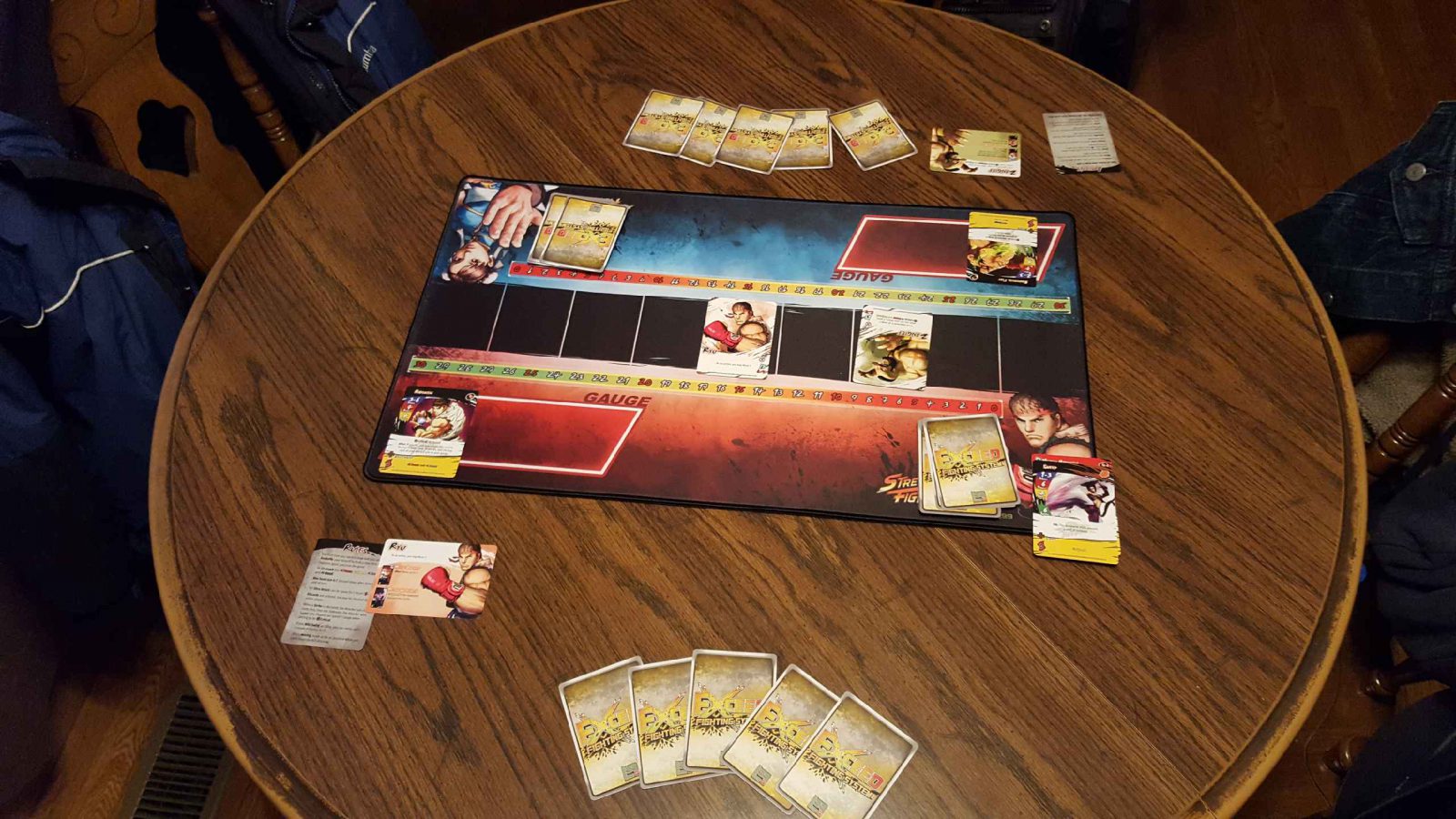 In addition to damage, attack cards may also have effects that go along with them. Some take effect before the attack activates, while others occur after the damage is done. For example, a card may let you move forward three spaces before you attack, while a different one forces the opponent to discard a card if they took damage. The effects add another layer of complexity at times, which can be equal parts interesting and annoying to deal with.

The art style and card design of Exceed Street Fighter is pretty nice and it definitely captures the feel of the series. The characters look like they should and I like the inclusion of other characters such as Ken and Juri for the generic cards. The gameplay on the other hand is a different story. I do appreciate what they were going for in their attempt to translate the video game combat into a card game format, but choices were made that suck the fun out of things. The lack of a normal draw step and the need to discard cards for almost every action force you to limit your actions per turn and result in you not doing much. Sure, there were plenty of options to choose from during your turn, but being restricted to only one of them really slowed things down. I think if a few changes were made to the action economy and flow of the game, then it could have the potential to be so much better. It also doesn’t help that some aspects of the game weren’t explicitly laid out in the rules. My friend and I had some questions, so we looked through the rulebook; for several things, we basically had to make our own assumptions based on what we could find. That being said, Exceed Street Fighter isn’t terrible, but there are a fair amount of aspects that I think should be changed or adjusted. It feels like it had some potential, but got bogged down by limitations and its action economy.

Exceed Street Fighter tries to mimic the combat from the video game, but it doesn't translate well to a card game format. The art design is nice and characters look like they should. The action economy feels very limited and the flow of the game feels bogged down.

Codi loves to play video games and watch movies. He will watch almost any kind of movie just to experience them. His ideas take inspiration from the shows and movies he watches, and games he plays. He also loves a good pun.
Related Articles: Exceed Street Fighter, Tabletop
Share
Tweet
Share
Submit