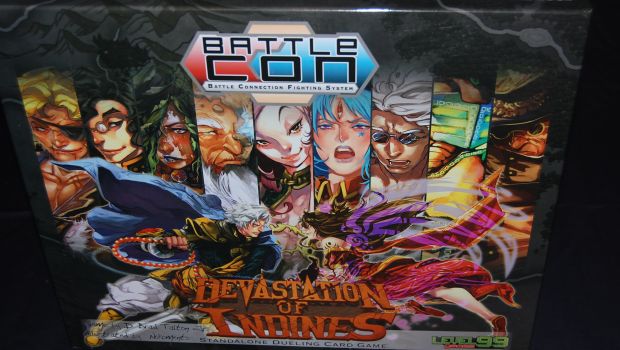 I have been a fan of fighting games since the token-eating machine Street Fighter II was released. I remember looking at strategy guides and trying to memorize the character moves. Fortunately I would be able to go into the arcade at a time when I could play against the AI and not constantly lose to a human opponent. With so many fighting games released, I wondered why there weren’t more board games trying to emulate the fighting genre. Sure there is Yomi, but it never quite clicked with me. Recently BattleCON: Devastation of Indines arrived and I was able take it for a whirl.

When I picked up the box, I was shocked at how heavy it was. However, seeing all the components inside made it clear that there was a reason for the heft.

If you have played any fighting game, then you have the general idea of BattleCON. You choose a character to fight against another character. Each character has their own special abilities and plays differently from each other. You fight against each other on a board with seven spaces in a straight line, staring out one space from each end. A life counter is used to keep track of how many life points each player has, and the character with the most life points at the end of the round, or the one who hasn’t been knocked out, is the winner. A round can take 20-30 minutes when you are first learning the game, but if you are an experienced player, that time can go down significantly.

At the heart of the game is the BattleCON system, and it is ingenious. Each player lays down an attack that consists of range, power, and priority. Range and power are self-explanatory, and the player with the highest priority determines who goes first during that turn.

The way these attacks are laid out makes the BattleCON system so unique. Each attack uses two cards, one on the right and one on the left. The right side uses six Bases with blue backs that are common to both players. They include grasp, drive, strike, burst, shot, and dash. Each character has their own unique base as well. The left side, or the Style, has red backs and is representative of the training each character has had and what makes each one different. When the two cards are put together the range, power, and priority are added together.

These cards can have triggers on them to follow. Some items occur before the start of the turn or before the player’s turn starts. Others occur when you cause damage to another player or at the end of the turn. These usually moving your character or even your opponent, but can have other effects as well.

Once the triggers are resolved, the Active Player checks to see if the opponent is in range. If so, then the attack occurs, and damage dealt to the Reactive Player is equal to the power of the attack. Some players can soak up damage each turn which lowers the amount of life lost. If the attack does cause damage, then the character is stunned and can’t counter attack. If the Reactive Player is not stunned, then he can go through with his attack. The attack pair is then recycled. Two pairs are on the game board and the one furthest to the left goes back into the player’s hand. The other two cards are slid over and the most recently used cards of the attack pair is laid down next to that pair. It will take at least two turns before you can use either card in the most recently used attack pair. Play continues until one player has no life points remaining or fifteen turns have been taken and the player with the most life points at that time wins.

If this system sounds complicated, don’t worry. Everything is very intuitive, with the triggers written well enough that you can understand them right away. The card graphics are laid out so you won’t try to match up two Bases or two Styles. You might have to take a little extra time the first couple of rounds that you play, but once you get the hang of it, you’ll be laying down attacks with ease.

Devastation of Indines includes 30 different characters for you to play as. While you might think that this might make it confusing on which character to take, each one has a suggested level of experience. Some are aimed for beginners, while others are aimed for advanced players. The cards are separated into five different waves. They suggest that you play with the six characters in Wave 1 until you are comfortable with them. Then move on to Wave 2. Then repeat the process until Wave 5.

With thirty different characters, you might think that there is already plenty of replayability. However, Level 99 Games has added three different base sets that play differently from the original base set. These add more strategy to the game, and are introduced in later waves. Not only that, but Arena cards are available that make slight changes to the game. They also have a condition when met causes the arena to change. If you’ve ever played the Dead or Alive series, then you know what it is like to have a change of scenery in the middle of a round.

Playing mano-a-mano against one other player is great, but if there are three or four of you that want to play, you can still all play together instead of playing two separate games at the same time. Rules for a tag-team duel and a duel with two teams of two on the board all at the same time. If one player has significantly more experience than the other players, then playing a boss match can help to even up the odds.

If you are playing by yourself or you want a cooperative experience, then the BattleQUEST Dungeon is at your disposal. While some of the mechanics change slightly, this has a feel of an old-school dungeon where you encounter enemies and use your abilities to defeat them.

Each character has their own cardboard character punchout, and it is facing a specific direction, which is important during the game. The board has spots to represent where the characters are, spots to put the recycled cards, and the phases of each turn. The cardstock of the cards is solid and should be able to handle multiple plays.

Each character has their own specific holder that holds their individual base and styles, so you don’t need to create any system yourself to hold the cards. It also lists whatever other tokens that character uses. However, most characters have their own individual tokens. I tried to put the tokens in the holder as well, but they just ended up falling out inside the box and stretched the holder. I would suggest using plastic zipper bags to keep the cards and tokens for each player together. While the tray is useful for holding all the cards when everything is unopened, there isn’t a good way to organize the box contents together after everything is unpunched.

When I introduced this game to others, I was met with some skepticism. However, everyone who tried it understood the mechanics quickly after a couple of turns. Not only that, but they wanted to try another round with a different character immediately. I was more than happy to oblige myself. When this happens, I know I’m playing a great game.

Fighting video games generally have a higher learning curve than other games because you need to learn the special moves of the different characters, not to mention the nimble hand-eye coordination to pull off said moves. BattleCON: Devastation of Indines lets anyone get into the action and has enough variants to allow players of different skill to compete with each other. This game is not only a great board game, but is better than most of the fighting video games out there. If you have any interest in any type of fighting game, I can’t recommend BattleCON: Devastation of Indines highly enough.