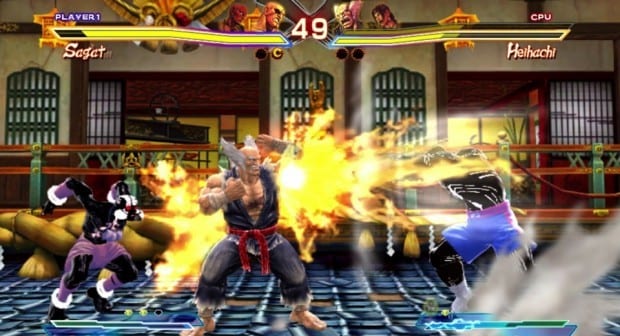 While I wasn’t sure of the original cross over game, Street Fighter X Tekken game was a largely enjoyable experience. However, it shouldn’t be surprising with all of the crossover games Capcom has done. When I heard that there would be a Vita version that would enable a large set of features that would integrate with the PS3, I thought it would be a great way to see how well the two could work together.

First of all, the Vita version of SFxT comes with 12 new DLC characters and 38 alternate costumes. That increases the roster on both sides of the two franchises by six. The alternate costumes are nice to have, but they aren’t anything that enhances the experience significantly. If you have the PS3 version of SFxT, then the code will also add those characters on your PS3 as well.

[singlepic id=9107 w=320 h=240 float=left]You can also play SFxT using the Vita as your controller instead of the DualShock 3. The L2 and R2 buttons show up on the touch screen if you want to use them. Four squares also show up on the screen that perform different combo moves, and other combos can be done by tapping the left or right side of the rear touchscreen. Unless you practice this way you are better off using the actual face buttons, but it’s fun to try a couple of games using this method. The touchscreen method can be disabled in the options. While you lose two of the trigger buttons on the Vita and the face buttons are smaller than the DualShock 3, the controls are solid. While some kind of fight stick is preferable, that isn’t an option with the portable version. The buttons can be difficult to press at times, especially since you can’t map a button to do all punch buttons or kick buttons without losing some functionality. The configuration of the buttons does make this difficult since you need to either hit Cross, Circle, and R or Square, Triangle, and L at the same time for some of the special moves.

It is a bit strange switching between the characters of the two series. The Street Fighter characters are full of quarter- and half-circle movements, as well as the Z move. The Tekken characters use each face button as a different limb. Special moves seem to be more about successful attack button presses. However, it does make it easier for Tekken fans to play the game with their favorite characters.

The graphic quality of the Vita version is very similar to the PS3 version. The only difference I noticed between the PS3 and Vita version are the flames that shoot out from the top health bar display and some of the lighting and particle effects during attacks. While I don’t understand why the Vita wouldn’t be able to handle this, it really doesn’t take away from the experience that much.

My feelings about Street Fighter X Tekken have remained largely the same. You can read my PS3 review to get an idea for the general basics. The Cross Gauge, Gem System, and juggling are still there, and they add an extra layer of depth to the game. I do feel that a few characters have been balanced a bit better, but it might be that I just have more experience with the game now.

[singlepic id=9105 w=320 h=240 float=right]Playing online has improved, and Vita players can play against others on the Vita or the PS3. However, don’t expect to get a break fighting online. If you haven’t played this game before, get familiar with the characters in the Training and Arcade modes. Otherwise, you will get beat up and thrown down in a tidal wave of combos. A few new modes have been added. The Burst Kumite mode has you fighting continuous matches against the CPU. If you play against someone online, their profile with their characters and fighting style is saved and used in the Burst Kumite mode as well. It’s nothing we haven’t seen before, but it does add a new mode to the game.

Another new mode is the AR mode where you point the Vita camera to a background. Then you can add any unlocked character to the screen where they can perform moves you choose. If you like what you see, you can even take a picture of it. It isn’t something that will be used often, but it’s kind of funny to see Ryu performing kicks on your desk.

The fighting community has practically disowned Street Fighter X Tekken, something not seen in a Capcom game before. If you are looking for something to have some fun with some friends instead of worry about hit boxes, then you are probably in for a good time. The integration with the PS3 version is a nice feature to utilize, but you won’t notice many differences while playing on the small screen. I would recommend getting it if you need one for your Vita collection and have some familiarity with both franchises, or if you want to get the extra DLC characters for both Vita and PS3 versions.