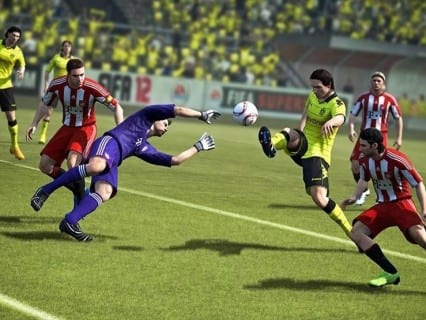 FIFA Soccer is back and looking better than ever in FIFA Soccer 13. The game follows in the footsteps of FIFA 12, which revitalized the series, and the Player Impact Engine returns: this time with far fewer pitfalls. Anyone familiar with FIFA 12 will find that FIFA 13 doesn’t stray too far from its predecessor in terms of gameplay, but the title is better in just about every area.

The graphics in FIFA 13 are great. Soccer pros glide across the field in beautiful formations, and parade with joy at each new goal. The instant replay functionality really gives one the opportunity to see the true power behind the engine. Players are given complete control of the camera and can pour salt in their opponent’s wounds via a slow motion replay of their victory. The close-ups on the players’ faces aren’t terribly great, but you’ll rarely be inspecting players at this proximity. There is also the occasional silly animation, as the impact engine sends your player twisting and turning over another player with just a single nudge. Overall, the instances where the game ever stands out as being visually sub-par are rare. The game lends itself to pleasant, topographical scenes, and does so effectively as large groups of players all move about the pitch at once without the tiniest graphical shortfall.

FIFA 13 controls well, but there’s a bit of a learning curve to be overcome. Players new to the series will have trouble getting the hang of things initially (even with help from the equally difficult tutorial), but after a few losses you’ll get the hang of things. This is because the controls for FIFA 13 are incredibly deep, more so than I cared to venture, but the basics can be learned without the necessity for learning everything (and those controls are available to pros who want every option available for them to command).

The gameplay in FIFA 13 has been tweaked in a few noticable ways, the most important of which is dribbling. This time around players have the ability to make the ball dance beneath them as they outsmart their opponents. However, toutsmarting the AI is no easy task, as your opponents swarm around you, work together to stop your progress, and annoy you with their persistence. These improvements come alongside an improved physics system to create a frantic race for control over the field.

In career mode, you get the full experience of playing for or managing a soccer club of your own. While this provides a fresh aspect to the game, it also provides some new annoyances. In this mode you’re tasked with dealing with all of the everyday challenges of being involved with an actual soccer club. As a player, your manager won’t play you if you have a lousy game, you’ll have to negotiate your wages, sign contracts with clubs, and take time off to heal from your injuries. As a manager, you’ll have to sign contracts, negotiate trades, deal with whiny players, and ask the board for more money. This is where FIFA 13 becomes a truly precise soccer simulator. Unfortunately, it’s also where it can become a huge pain. I spent more than an hour in the menu without playing a single game at one point, just because my manager had other priorities. Then I played a single game, did poorly, and got sold to another team before doing it all over again. As a manager, I could play soccer whenever I wanted (by directly controlling the whole team), but the politics involved in between matches were so time-consuming that it gave me a headache. I’m not saying that the career mode isn’t good; it is. I’m saying that you should stick to other modes of play unless you have patience and a deep understanding of soccer. I have neither, hence the hilarious disaster that was my player’s career.

The game is packed with other game modes that add varied gameplay and challenges including the all-new skill games mode wherein players’ skills are put to the test via a collection of (very tough) challenges. One could easily go a few days exploring and enjoying all that this game has to offer.

FIFA 13’s multiplayer is where the real challenge comes in. Featuring support for up to 22 simultaneous players (21 of which were all 800% better than I) the game is refreshed with an experience that will no doubt bring long-lasting joy and challenge to fans (while leaving people like me in the dust). The technology works as well as you’d expect, and you could easily pass the hours online this way.

The game’s soundtrack is much larger in this installation and packed with music from around the world. The music will become repetitive if you spend multiple hours in the menu (like I did during my disastrous run as a manager), but manages to stay fresh otherwise. Songs you aren’t fond of can be skipped or cut out of the soundtrack entirely in the settings. During matches the announcing and crowd’s cheering is a pleasure to hear, as it enhanced some already frantic moments of gameplay. After a while however, the segments of announcer dialogue became a bit repetitive, but it didn’t really bother me.

EA Sports did a great job of incorporating the Kinect in the 360 version of the game. The Kinect responds to anything you shout during play (and yes, you will be shouting) in interesting and unusual ways. If you shout “shoot” to another player on your team, the Kinect will pick up on that and act as if your player had shouted that. Sometimes your player will even take your advice. I also got in trouble with my manager for shouting dirty golf words after I was needlessly given a yellow card during a match. For better or for worse, both of these experiences were really cool.

FIFA 13 managed to do what I thought impossible: it made me care about soccer. While FIFA 13 doesn’t revolutionize the franchise like FIFA 12, it does improve upon its predecessor in many small ways. The game’s matches are exciting, occasionally challenging, and reward success with a huge payoff. FIFA 13 allows players to immerse themselves in the world of professional soccer by letting them work their way through career mode, taking on the challenges offered by the skill games, and engaging in endless multiplayer matches. FIFA 13 is an experience that soccer fans won’t want to miss.