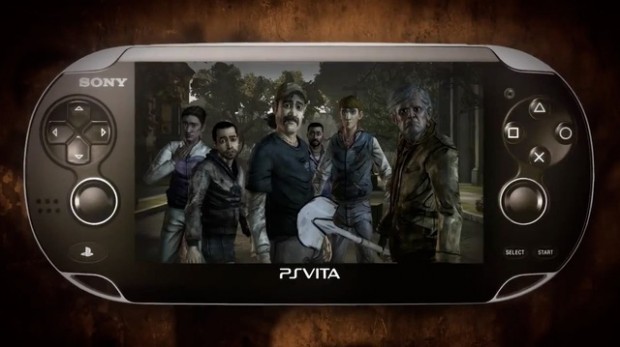 One of the most unexpectedly impressive titles in gaming history, Telltale Games’ episodic adventure series The Walking Dead won the acclaim of fans and critics alike in 2012. It earned numerous Game of the Year awards across major publications (including our own), and is often credited with revitalizing an entire genre that has laid relatively dormant for the previous decade. On the heels of such incredible success have come releases on additional platforms, the latest of which being the PlayStation Vita. The transition to this particular platform brings with it some drawbacks, but the same excellent game is front and center, enhanced by the Vita’s touch interface.

Based on Robert Kirkman’s popular comic book series, The Walking Dead puts you in control of protagonist Lee Everett, an apparent convict being transported to prison en route out of Atlanta, Georgia. After a car accident kills the driver and leaves Lee injured, he finds himself facing a new threat in the form of a zombie outbreak. Attempting to make quick sense of it all, he soon meets the young Clementine, a girl whose parents were away on a trip when the outbreak occurred. Lee accepts the role of protector and takes Clementine under his wing as they journey forward to face the challenges ahead.

[singlepic id=15716 w=320 h=240 float=left]At a glance, it’s easy to mistake the hand-drawn, cartoonish art style as foreshadowing a light-hearted tone for the game’s content. But get ankle deep in this adventure and you’ll soon learn that this title carries some significant weight in its branching storyline. You’ll be required to make many tough decisions and may often find yourself second-guessing them soon afterwards. This is largely due to the game’s success in exploiting the moral grey area; there typically isn’t a clear “good” or “bad” choice to go with. Consequences are everywhere.

Apart from the complete five-episode set of The Walking Dead Season 1, the PlayStation Vita version includes 400 Days, transitional DLC that serves to lead into the inevitable Season 2. After the tense and heart-wrenching experiences of Lee Everett and his companions over the first season, 400 Days introduces five new characters, each with his or her own episode that serves to flesh out their backstory. The five have unique experiences in parallel with one another with even more cringe-worthy decisions required therein. At the culmination of their respective episodes, they are all destined for the same camp and are confronted with a final decision. It is clear at that moment that the choices you’ve made with each of the characters will have a lasting effect going forward, in keeping with the spirit of the original episodes. 400 Days serves its purpose well as a precursor to Season 2, as it leaves you readily invested in a series of new personalities, anxious to continue their journeys.

The point-and-click gameplay not only feels right at home on the PlayStation Vita, the touch controls actually enhance the experience. Whereas hunting out a hot spot on the screen with a mouse – or especially a controller – could occasionally feel rather clumsy on other platforms, being able to extend a finger and touch the intended area is much more intuitive and accurate. Similarly, using the touch screen to make conversational choices is a very welcome feature when your time is short. It’s true that the tablet versions of The Walking Dead share this helpful feature, but only on the Vita are you also provided with an analog stick to move around when desired. More than slight enhancements, the Vita’s touch screen and analog stick combine to provide the supreme control scheme for The Walking Dead.

[singlepic id=15715 w=320 h=240 float=right]That said, I would stop short at confidently proclaiming the PlayStation Vita as the paramount platform on which to play this game. While the touch controls feel natural in most situations, Telltale did manage to shoehorn in several unnecessary swipe prompts in some of the more action-oriented sequences. They certainly do not make the game feel more immersive and amount to tacked-on distractions. Fortunately, they’re rare.

More problematic is the technical performance of The Walking Dead on the Vita. Loading times are noticeably longer when compared to other platforms, and the game suffers from visual and audible stutters directly preceding most action sequences. These disconcerting moments can fleetingly break immersion in some of the more intense moments of the game. Still, they are not debilitating, and no hard freezes or crashes were experienced in my playthrough. And since these issues appear to amount to poor optimization, hope remains that they can be fixed through patching.

Any new platform that plays host to Telltale’s The Walking Dead is a fortunate one. The PlayStation Vita now not only shares access to this excellent game, but its players are able to enjoy it with a superior control scheme over all other platforms. There are trade-offs in the form of occasional distracting swipe prompts and some irritating stuttering, but the consensus 2012 Game of the Year is intact, complete with the 400 Days content in tow. If the technical issues can be ironed out, the Vita version of The Walking Dead could indeed be awarded as the definitive one. But even in its current state, this version of the lauded title can stand proudly beside the rest.