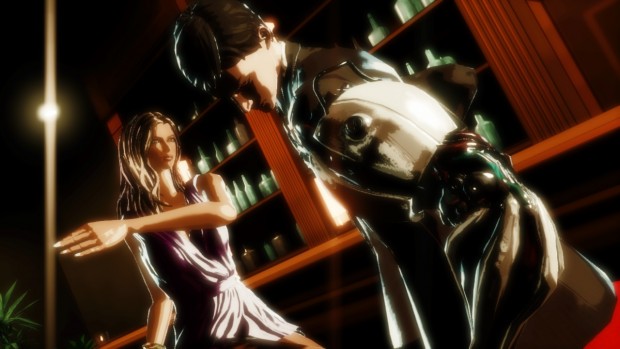 Killer Is Dead is probably the first game I’ve played that’s made me feel like a pervert.

There are thousands of games out there that objectify women, that feature absurdly revealing outfits and countless examples of the “damsel in distress.” And there are dozens of others that let you woo individual characters under the hypnotic gaze of your sexual prowess. But none have left me as wide-eyed, mouth-agape, “holy crap, I can’t believe I’m playing this” sick-to-my-stomach quite like SUDA 51’s latest actioner.

It’s a damn shame, too; the game part is actually pretty good.

[singlepic id=15717 w=320 h=240 float=left]Fans of SUDA 51’s previous work will find a lot of similarities to games like Killer 7 or No More Heroes. Once again, you’re an ultra-powerful, bad ass assassin — this time, a super classy gentleman by the name of Mondo Zappa. As the arm of a clandestine, government-sponsored hit-squad, it’s up to you to take on contracts and save this cyberpunk future version of Earth from the evil that has begun to infest society. This is a world where bionics and moon travel are as commonplace as fast food — and it’s the moon that becomes a central focal point on this hyperviolent world of death and intrigue, looming over the proceedings as a harbinger of impending doom.

All of this is portrayed in a slick graphical style reminiscent of the aforementioned Killer 7. The cel-shaded graphics and stark shadows pop, while the metallic sheen gives the characters and environments a truly otherworldly feel to them. It’s an oddly compelling look that uses its style to hide simplistic textures and other imperfections — as if the blemishes were part of the overall experience.

As is par for the course for most of SUDA 51’s games, the plot is largely nonsensical, trading things like exposition and character development for over-the-top and cartoonish displays of blood letting and increasingly unrealistic scenarios. One minute you’ll be wandering through a Japanese peace garden, looking for an old samurai-warrior-turned-giant-tiger, and the next you’ll be running through a military base, hunting down a skyscraper-sized beast named Giant Head. The brief moments you do get a glimmer of narrative are waylaid by impenetrable dialog and bizarre imagery. But none of it really matters — even Mondo is aware he’s in a video game, and does everything he can to move things forward to the next action sequence as quickly as possible.

[singlepic id=15718 w=320 h=240 float=right]Speaking of action, the combat in Killer Is Dead is probably the best thing it has going for it. Favoring simplistic button mashing over overly complex combos, you’d think it would get old quickly — but through a few subtle design choices, each combat scenario is thrilling and highly entertaining. You’ll want to use your katana most of the time, meaning you’ll spend about 90% of any given fight hammering away on a single button. Defensive playing pays off too — dodging at the right moment turns the screen monochrome and slows time to a crawl, allowing you to deliver an unblockable series of lightning-quick slashes to your foes, with crimson geysers lighting up the screen.

Killer Is Dead constantly throws you feedback on how well you’re doing, whether it’s a frame-by-frame silhouette of your final slash, or a slow-motion zoom-in on a well placed headshot. Enemies also drop a flood of experience with every kill, which upgrades your health and Blood (read: special ability) meter in small, but frequent increments. Couple that with a fairly extensive list of interesting and useful abilities — including a block breaker and several upgrades for your arm cannon — and combat in Killer Is Dead becomes something to relish, rather than avoid.

In between missions, you can pursue various side quests. Most of them are variations on the levels presented to you in the story — get through this area under a time limit, kill these bad guys with a turret, that sort of thing. It’s all pretty standard fare, and does a great job of providing more content within the framework of the simplistic but rewarding combat mechanics.

And then there’s the creepy dating game.

[singlepic id=15719 w=320 h=240 float=left]See, in addition to being a fairly apt killer, he’s also a casanova, and this is shown through a series of missions in which you try to win the hearts of several women around the world. You do this through a minigame that has you, in first-person mode, staring at your date like a creeper to “increase the mood.” Then, once their gaze is averted, you then glance down at any and all exposed flesh — cleavage, legs, crotch, whatever — in order to build your guts meter. Once that’s full, you can present them with a gift. Give them enough gifts and you go off to “seal the deal.” The better you do, the more… “detailed” your rewarding cutscene ends up being.

I’m going to come right out and say it — it’s disgusting.

Is it supposed to be funny? I guess it is, in that sort of juvenile straight-to-DVD Porky’s rip-off kind of way. Is it supposed to be sexy? Possibly, if you’re thirteen, and the only experience you’ve had with sex is through late-night cable softcore pornography — and you’re also into digital representations of the female body. The women in Killer Is Dead are already one-dimensional enough — these, however, are women as literal objects. They think you’re the studliest dude in the world, they love all your gifts (even if they don’t like some as much as others), and as long as you don’t stare at them when they’re looking, you’ll end up getting the girl.

[singlepic id=15720 w=320 h=240 float=right]I keep trying to separate the rest of the gameplay from this one minigame, but it’s such a vital part of the experience. Yes, it’s optional, but it’s also the only way to unlock Mondo’s other gun arm attachments. The whole thing just rubbed me the wrong way, and that experience stuck with me throughout the eight or so hours it took to beat the game.

I’ll put it another way: the trophy data for getting the highest ranking on a date states that you’ve made your sexual target your “prisoner in body and soul.”

Killer Is Dead is a competent, and oftentimes superb, action title that is held back by an overly obtuse plot and a dating minigame that did more to turn me off from the game entirely. Game mechanics don’t exist in a vacuum, and I can’t write off one part of a game’s design that seems so vital to the entire experience. It’s uncomfortable, it’s unnecessary, and it’s unfortunate, because it sullies an otherwise entertaining game.