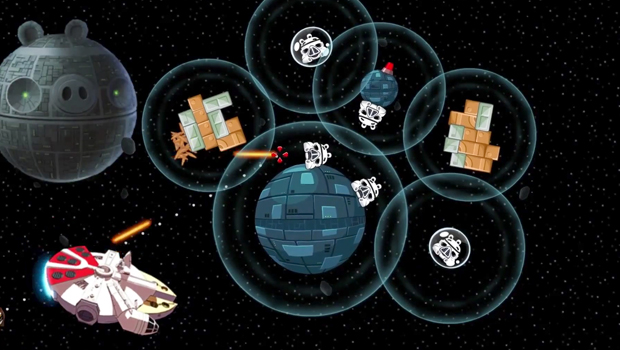 If you’ve been living under a rock, Angry Birds is arguably the series that tore the gaming world wide-open to casual players.  It’s easy to learn and satisfying in a very direct way.  You throw birds, kill pigs, and earn stars.  As you earn stars you unlock new levels.  This simple formula has earned the series spin-offs upon spin-offs, the most recent of which is Angry Birds Star Wars.  Can two of the most overused brands of all time coming together spell any good for either series?

As far as gameplay goes, don’t expect the formula to change. There are a few Star Wars themed gameplay elements that add a little variety to the stagnant gameplay.  Obi Wan Kenobi uses the force to push obstacles and enemy pigs with catastrophic force, Luke can use a lightsaber to destroy anything in his way, and a few other cast members make appearances as well.  Without these small additions, the game could just be called “Angry Birds Space.” Oh wait, they already did that.  Overall the mechanics work well and I never found myself blaming poor physics for my lack of fun.

With the PS4, players can use the Dualshock 4’s touchpad to control the slingshot’s trajectory, but it’s extremely finicky and I stuck to using the analog stick for the entirety of my playtime.

Occasionally you’ll make that perfect hit that wipes the screen of pigs and feel a small sense of satisfaction, but that feeling is fleeting, and all you’re left with is bland, repetitive gameplay. Occasionally the game would change things up with new, but it never did something that ever warranted the ridiculous 50 dollar pricetag.

The Angry Birds series as a whole lacks nuance, and Angry Birds Star Wars is no different.  It’s all about simple trial and error — not skill.  I had little to no fun playing through the game, and definitely not enough to go back and play through its numerous samey levels to try and get a higher score or unlock the game’s many inane collectibles.  There’s honestly no sense of accomplishment throughout the game. I never felt good at slinging birds; I just coasted along through my entire playthrough, much like the Angry Birds series has over the past several years.

Angry Birds Star Wars is a shameless 50 dollar repackaging of a 99 cent iPhone game. There's little to nothing added in the console release. The only person I can see this appealing to is an Angry Birds fan whose level of obsession gets into the clinically problematic spectrum. Do yourself a favor and either skip this one, or if you absolutely must get your Angry Birds fix, then find a way to play it on iOS.