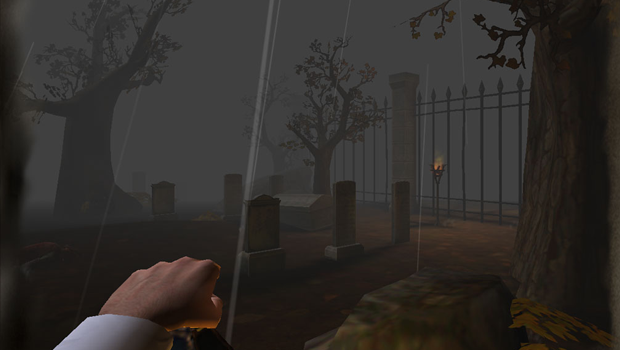 Slender Man rose out of the black abyss that is the Something Awful forums back in 2009.  He has all the trappings of a grade A horror creature: lumberingly tall, blank face, long tentacles, and, perhaps scariest of all, a starched and clean business suit.  The monstrous man’s origins have never been fully explained, and the only thing known about him is that he steals children.

To put this review into perspective, allow me to tell you an embarrassing fact about myself. I’m terrified of all things horror.  I still have nightmares about shows Wikipedia calls “tongue-in-cheek” that I saw 10 years ago.

Every monster needs a good origin story, and Slender Man doesn’t seem to have one that’s set in stone.  Slender Man Origins attempts to give him a dark background that dates back to the year 1702.  I’m not sure where he got such a stylish suit back then, but I suppose that just adds to the mystery BIGZUR lends to the trendsetting beast.  Slender Man has taken some children that the main character seemingly has no attachment to, but regardless he runs off to several haunted locales to hunt down the Slender Man.

The story is thinner than the game’s antagonist, and doesn’t even try to pull the player into the world.  Though the ability to choose what order you play through the levels is novel, it’s that mechanic that breaks down the core of what could be a well told horror narrative. Instead of having an eerie story unfold slowly, the game is forced to maintain the same pace throughout each level.

But not all horror games need a great story, they just need a good atmosphere.  Games like Resident Evil and Amnesia hinge almost exclusively on the air surrounding the player.  Sadly, this is one of the places Slender Man Origins fails most. Wandering, terrified that the Slender Man could be around any corner should be a big part of the game, but instead several cheap scares are employed. Yawn-inducing skulls drop from the ceiling, chairs jitter and shake, and I once saw a statue fall over, clipping through the wall next to it.  Even the surprisingly good sound cues that go along with these scares don’t do enough to save them from the depths of laughability. This all adds up to my scaredy pants tucked away neatly in my closet while I slept soundly after a couple of long play sessions.

Occasionally, you’ll round a corner and there will be the monstrous figure of the Slender Man, and in order to escape, you look away and just start walking.  Well, most of the time–there were many times when I just couldn’t get the character to turn, forcing me stare into the faceless creature until I presumably either died or went insane.

The gameplay is tedious and has almost no sense of urgency.  My time with Slender Man Origins was broken up like this: 10% finding children, 10% running away from Slender Man, and 80% walking around.  With no map or guide at all, there is a lot of time wasted trudging through the maze-like levels.  At times the game felt more like I was touring an abandoned Colonial Williamsburg than running from a terrifying monster.  Slender Man doesn’t seem to want anything to do with the children, he mostly just seems to be hiding around corners to jump out at the player.  Maybe if he had a mouth he’d even scream, “Boo!”

I’m sorry to say that Slender Man Origins feels like a cash-in on the trend that’s swept across the web. Good work went into the 3D environments and sound effects, but Slender Man adds nothing more than a name to the overall boring experience presented by the game’s central mechanics. Even the biggest fans of horror can skip this entry in the long list of Slender Man related media--that is unless they’re also big fans of aimless wandering.