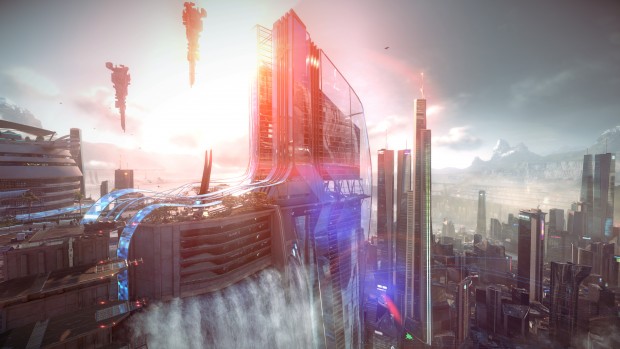 Console launch games are hard to peg, sometimes. They bear the unfair scrutiny of millions of judgmental eyes, all hoping that one of these games will help justify their new, several hundred dollar purchase. Most of them end up falling flat — new IPs with only a year or so to percolate usually fall short of greatness.

Sometimes you see a game that has a fairly impressive pedigree; a sequel to a nearly decade-long franchise, a sequel that not only showcases the power of your fancy new console, but also moves the series forward in a meaningful way.

Killzone: Shadow Fall is not that game.

Killzone: Shadow Fall takes place years after the ISA have decimated the Helghan home planet in Killzone 3. The ISA, being the nice guys that they are, have decided to allow the remaining Helghan refugees to take over half of their planet — effectively displacing half of their own population in doing so. This has created an unstable truce between the ISA and Helghast, carrying echoes of real world situations between current-day Israel and Palestine, or Cold War-era East and West Germany — complete with a massive wall separating the two factions.

You take on the role of Lucas Kellan, a bland everyman who witnesses his father being gunned down at a young age. Shortly after, he decides to join up with the Shadow Marshalls, a clandestine group meant to spy on the Helghan forces.

You’ll move from mission to mission, interact with both sides of the conflict, and find a sinister plot far greater than ever before. In more capable hands, the plot could have been tense and unrelenting — unfortunately, everything feels muted. Kellen is a cipher with no real personality, acting as a passive observer in all of these underhanded dealings, all leading up to an anticlimactic set-up for its inevitable sequel.

Unfortunately, muted is the best way to describe Killzone: Shadow Fall’s lackadaisical pacing. Moments that should be filled with excitement and bombast all fall flat. The terrorist behind the attack on ISA soil reveals himself on a television screen that features a looping walk-cycle animation, and the lip syncing doesn’t even match up. Shortly after this scene, you’re informed that there’s a terrorist bombing currently happening right now on a train, and yet, the plane you’re in slowly makes its way over to this supposed important, time-sensitive event, while your commanding officer just kind of stares at you.

Later in the game, you wait in a processing line as you make your way across the ISA-Helghan border check. What could have been a great opportunity for world building, set-up, anything really, turns into a line-standing simulator as you wait five minutes for each of the people ahead of you to be waved through — you might as well be waiting to pay for groceries. Nothing feels important in Killzone: Shadow Fall — big set-piece moments, story reveals, even the big twist at the end all feel tone-deaf.

Shadow Fall’s pacing issues extend further into it’s gunplay, though things at least start out promising. Killzone eschews the standard linear corridor-crawling gameplay of its other first person shooter brethren for a more open level-design, which on paper should encourage a more diverse set of tactics than your typical run-and-gun strategy. Instead, most of the levels devolve into running around aimlessly trying to find the next objective through increasingly confusing level design.

The guns are at least fun to shoot, each one offering different options than just the speed with which it sprays bullets. Most guns have a secondary firing option, and most of them take your standard weapon and turn it into something completely different — the most obvious is your default machine gun which also doubles as a long range rail gun. You’ve also got your OWL, a programmable drone that’s indispensable on the field. With a swipe of the DualShock 4’s touch pad, you can set the OWL to attack, fire an EMP, set up a shield, or attach a zip line. It’s a shame, then, that you’ll only ever use the attack function for about 90% of the time, as zip lines are only ever used for very specific places, and the shield is all but useless.

Still, the first few levels are decent enough. Shadow Fall looks gorgeous, though it does rely heavily on bloom lighting and lens flares for that added “wow” factor. You make your way through, not necessarily compelled by the content, but more because of the fact that you’ve got this shiny new game for your shiny new console, and you want to be constantly amazed by it. And, despite some flat gameplay sections, Killzone doesn’t do a bad job at selling the PlayStation 4’s technical might.

But somewhere around mission six, the entire campaign falls apart. The objectives are increasingly difficult to find, with a vague orange blip your only source of information as to where you need to go — how you’ll get there is for you to find out. Forced stealth, repetitive shooting galleries, and sequences that go on way longer than they should halt your forward progress into a crawl, and the last three missions will have you wondering how they ever made it past QA to begin with. If you are able to make it past the base-jumping sequence at the beginning of mission eight without cursing the names of the people responsible, you are a far stronger person than I.

At least the multiplayer fares better, looking great at a silky-smooth 60 frames per second. Maps are varied, though fairly claustrophobic, especially compared to the wide-open spaces of the campaign. There are only three classes and a handful of modes, but there are a wide array of weapons and perks to unlock. There’s just nothing new here that other FPS games haven’t done better.

We forgive launch games for being rough around the edges, falling back on rote gameplay or half-baked systems because they haven’t had the kind of development time that they need to be truly great. Shadow Fall, however, is the fourth entry in a long-standing, successful franchise, and none of the other games in the series were this painfully average. So what is its excuse?

Frustrating and generic gameplay rounds out an otherwise technically impressive package. Killzone: Shadow Fall should have been another solid entry in an above-average franchise, but instead it succumbs to all of the usual launch game pitfalls, and a decent though unimpressive multiplayer suite can’t save it from mediocrity.