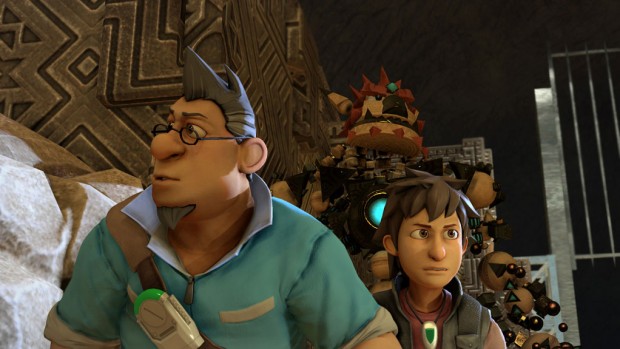 It’s ironic that Knack’s design is so rooted in the past, despite being one of Sony’s two flagship titles meant to usher in a new generation of gaming.

Oh, it’s pretty to look at, with an art style that wouldn’t seem out of place in a Dreamworks animated film. It’s clean, colorful, smooth, and it’s got panache that’s clearly its own. But the gameplay is ripped right out of the PlayStation 1 era of Crash Bandicoot-style platformers, and honestly, Crash was way more fun than this.

The world of Knack is filled with airships, goblins, and magical objects known as relics. No one knows where these relics came from or how they work, but that hasn’t stopped the humans from building their entire society, economy, and technology on the backs of these mystical objects. Knack is special, though. Found in a cave one day by a benevolent scientist, Knack can harness relics to increase his size and strength.

There’s been a long-standing war between the humans and the goblins, and the goblins have gotten a bit too uppity for their own good, pushing further and further into human settlements with increasingly more powerful weaponry. So it’s up to Knack and our rag-tag group of heroes to explore the picturesque landscape and figure out a way to stop the goblins once and for all. Knack’s story actually meanders quite a bit, engaging in numerous sub-plots — the evil billionaire out for untold riches, the source of the goblin weaponry, Knack’s past, and a supposedly dead wife that may be the secret behind all of this. I actually got a little twinge of Star Wars in there — the music and various vistas you’ll explore try to evoke that same sense of wonder and mystery, though it’s a bit closer to Phantom Menace than A New Hope. It’s all a bit predictable, but the plot is serviceable enough, and it’s actually got a charm that you can’t help but smirk at.

Unfortunately, it’s all ruined by the most aggressively mediocre game I’ve played in a long time.

At its core, Knack is action platformer in the vein of old games like Crash Bandicoot. You’ll move Knack down corridor after corridor, constantly funnelling into mini combat arenas. After dealing with the handful of enemies here, you’ll run down the next hallway or tunnel to the next mini combat arena. Occasionally, you’ll stumble upon a cracked wall or a discolored door you can smash open, leading to a secret room. It’s so linear, even Final Fantasy XIII is thumbing its nose at it.

The linearity wouldn’t be so bad if combat were actually fun or interesting in any way. Knack uses a grand total of three buttons in combat — one punches, one jumps, and one activates your sun crystal special attack. Other than moving with the left thumbstick and dodging with the right, that’s all you get. Enemies get progressively tougher, but basic combat tactics devolve into a simple “dodge-punch” routine.

And for a game that’s supposedly geared towards children, Knack is unrelentingly difficult. The first chapter starts out interestingly enough, slowly introducing you to the game’s mechanics. As you collect additional relics, Knack grows in size along with his health bar, becoming more powerful and able to take more damage. By the end of that chapter, I felt ready to take on the game’s challenges.

Within the first five minutes of chapter two, I’d died nearly a dozen times to enemies that will destroy you in two hits. Health is hard to come by, and enemies are ruthless, with one-hit kills the rule rather than the exception, making every death feel cheap, rather than deserved. A lackluster checkpoint system only piles on the frustration, as you find yourself repeating the same sections over and over again. You’ll find yourself collecting sun crystals each time you run through the same level, saving your special moves for when a particularly maddening set of enemies comes along, turning what should have been a combat palate cleanser into a “get-out-of-battle-free” card.

All of these problems would have been excusable if the gameplay got more interesting, but you see virtually everything Knack has to show you within that first chapter. Knack rarely takes advantage of the titular character’s ability to grow to enormous sizes, and doles out game-changing abilities on a level-by-level basis. One level allows Knack to sneak through lasers, another allows him to absorb wood and catch fire — but each of these moments are self-contained and are no more involved than what you’ve seen already. And once you beat the level, you never use that ability again. Growing in size increases your health bar, but it’s largely pointless when everything kills you in one or two hits anyway.

The unlockable gadgets could have been Knack’s saving grace, but once again, its execution falls flat. As Knack finds secret rooms, occasionally he’ll find a treasure chest containing a gadget piece or a crystal. Find enough pieces and you can fashion upgrades for Knack — stuff like a combo meter, or a gadget that helps you find health-restoring items when it gets too low. There’s even a brilliant social twist: if the item you found isn’t to your liking, your friends can offer up items they’ve found. These upgrades sound great, and would have done wonders to turn Knack’s basic gameplay on its head just enough to make things interesting.

But it takes forever to unlock anything. Most upgrades require at least five to seven pieces before they unlock, with some of Knack’s more powerful transformations requiring at least fifteen items. Considering that most levels have maybe one or two items hidden within them, and that you unlock them randomly, the only way you’ll be able to get access to most of Knack’s potential is through at least a second playthrough. I barely wanted to finish it the first time, let alone trudge through its linear, samey combat again.

Knack would have been a passable game twenty years ago, but now it just feels tired and uninspired. It’s a bland, boring adventure, made only more frustrating by its sheer difficulty curve and questionable design choices. There’s a soul somewhere in this golem, but it’s buried under a pile of ancient video game dreck.