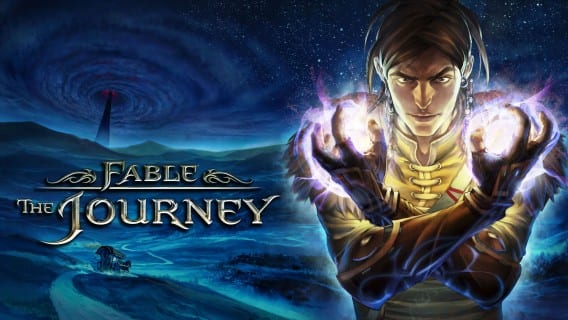 We absolutely loved Fable III.   Scoring an impressive 89%, the game featured familiar Fable threads of becoming the hero, making morality choices that affect the world, and ultimately becoming the all-powerful ruler of Albion.  Just after the May 11th 2011 release we hit E3 and saw the reveal of another Fable title – this one exclusively aimed at the Kinect.  Fable: The Journey looked to deliver on some of Peter Molyneux’s claims (the “Milo” demonstration) when the Kinect was first unveiled.  A major departure from the formula of the series, this title would be a linear romp focused heavily on motion controls.  Could the Lionhead team shift gears this hard and still capture the magic of the franchise?  After doing the ritual dance to get the lighting for the Kinect just right, it was time to find out.

The game opens with a quick introduction to Gabriel, our young, reluctant, and possibly narcoleptic would-be hero.  Along with his trusted horse Seren, Gabriel and his clan are taking a journey across Albion from the forests of Fairwood, through the dark crypts of Blackbarrow, to Echo Hills and beyond.  Gabriel, once again, has fallen asleep at the reins and awakes to find that he has been stranded on the wrong side of a collapsing bridge.   Set 50 years after the events of Fable III, the world still suffers from some of the evil that has gripped the world previously.   A vile tower sits menacingly in the distance, and Gabriel wants nothing to do with being a hero.  It’s funny how a quick conversation with long-time series staple Theresa (Zoe Wanamaker returns to voice the Seer) can forge the boniest of fledglings into powerful saviors.  With a new evil rising, it’s now up to Gabriel to assault the Tattered Spire and save Albion once again.

[singlepic id=9299 w=320 h=240 float=left]Fable: The Journey starts off with a little game of catch-up.   Gabriel is running late (again) and his brother insists that he catch up.  Starting with typical Lionhead humor, the Hobbes instruct you on how you’ll be playing this title.  First off, you’ll be sitting – a rarity for a Kinect title.  Secondly you’ll be using both arms, often simultaneously.  Spurring your horse with a whipping motion with both arms, you’ll set your ride in motion.  Whipping a second or third time will urge Seren to run even faster at the cost of your stamina pool.  You’ll pick up green experience orbs at any speed, red orbs at full gallop (it’s a 5 second burst, so timing is important) and blue orbs at a slow trot.   Slowing down is done by pulling your arms to your chest, as you would on a real horse.  Swerving left and right is done by pulling one arm forward and the other back, again, emulating real rein work.  Lionhead has said that there is over 300 miles of road so you’ll be spending a great deal of time dodging rocks, collecting orbs, and otherwise avoiding calamity, so get used to these controls quickly.

It isn’t all just dragging your cart around in Albion – you’ll soon find your powers expand well beyond avoiding ruts in the road.   After rescuing the Seer you’ll find yourself gifted with powerful gauntlets (and by gifted I mean grafted – they are permanently attached) that allow you to unleash magic.  Your first spell is part of the Bolt line, allowing you to whip blue missiles at your enemies.   You’ll do this by raising your right hand and then ‘throwing’ it at various points at the screen.  A second spell called Push is handled in a similar fashion by your left hand.   Since the Kinect is more than capable of spotting multiple inputs simultaneously (e.g. a second dancer in the Dance Central series) so using both spells together is as intuitive as you might imagine.  After some quick target practice (read: in-game Kinect calibration) you’ll also learn some other skills – Aftertouch, Shield, and Fling.   Aftertouch allows you to redirect your bolt in mid-air, causing it to home in on your target.   Fling allows you to use your Push skill to pull an enemy or shove them in a particular direction.  Eventually an enemy will close distance and try to rough you up, and Shield is your friend at that point.  Raising your left arm in front of your body as if holding a medieval shield will cause a magical barrier to erect in front you, deflecting all incoming damage.

In your journey there are many opportunities to use these skills in various ways.  Sometimes you’ll need to seal a hole that is spewing Rockmites by pulling an overhead stalactite down into the hive.  You’ll eventually square off against armored enemies, enemies with shields, mounted foes, and far more.  Spinning them around, yanking their shields, or otherwise disrupting them with Push while simultaneously lobbing Bolts at them is the order of the day.  As you move further into the game you’ll gain two more – a fireball (you wave your hand like you do to kick off the Kinect) and a spear (you pull your arm back as if to throw a spear).  These both have a voice component that works the better part of 75% of the time – a better stat than I could claim with the menu responsiveness. [singlepic id=9298 w=320 h=240 float=right]

As I said, you’ll spend a lot of time in the cart, so eventually you’ll have opportunity to take some of these shots at a full gallop.   While the pacing of the game is otherwise slow, there are plenty of moments where the action is a more fast and furious.  After all of that your shoulders (and horse) might need a bit of a break.   Certain points along the path will give opportunity to rest poor Seren.  Taking care of your most trusted friend gives a whole new set of gestures to play with.  You’ll pull splinters and arrows out of the poor girl, use your gauntlets to heal her wounds, brush dirt from her hide, feed her apples, and fill her water trough to keep her healthy.  These motions are intuitive, such as having you to rub your hands over the muddy portions, or hover near wounds.  You’ll also interface with the rest of the world, such as yanking chains to light gas lamps, grabbing the handles on chests and then lifting your arms to crack the lid, cranking an elevator, rotate dials and stone doors, or leaning left and right in your seat to dodge in that direction.   These are presented less as ‘minigames’ and more part and parcel to the adventure – a welcome departure from the way most games approach the Kinect.

“Does the great hero need more excitement? How about you come sit on my pointy hat?!”

[singlepic id=9297 w=320 h=240 float=left]While Fable III used a proprietary engine, Lionhead teamed up with Epic to utilize Unreal Engine 3 for Fable: The Journey.  I suspect that this may have assisted with the speed in which they’ve turned this title around.  The game retains the signature angular look of the previous titles, and graphically sets a high bar with a rock-solid framerate.  The environments are varied, giving the player setpieces in mines, forests, ruins, cities, and far more.   Cities such as Bowerstone choke the skies with smog in the distance, the dense nearby forests reaching tight into your pathways.  The character models are equally well rendered, giving each more personality than their excellent voice work would normally lend.

The game features some of the best use of the Kinect that we’ve seen thus far.  Similar to Dance Central, a great deal of effort of was put into the fidelity of the motion systems, and it has paid off very well.  Nearly all of the motions in the game are intuitive and easily understood with nearly no practice.  Any issues that I had with the controls are more systemic to the hardware platform than the game itself.  I can’t say the same for poor Milo.

When Peter Molyneux demonstrated the Kinect it was with a virtual child called Milo.  While many of the motion control promises have been delivered, voice controls are very hit and miss.  As somebody with no strong accent,  the Kinect should easily be able to handle my voice commands.  The game features some voice interaction, mostly in the menus, but I found that this was far more of a hassle than a feature.  You can tell the game “Upgrades” and have it navigate to this area, but this often introduced a semi-repeatable 8-10 second delay that looked not unlike a full system lockup before it’d actually put you into the corresponding menu.  Doing it with your hand gestures works every time.

“And they lived happily ever after. With little-to-no cannibalism.”

Lionhead has touted over 300 miles of road in the game, and as I mentioned, you’ll spend a great deal of time driving the cart.  Unfortunately, this was the most repetitive and somewhat dull portion of the game.  I found myself rather tuned out of the otherwise decent story during these driving portions, eagerly awaiting the next opportunity to sling spells at hobbes, balvarines, skeletons, dragons, trolls, wraiths, and other various denizens of Albion.   Just like the creatures in Black and White, and more recently the Dog in Fable II and III, Lionhead intended to have players bond with Seren, and while I liked the horse connection, the cart time just drained my interest and dragged the pace of the game down a bit. [singlepic id=9295 w=320 h=240 float=right]

As you gain experience in the game, combat gets even more interesting.  You’ll earn upgrades that you can apply to your gauntlets.  You can make your bolts bounce off of multiple targets, raise the forcefulness of your push, raise health for you or Seren, expand your mana bar, and other goodies.  Juggling balvarines while lobbing bolts that leap from target to target is pure fun.

The title takes about a dozen hours to complete (though you likely won’t run through the game in a single sitting as it’s a bit more active, swinging both arms around), and despite my greatest wish for Fable IV, this isn’t a bad offshoot.  The game doesn’t resort to stupid mini-games, instead properly integrating the Kinect into every aspect of the gameplay and storyline in a natural way.  Keith played the game at E3 and was impressed, but I was skeptical.  Now I’ve played the game and I’m a believer.  While the cart portions didn’t resonate with me particularly, the combat delivers in every way.  If you’ve got a Kinect gathering dust, you need to get it plugged back in.   While Fable: The Journey has its fair share of issues, it is certainly one of the best non-dance games for the Kinect.