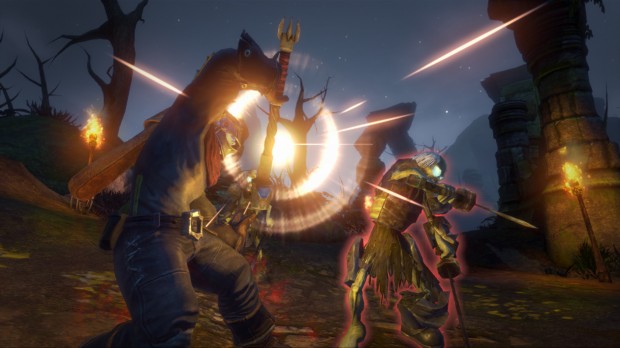 Fable was the title that would let you plant a seed and have it grow into a tree. You’d then grow with that tree, watching it mature as your character became a man. Fable was the game that would give us an RPG that would react to each and every decision we made, good or evil. It was to be, to quote Peter Molyneux, “The greatest RPG of all time.” I don’t begrudge Lionhead for daring to dream, and on September 14th of 2004, they released a game that captured all of our hearts. Did it live up to the deluge of promises and hype? How could it? In the end it didn’t matter; it was a good game that spawned an ambitious franchise. Celebrating 10 years of this storied series, this title sees the original spruced up with a bevy of new features and a new coat of paint. Let’s discover the world of Albion once again.

I’m not going to rehash our review from 8 years ago, except to tell you what is new in this package. If you played the original release of Fable you missed out on The Lost Chapters – a “Director’s Cut” version of the game that provided a few of the quests that didn’t make it in when the first version shipped. As the original Xbox didn’t have the DLC capabilities of its Xbox 360 or Xbox One brothers, you were forced to re-buy the game when it was re-released in 2005, or pick it up on the PC. Fable Anniversary includes all of this content in one package, fully integrated as a seamless product.

It isn’t The Lost Chapters content that will catch your attention with Fable Anniversary – it’s the graphics. Taking a game from a decade and two console generations ago and bringing it to life on the Xbox 360 is a challenge. Moving from 480p to 1080p is difficult enough, but reskinning the entire product with higher resolution textures and then adding a new lighting engine was just the start. I was immediately reminded of Microsoft’s own rebuild of Halo: Combat Evolved Anniversary in 2011, though I do wish Fable supported the ability to flip back and forth between the original presentation and the rebuilt for maximum jarring effect.  To showcase the rebuilt engine for you, I have included five minutes of uncut footage I captured during play.  Enjoy!

In addition to a significant bump in graphical fidelity, the team at Lionhead also stepped back into the audio studio to clean up the stereo original and remix it into a full surround sound experience. Eating crunchy chicks (you eat them to raise your evil level) now has a stomach-churning effect.

One of the biggest enhancements to Fable was the direct integration of Smartglass. Using a tablet, you are now able to hook directly into the game with an oversized map to provide information directly to your fingertips. The App shows the player, chests, demon doors, and more as you navigate through the environment, allowing you to turn off the in-game map entirely. Additionally, as you meet and interact with new characters you’ll see biographical information appear on your touchscreen. Working directly with Prima, this second screen experience also reveals everything you might see in a physical book, but presents it in an interactive format. Now finding all 30 keys, locating where your wife has wandered off to, or figuring out where all of the chests are is as easy as a glance to your iOS, Android, or Windows 8-based device.

While we are listing out everything new in Fable Anniversary I’d be remiss if I didn’t mention the new control system. Players have the option of using the original scheme, or a hybrid blend of Fable II and III. If you’ve played all three titles you’ll appreciate the option. The controls aren’t the big deal here, however – thank Avo for the new interface.

The team at Lionhead have rebuilt the admittedly clunky interface for the original game, providing a far more sleek approach to managing inventory, quests, background information, and more. Using the Xbox 360 bumpers and triggers you’ll easily slide between a tabbed system that is not unlike the blade approach of the operating system. While the character model’s framerate suffers in the menu system, the new interface is otherwise excellent. Toss in a checkpoint system and the ability to save to that last point at any time rather than the clunky “Hero Save” system and you’ve got your full roster of updates for Fable Anniversary. So how does it all come together? I’ve got good news and bad, hero.

I played through more than 20 hours of the game, re-experiencing the world of Albion as it was originally intended, but with all of the new bells and whistles, Xbox Smartglass at my side. While the Smartglass delivers on nearly all of its promises, it is the original Xbox comparison feature that falls the most short. The graphical update is significant but the comparison images on the Smartglass app are relatively tiny. It would be nice to see these screens large as life to really appreciate all the team has done to clean the title up for its HD re-re

lease. During those 20 hours, the App worked flawlessly, even reconnecting when I encountered frequent stability issues with the main product.

I have a new Xbox 360 Slim sitting in a well-ventilated area with a fan behind it to pull heat away from the chassis. Even with all of that, I locked up seven times over the course of that 20 hours of gameplay. Additionally I had several instances where the mission result interface didn’t appear at quest completion, I was busted for trespassing during business hours which kicked me out of town and locked up the game (but not the system), and there were more than enough sound hiccups throughout. One particularly egregious issue broke game logic during the bandit camp sequence where I couldn’t play to get the pass into Twinblade Elite’s Camp. I was forced to take the secondary option and pay $1000 for admission. The minigame wouldn’t trigger and Bennis the Gamesmaster would just wave at me. Had the secondary option not been here, this would have been a game-breaking bug, halting my adventure in its tracks.

While the interface for equipping armor and weapons, reviewing quests, or eyeballing the map is slick, the quickselect system is just plain aggravating. For instance, without rhyme or reason, the quickslot alternated between a crunchy chick (consuming it would give me evil points in its most concentrated form) and my health potion. Would I be healed, or damned? The quickslot interface was playing roulette with my fate, and hard-setting the items is not an option for the ‘reactive’ menu, only for the one you get when pulling a trigger. That said, I could only use half of those – I was never able to get my spells assigned on the right side of the screen, instead being forced to scroll through just one of my magic selections.

There was one upgrade that really put a smile on my face, even though it isn’t technically a gameplay-affecting change. The original Xbox system didn’t have Achievements, but the Xbox 360 is practically powered by them. In Fable Anniversary you are given what I’ll call “Flexible Achievements”. There are certainly achievements for tackling the story mission, but many of the side missions now have options. For instance, there is a sword that you can retrieve from a stone, and you’ll also have an option to become a recognized archery master. Doing one or the other gives you the Achievement, but no longer is both required. The names for these accomplishments are pretty hilarious – one is even called “I did it for the Cheevos” for wearing a dress with a specific colored wig during an event. They all feel rewarding and fun.

With all of its upgrades and love, Fable Anniversary really is the original Fable in a brand new suit, warts and all. This means small areas with loading in between each one, purpose built around the 64mb of memory available to the original Xbox, even when it has access to 256mb on the Xbox 360. It is very quest-driven, and focuses as heavily on its one-note button-mashing combat as much as the RPG elements that it rests its legacy on. The upgrades are fantastic, but Fable Anniversary seems to have a Lost Patch somewhere that addresses all of these stability issues.