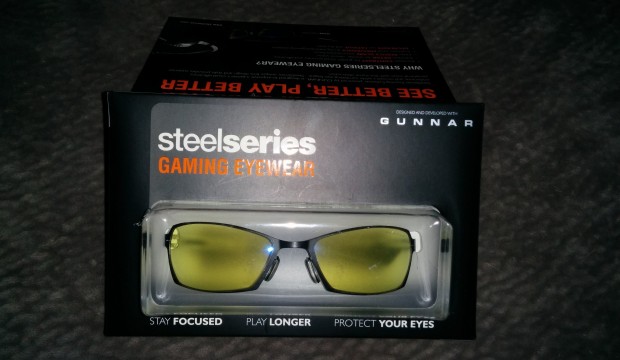 When I saw the Gunnar glasses I had two thoughts – “those look like my shooting glasses”, and “why would I ever wear those while I game?”. As somebody who’s had the Lasik procedure on his eyes after wearing glasses for a decade, protecting my “investment” is always top of mind. That means trying to use eyedrops when my eyes are scratchy, using glasses when I shoot, and blocking my face intently while fighting. Unfortunately for me, I also sit in front of a computer from roughly 6:00am to 11:00pm Monday through Friday, and even longer on the weekend. I didn’t realize it, but the reason why I’m so tired all the time is likely because of my eyes.

Gunnar made some pretty lofty assertions about their eyewear. It reduces eye strain, it blocks eye-drying artificial office lighting, sharpens detail with a slight magnification to help you focus, and somehow will be comfortable to wear. Even the tiny specs I wore for a decade eventually felt uncomfortable, leaving me rubbing my eyes at the end of the day. I had doubts.

The first indicator that I was wrong about my own assumptions happened when I pulled out my camera. Snapping a picture of the Gunnars in the packaging revealed that the lenses had completely frosted over due to the flash of my camera. I took a few more pictures from other angles and the results were always the same – like an iPad, there would be no flash here.

Picking up the Gunnars (I’m looking at the SteelSeries Scope) I was shocked at how light they are. My cheap plastic sunglasses were easily three time heavier, and my Oakley shooting glasses felt like lead weights by comparison. They weigh just 25 grams – the equivalent of 25 paperclips or four quarters. Surprisingly for this weight, the stainless steel frame feels sturdy. Most people who wear glasses keep a small toolkit handy for tightening the annoying screws that hold the arms to the frame. Gunnar went a different direction, creating what could be called a ‘unibody’ construction that eliminates all of the small welds, screws, and other common failure points of traditional glasses.

I borrowed a friend’s Gunnar Sheadog glasses that she received as a gift last year for a bit. The Sheadog features what Gunnar calls “Asian fit” which left them a bit tighter of a grip on my nose and temples. The nose piece on the Steelseries Scope has a more traditional and comfortable fit, which over the span of a full day of wear matters.

The contrast difference between the Gunnars and my natural eyeballs is slight. At first it caught me off guard as it is almost like picking up somebody’s prescription specs and throwing them on. The curvature of the lenses and the surface treatments combine with the tint to provide an optical illusion of magnification where there is none. What it does do is make things slightly sharper. As I type this review I can peer over the top and see the difference in the clarity of the letters. There is no ‘ghosting’ due to the bright white background of my screen. The question up next was how it affects gaming.

I’m always juggling several reviews, so I fired up the Titanfall Beta as my first gaming sample. The amber tint of the lenses reduced some of the more harsh white tones, but not enough to make me want to take them off. High speed motions and ‘normal’ gaming worked just fine, though I can say that it seemed like the lenses gave me a slightly better look at some of the gorgeous texture work in Titanfall. Tearing myself away from the beta, I popped in the vibrant and high-speed Lightning Returns: Final Fantasy XIII. Full of bubblegum for the eyeballs, the frantic and colorful title looked only slightly muted. After playing for a short while I stopped even noticing the difference. There is certainly abit of a ‘contrast adjustment’ while wearing the Gunnar Scope glasses, but it’s hardly going to change things on a console game at eight to ten feet of distance.

Shifting back to my PC I fired up something more tactical – Civilization V. With tiny units, lots of text and graphs, and a viewing distance to my monitor at just over two feet it’d put these glasses to the test. I glanced at my desk clock and found that I had entered Civ-time – it was 2am once again, only this time my eyes weren’t feeling like I’d left them in a dry roaster. If I wasn’t dead tired I could have gone “just one more turn” for a while longer, but it wasn’t my eyes that gave out first. I have a good idea as to why.

The average human blinks roughly 12 times per minute. When gaming that number is reduced to just five. That’s less than a blink every 10 seconds! As an experiment, just hold your eyes open for 10 seconds right now — painful, right? When you multiply that by the average gaming session of roughly two hours you can quickly find yourself with dry and itchy eyes. I’m not suggesting that the Gunnars do anything to make you blink more often, but they do block the bright incoming light from your monitor, and that seems to make a world of difference.

Over the course of two weeks of constant wear I came to a few conclusions. Would I wear them shooting? No. Do they affect color saturation? A little bit. Are they making me feel less like somebody is jabbing my eyes out every single day? Hell yes. In the end, I can’t rightly tell you why the Gunnars work, but I can assure you that they do. Is it the curve? Is it the amber tint? Is it the lens treatments? Who cares - they work, and I’m a believer.