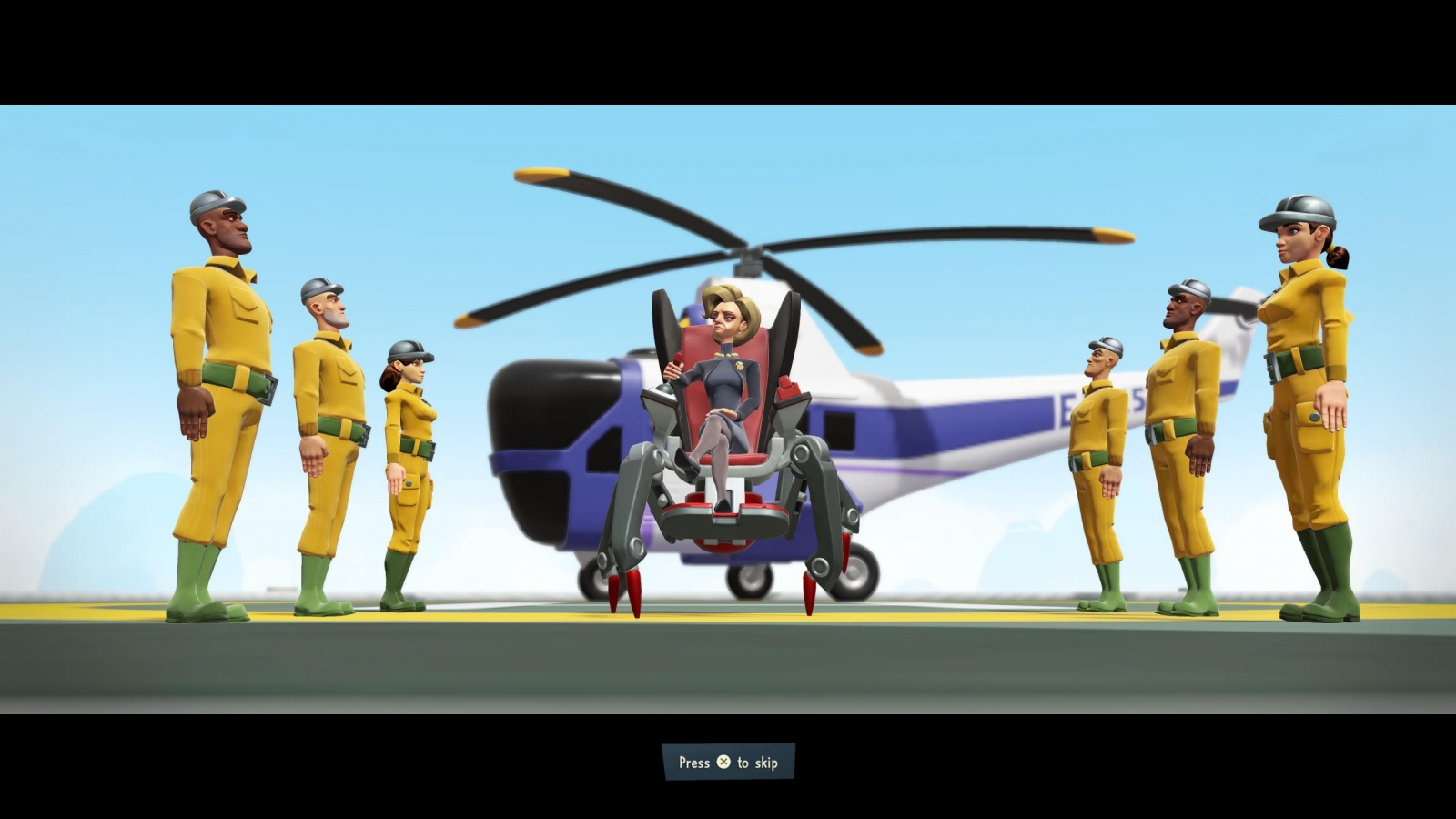 So you’ve just bought an island to build your evil lair on, but you don’t want to sit at a desk and manage your minions all day. Well, with Evil Genius 2 now on console, you can lounge on your couch and commit war crimes on your way to world domination! Ron Burke reviewed the game on PC earlier this year, but how does the game change to fit on the big screen?

The answer is, surprisingly, not much. As far as I can tell, the UI and HUD remain unchanged aside from a bit of compressing of menu icons in the toolbar. You simply navigate the PC style menus with a controller (or keyboard and mouse if you plug them into your console), which has some ups and downs. On one hand, I don’t feel like I’m missing anything or am playing a simplified version of the game. Console players have the exact same suite of tools available to them to build their Lair just as they wish.

On the other hand, it feels pretty clunky, at least at first. With a controller, your cursor is always in the center of the screen and you move the camera around with the sticks. You can also zoom in and out with R2 and L2, which apply some nice DualSense resistance when you reach the max zoom. Pressing X will select whatever you’re pointing at, and you can then use the D-Pad to navigate any menus that pop up. Pressing Triangle will bring up the main menu, where you can then select submenus to micromanage your Lair through research, minion assignments, objectives and side quests, and more. From here, pressing Square will enter build mode, which is where some problems begin to arise.

There are several different room types to build: everything from corridors and vaults to your chosen genius’ inner sanctum. Needless to say, you’ll be visiting this menu constantly as you expand. Unfortunately, each room type is placed on a menu in a straight, horizontal line which simply feels inefficient to navigate with the D-Pad. A lot of the menus are like this, and as used to them as I got, I still couldn’t help but feel they could have been reworked to work better. I certainly appreciate having the PC menus available to me, but it takes far more effort than it should to get such simple things as placing a staircase done. 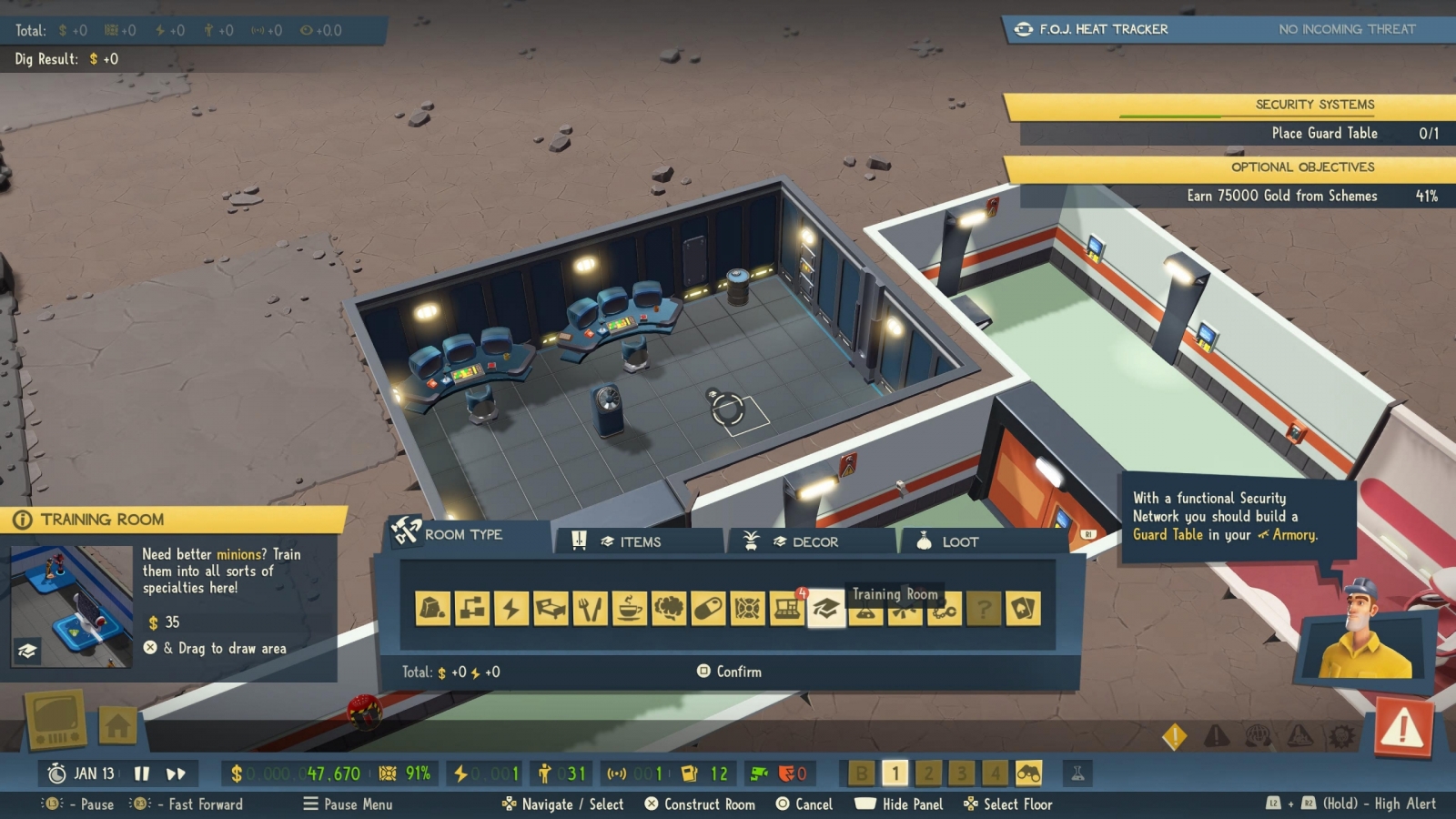 Being the exact same version as on PC comes with all the problems on computers as well. Like Ron said in his review, the game is glitchy as hell. Upon starting my first campaign and entering the tutorial, my minions killed some invading agents instead of kidnaping them which softlocked the game. After reloading a save, the game was fine for a while until one of the Super Agents came knocking. Super Agents are already incredibly annoying, spawning wherever they want in your Lair and causing havoc constantly, but the pyromaniac Blue Saint became a more permanent problem. Literally, at one point he spawned, completely invisible to any minions and guards, and simply wouldn’t leave forcing me to clean up his messes for the rest of my playthrough. I would have to reload a save from way too long ago to fix it at this point and it’s just not worth it to replay that much of the campaign.

My final gripe with the game is the World Stage, where you send minions off to accomplish tasks and send back resources across your ever growing global criminal network. For a while, I had trouble telling which areas had a scheme running and which didn’t, but I eventually figured out the latter pulse a faint purple. I feel like this should be included in the tutorial in some manner, but it’s certainly not the biggest problem with the game. 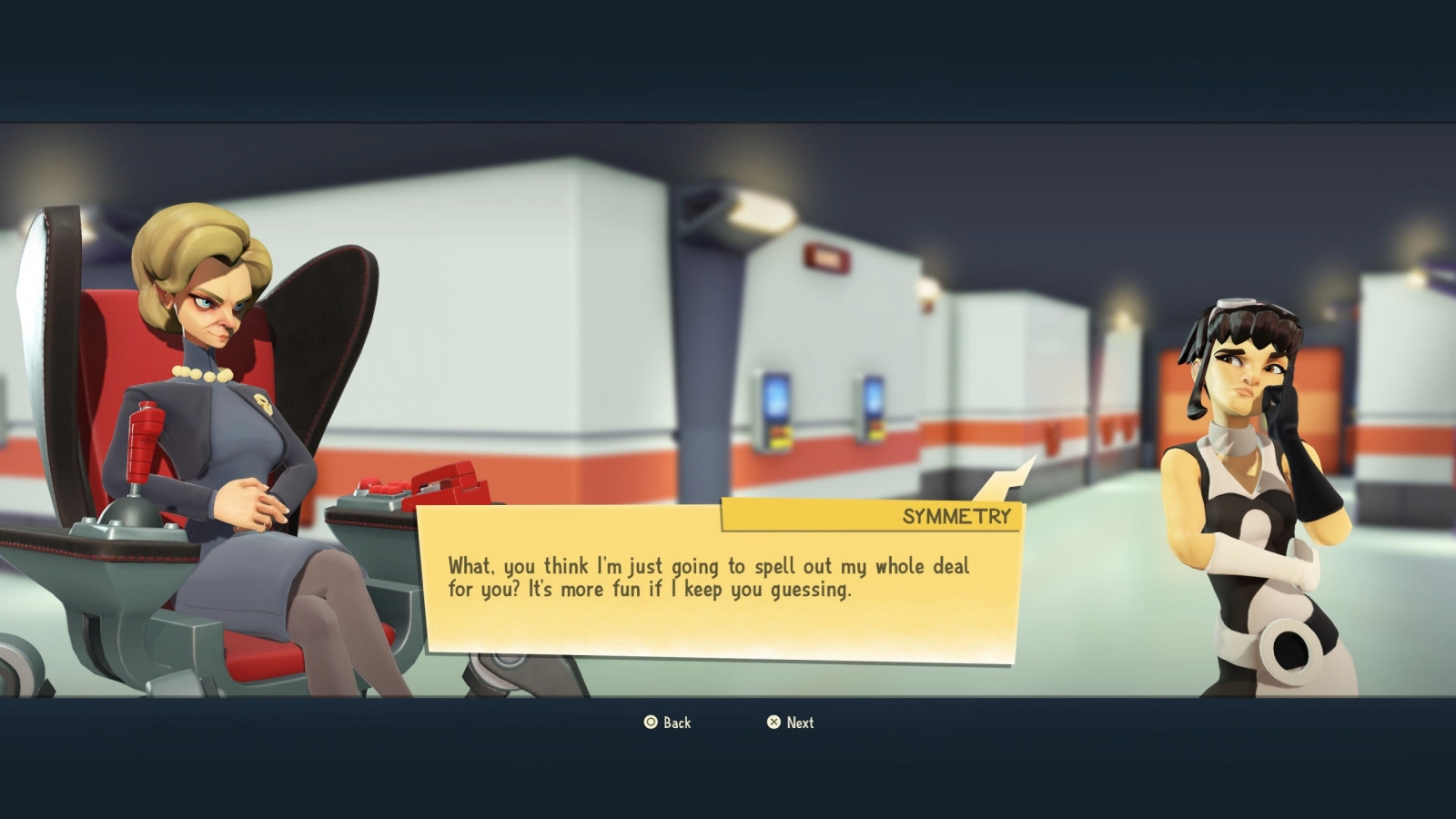 With all its issues, Evil Genius 2 is an absolute blast. I had other stuff to do the day I got the code, but I accidentally spent the entire day playing it was just so engrossing. Maybe my long play sessions resulted in a few more glitches than normal, like music and voice acting not playing after a while, but I just didn’t want to stop playing. As long as you go in expecting some rough edges and save frequently, Evil Genius 2 on PS5 is just as viable as the PC version.

For better and worse, Evil Genius 2 on console is exactly the same as on PC, complete with glitches and menu navigation. It needs a bit of work to smooth out the experience, but the game itself is a ton of fun and well worth playing, however you can get your hands on it.

David is the kind of person to wear his heart on his sleeve. He can find positives in anything, like this is a person who loved Star Fox Zero to death. You’ll see him playing all kinds of games: AAAs, Indies, game jam games, games of all genres, and writing about them! Here. On this website. When not writing or playing games, you can find David making music, games, or enjoying a good book. David’s favorite games include NieR: Automata, Mother 3, and Gravity Rush.
Related Articles: Evil Genius 2, Indies
Share
Tweet
Share
Submit