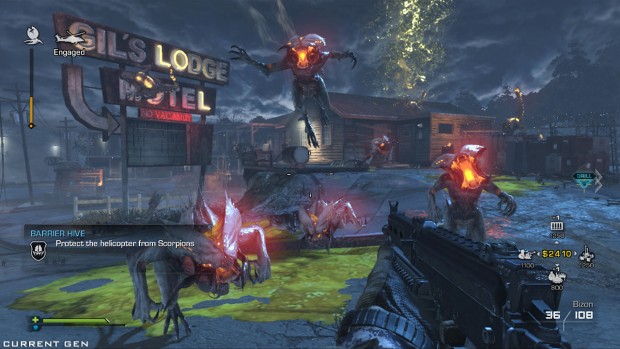 Another year, another Call of Duty. As long as this series continues to make Scrooge McDuck levels of cash, Activision will continue to churn them out. Call of Duty: Ghosts is the latest in a lineage of yearly sequels, and appears on pretty much every platform under the sun — yes, even Nintendo’s beleaguered Wii U.

Call of Duty: Ghosts is essentially the same exact game that you’ll find on every other console. You get your super-dumb campaign (There’s a dog! Explosions! Plot twists! Emotions!), full multiplayer suite, and bonus Extinction mode. It’s all here, and it’s just as competent as it is on other platforms. If you’d like to read more details about what those modes entail, check out our full reviews for PlayStation 4 and Xbox 360.

While it may not look as stunning as the next-gen versions of the game, it can still go toe to toe with the Xbox 360 version on most fronts. The frame rate is stable and the controls are perfectly functional. The textures, however, seem washed out in comparison; surprising, since Call of Duty: Black Ops 2 seemed to port over to the Wii U just fine in that regard. It doesn’t affect the overall experience too much, but it’s definitely noticeable, especially when you look at the myriad screens and displays that litter Ghosts’ war-torn landscape.

For lackluster visuals, you get the standard second screen experience, and once again, it works just fine here. Whether you use the GamePad’s screen for weapon loadouts and maps, or you decide to use it as a way to play the game on its screen while you’re lying in bed, it functions exactly how you’d expect. The text can be a bit hard to read, but luckily the game’s objectives don’t really require much analysis past “go here, press this button.” The GamePad doesn’t add much to the overall experience, but being able to play the game on its screen is a nice touch.

The Wii U version of Ghosts brings another feature to the table, though this one’s not so good: there is virtually no one playing online. The highest number of simultaneous users I counted was around 1700 people, and if Black Ops 2 was any indication, it’s not going to get much better. The multiplayer runs great, and I never experienced any problems with the actual playing of it, but it’s a bit hard to recommend such a multiplayer-centric title when there’s no one actually playing online — which is pretty sad, because this problem is entirely out of the hands of the developer.

Once again, we run into the same problem we did with Black Ops 2. The Wii U version of Call of Duty: Ghosts is a perfectly fine port, and its added second screen features almost negate its washed out textures. But if you’re looking for a competitive multiplayer experience on the Wii U, you won’t find it here -- the audience just doesn’t exist.