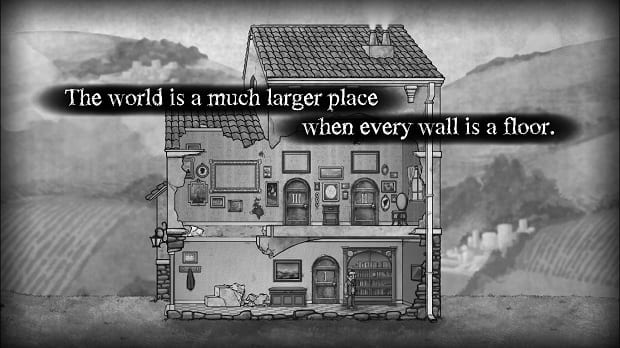 So how’s gravity been treating you lately? Unless you live on another planet, it’s probably being pretty gentle. Your feet are still planted firmly on the floor and the floor is still firmly attached to the ground. Take comfort in that fact while you can, because everything changes the second you step into The Bridge.

The Bridge is a 2D puzzle platformer that initially seems easy enough: move from point A to the door at point B. Don’t be fooled by the simple premise though, this isn’t your ordinary platformer. The levels feature architecture that seems straight out of an M.C. Escher painting, and you’ll have to manipulate gravity, physics, and perspective to solve each puzzle. Similar gravity-bending mechanics have been seen before in other indie titles like And Yet It Moves, but the developers of The Bridge manage to bring something different to the table.

[singlepic id=10878 w=280 h=210 float=left]The game starts off with an apple falling onto your head, Isaac Newton style. This serves to introduce you to your greatest enemy and strongest ally in The Bridge: gravity. You’ll navigate each level using two sets of keys. WASD will control your character, and the arrow keys will allow you to rotate the level itself, turning walls into floors and floors into ceilings. It’s a simple control scheme, but it works well.

As the game progresses, more challenges are added. The structures you’ll have to navigate [singlepic id=10882 w=280 h=210 float=right]become more complex, and new game elements are introduced. In several levels, you’ll need to collect the key(s) required to unlock the door before proceeding through it. By level three you are introduced to the Menace, a scary-looking stone ball that kills you upon touch. This adds another dimension of strategy to your manipulation of the game world, as you’ll need to take caution to avoid having a Menace roll towards you. No worries if you do make a mistake though; holding down the space bar will allow you to rewind time and try again.

[singlepic id=10879 w=280 h=210 float=left]Your interactions with gravity become more complex still, with the introduction of Inverters which flip both you and the game world 180 degrees. You’ll move from standing on the floor of one room to the ceiling of the room below it (which is now, of course, a floor).  Items like keys and doors can be inverted too, only accessible to you when your inversion matches theirs. Menaces and keys operate under opposite gravity when inverted, floating up when gravity would dictate down and vice versa.

That’s not all though. You’ll also encounter gravity-bending vortexes which suck in anything nearby, and gravity-defying veils which allow you to remain in place while rotating the world around you. All of these elements and more combine over the game’s 24 levels to provide a challenge that is difficult, but very satisfying. The frustration of struggling to solve a puzzle can be alleviated, if you wish, by reading a series of hints available in the menu.

Visually, the game looks like a series of M.C. Escher sketches. The world is in greyscale and you [singlepic id=10880 w=280 h=210 float=right]are literally drawn into it at the start of every level. When you die, an eraser smudged remnant of yourself remains. Combined with the soft, slightly eerie instrumental soundtrack, the graphics give The Bridge a distinctly indie, almost artsy atmosphere that just works.

The game’s puzzles are divided into chapters, which are separated by short cutscenes which hint at a storyline but leave some of the details to your interpretation. After completing the initial 24 levels, you will unlock a more challenging “mirror” mode that allows you to play the entire game again with an added level of difficulty and an alternate ending.

Overall, The Bridge manages to avoid crossing that fine line between challenging and frustrating, making you work to solve each puzzle without wanting to break your keyboard in the process. It’s an enjoyable experience that encourages you to think differently, and then rewards you for doing so.