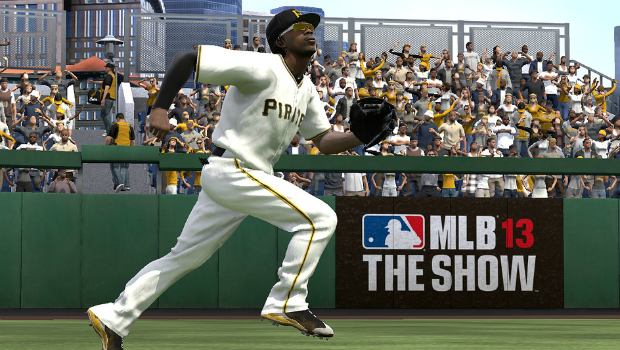 From the cracking bat of the first home run to the tension of a 9th inning pitch, MLB 13: The Show delivers a world class baseball experience. It is the perfect blend of the fan experience and the life of a big league dreamer, making for an exciting and realistic romp with the boys of summer.

From the moment the teams are picked, MLB 13 begins to showcase its extraordinary presentation. The sounds of the game and the crowd place you right in the dugout. The commentary is by far the best in any sports franchise, providing quick information and adding to the tension of big plays or innings.  Led by newcomer Steve Lyons, the commentating crew speaks of the action on the field without the common breaks or pauses of other games.  The camera angles, in-game displays, and action replays rival professional broadcasting teams. Coaches will move quickly to dodge wild foul balls, as the camera pans and reveals a peanut vendor handing a customer some expensive snacks. A fan in the stands will attempt to catch a Home Run at the wall before the opposing defense can secure the Out. These are only two of countless scenarios that help create an authentic stadium experience.

[singlepic id=10994 w=320 h=240 float=left]A variety of updated and new play modes puts players into the action at whatever level they choose, be it triple-A scrub to hotshot general manager. Want complete control of an organization? Franchise mode provides seasons of play mixed with scouting, trading, free agency, and other tasks needed to have a championship franchise. Free agency sound boring? Play without all the extras in Season mode, or skip the regular season all together and make a run for the pennant in The Postseason. For those looking for the experience of becoming a big leaguer, the Road to the Show allows players to create a athlete and take him from Triple-A obscurity to the seldom reached pinnacle of super-stardom. Focused tasks throughout the season, as well as in-depth analysis of your progress, provides you with a map of what you are capable of and what needs work. Complete tasks and wow your coaches at different levels to rise through the ranks.

For online fans, there is standard head-to-head play as well as two modes of league play. The Online League allows you and up to 29 others to pick a team and enjoy the competitive gauntlet of the baseball season. The second online league, Diamond Dynasty 2.0, is a card-based massively-multiplayer league. Players customize their team from the banners, uniforms, and stadium walls. Players collect cards representing players to build teams to go head-to-head against others online. Cards come in two types; MLB cards are active players with their respective stats and abilities, while Dynasty cards are customizable players that you name, design, and build through experience. Two key improvements were made on last year’s Diamond Dynasty mode. Pitcher cards are designated as starters, relief, or closing, allowing players to activate the correct type of pitcher they need. A problem with players quitting after being obliterated has been addressed with a 10 run, 3 inning mercy rule and stats being kept inning-to-inning, rather than game to game.

[singlepic id=10995 w=320 h=240 float=right]The gameplay is largely unchanged from the previous installment, but a few improvements and additions add to the high quality of the product. The pitching is improved with a new Button Accuracy Meter, which gives the players control over the power or accuracy of a pitch by the press of the X button. Pitchers are also provided with in depth batter reports for the first time, giving them more information for game preparation. It’s impossible to become bored with the variety of pitches and the dynamics of each at-bat.

The Vita edition of The Show is largely the same game as the PS3 version, without the online league modes available. The in-game experience is unchanged from version to version. With the use of cloud storage, games within Franchise, Road to the Show, and Season mode can be played on both platforms. In addition, a Home Run Derby can be played online among friends across platforms. While nice for its portability, the Vita version doesn’t add anything to the main game and is not a necessity.

New difficulty profiles allows quick setup for beginners or long time The Show players, and quick movement between the two cuts down on time in menus and shores up more time in game. This alleviates a confusing logjam of options that many users will not be able to navigate, as well as the lack of a useful manual. The game can be tailored to someone who has never played a sports game before, up to someone who hasn’t played anything else with a push of the button, and the game becomes drastically different from mode to mode. As you play, you’ll earn experience and ranks in different aspects of the game. This dynamically changes the difficulty, so that strong pitchers who can’t bat can be compensated for with their own custom difficulty setting that your play develops and modifies.

A triumph, MLB 13: The Show blasts the competition so far out of the park that the grazing cows out on the countryside get a souvenir. Every second of the game is exciting and enticing on different levels. The sights and sounds are as authentic as it gets, and the gameplay is exquisite and precise. This is a baseball fan’s most cherished dream and a must own game for any sports game fan, if not for any fan of crystal quality video games.