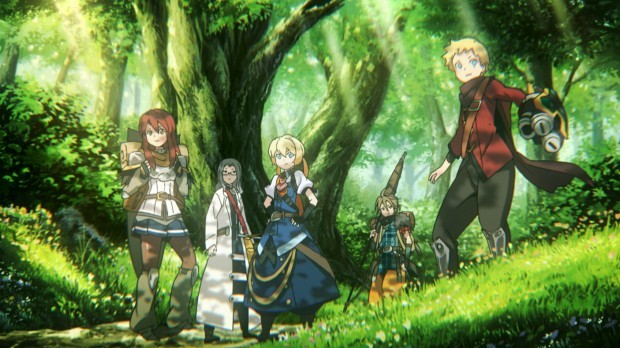 Six years ago, Etrian Odyssey created a challenging retro dungeon-crawler that has seen several sequels already, including one just earlier this year. Etrian Odyssey Untold: The Millennium Girl is the most recent addition to the series, a remake of the original Etrian Odyssey with some pretty major additions, including a story and static characters. Players can still relive the glory days by creating their own characters and foregoing the story, or alternatively they can enjoy a fresh take on a classic game. Etrian Odyssey Untold: The Millennium Girl proves to be one of the most lengthy and challenging entries in the series.

In Etrian Odyssey Untold: The Millennium Girl, you are an explorer, and are tasked with crawling through floor after floor of increasingly complicated dungeons with more and more powerful enemies to greet you every step of the way. Additionally, the player is responsible for mapping each dungeon themselves, which becomes more difficult as dungeons become harder to navigate. It’s an appealing idea, especially for the hardcore RPG fan looking for a challenge.

The combat is frequent and turn-based, but a very well-designed combat system requires players to strategize how they use each of their party members to make the team as formidable as the enemies they face. After being lost in a dungeon and fighting the same few enemies for an hour, you’ll probably start to get frustrated, but the challenging and extremely long boss fights make it all worth the trouble. In addition to the more mundane challenges of dungeon-crawling, the player also faces F.O.E.s, or “Formido Oppugnatura Exsequens” (Yes, that is what they’re called), which stalk the halls of the dungeon and stalk the player, and ultimately force a boss fight upon the party. It’s a cool element to an already difficult game, and is the game’s greatest payoff by far for all of the hard work you’ll have to do to advance.

For all of the game’s strengths, its weaknesses are almost as numerous. For one, the most noticeable addition to this remake is the option to have preset characters and a story, which is simply terrible in almost every way. For one, the storyline is as predictable and cliche as they come. The Millennium Girl, for which the game is titled, has amnesia and is trying to recover her past, and the rest of the characters are equally tired and boring. The game isn’t poorly written, it just isn’t interesting. While the cut scenes look nice in 3D, they are honestly just boring. Additionally, using the preset characters actually limits your playthrough to only experiencing five of the game’s eleven classes, and is somewhat disappointing in this regard. The whole experience makes one wonder why a story was added if they didn’t even try to do it well, and even calls into question whether we needed this remake at all.

Putting the story aside, it takes a very particular type of gamer to appreciate Etrian Odyssey Untold: The Millennium Girl, as it can be repetitive, frustrating, and tedious to chart maps in a dungeon for hours on end. My playthrough of the game took about fifty hours in total, and at times I grew so sick of it that I had to put the game down and wait a few days before returning. In the end, the players who would like Entrian Odyssey will love what the game has to offer and people who don’t get it won’t be swayed by this title.

The gameplay in Etrian Odyssey Untold: The Millennium Girl is some of the best in the series so far. It’s the same tried-and-true formula that players are accustomed to with a few changes, primarily with the addition Grimoire Stones–magical items that allow characters to learn abilities used by enemies and allow for a little customization of an otherwise-static party during the story version of the game. Characters must cooperate with one another in order to survive. How you do that is all up to you, which makes devising your personal strategy a central, and fun, part of the game.

The visuals in Etrian Odyssey Untold: The Millennium Girl honestly aren’t amazing, but they do well enough. Cutscenes are your typical anime animations, and the 3D is only utilized minimally, but doesn’t hurt how it all looks. Meanwhile the gameplay is less good-looking, as it includes only hallway after hallway. The enemies range from the well-conceived to the bizarre and confusing, like one of the earlier enemies, an evil camel that looks terrifying and hilarious for all the wrong reasons. It’s not all bad, but it’s nothing to write home about and some are just laughable.

The same can be said of the auditory elements of the game, as repetitive soundtracks follow you through each hallway and battle, and character voices are fittingly as cliche as the character’s themselves. Etrian Odyssey Untold: The Millennium Girl is a really long game, and I can’t really fault them for not developing a soundtrack that is enjoyable for 60+ hours — at times I chose to play with the sound off, so take that for what you will.

Overall, Etrian Odyssey Untold: The Millennium Girl is a good remake of the game that started it all, but all of the new elements that were added only serve to make drag the game down. I enjoyed the small amount of time that I spent playing the classic mode far more than I did in my entire playthrough of the story mode. However, where the new elements fail, the refurbishing of the old game is strong enough to cover the game’s faults and then some. The combat system and retro dungeon delving have a lot to offer, especially with what I would estimate to be a 60+ hour-long, and all for a $40 price tag.

Fans of the JRPG genre who are looking for a challenge and aren’t bothered by the facepalm-worthy tropes will be delighted with the experience. This game won’t do much to capture anyone who isn’t already interested in the series with its very confusing mechanics and foreign gameplay structure.

Etrian Odyssey Untold: The Millennium Girl was reviewed using a pre-release code provided by the publisher.